Jesus as Guest: Hospitality in the Ministry of Jesus

Jesus as Guest: Hospitality in the Ministry of Jesus 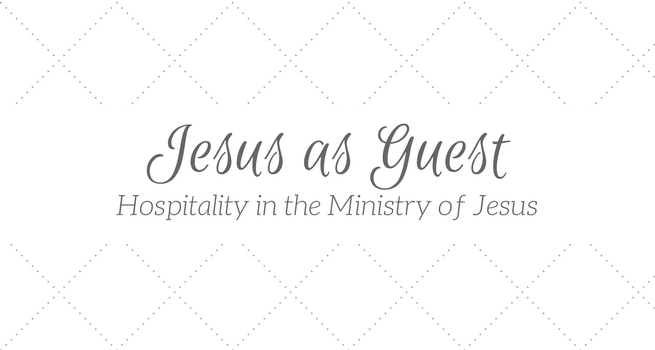 The Gospel accounts of Jesus’ ministry are filled with stories of hospitality — Jesus entertained and Jesus entertaining. In the Gospel of John, our first and last glimpses of Jesus show him hosting his disciples. After his baptism, he entertains his first disciples at his home after catching them trailing him like curious fans, and after his resurrection, he is found on the shore of the Sea of Galilee preparing fish and bread for his weary disciples coming in from a night of fishing.[1]

Throughout, Jesus models the hospitality he teaches, sharing food as he reveals himself to his disciples, serving them as he teaches them to minister to others. His teaching is in conversation, often one-on-one, preaching to the multitudes but revealing his identity to individuals in intimate conversation.

In Mark, Jesus first experiences hospitality as the guest of his first disciples, Peter and Andrew, along with James and John (1:29-31). He is in Capernaum and has had a remarkable morning in this first Sabbath of his public ministry. His teaching in the synagogue has attracted the admiration of the people who note that he teaches with authority. A dramatic casting out of demons further demonstrates his authority even over unclean spirits, and while his fame spreads, Jesus escapes the commotion and seeks hospitality in the house of his friends. What would he have wanted to find there? A bit of peace and quiet, perhaps. Refuge from the crowds. A quiet conversation with his new disciples who should certainly have some questions about what had just happened there. And food for sure. Sabbath dinner. But nothing is on the table.

The narrator tells us that Peter’s mother-in-law is sick in bed with a fever. The disciples don’t mention it until they get to the house. Perhaps it is not serious; she is just down with a bug. Though a fever was often regarded as punishment for sin, sometimes a fever is just a fever.[2] They don’t ask Jesus to heal her. They have just seen him cast out demons, but disease is something else again, no reason to think that, too, is in his repertoire. Their explanation seems more in the way of apology that there is no food on the table. They will need to scrounge the cupboards for peanut butter and jelly. The cook is out of commission.

But Jesus responds immediately with a flurry of verbs. He proceeds directly to her bedside, takes her by the hand (some say “seizes” or “grasps” her hand), and lifts her up, and then, the narrator says, “the fever left her.” The translation of the verb “left” is too mild. The literal reading is that “the fever forsook her,” or fled from her, much like the evil spirits had fled from the body of the demoniac.[3] In both cases, Jesus sends the demons and the disease scurrying, showing his power over the forces that destroy life and health. M. Eugene Boring explains, “As the fever had represented the leading edge of death, the story represents the leading edge of the divine power at work in Jesus’ resurrection.”[4] The word “lifts” might be better translated as “raises her up” because it is the same word used to describe the raising of the dead, including Jesus’ own resurrection. He raises her to new life.

And Peter’s mother-in-law swings into action, too. The fever leaves her, and she begins to serve them. Aside from the threat to her life and health, the fever has robbed her of her work. She is unable to provide hospitality to the guests in her own home, the work that shaped her days and gave her identity and dignity in the community. Jesus restores that when he grasps her hand and lifts her up.

She immediately begins to serve them. Most people Jesus healed respond with rejoicing and praise, even when he tells them to be silent. But she serves him. What does she do, exactly? Certainly she prepares a meal. This may sound a bit patriarchal, raising up a woman to cook dinner, but Mark’s audience would have seen a person restored to full vigor and life, joyfully, energetically, and with gratitude serving her guests.

But there is more to it than that. I think Mark’s narrator is throwing a knowing glance at the reader and asking, do you get it? The verb translated “served” is the great work of ministry to which we are all called. It is the same word used of the angels who minister to Jesus after his victory over Satan in the desert (1:13). Jesus had angels to minister to him at the beginning of his work of salvation, and at the end of his ministry, the women who are witnesses to his crucifixion are named and honored as those who followed him and served him (15:41). The women and the angels form bookends around the ministry of Jesus, ministering to him at its beginning and at its end. Perhaps Jesus has just called his first female disciple.

I wonder, as Peter’s mother-in-law ministered to him that day, if she might have washed his feet. The story says nothing about it. But it seems possible. They had just walked in the door. No one else was there to do it. Certainly not the disciples. It was considered the task of a servant, often of a woman servant. If she did, she would have been the first disciple of Jesus to get his message that he “came not to be served but to serve “(10:45). That “whoever wants to be first must be last of all and servant of all” (9:35).[5] As Oswald Chambers explains it in My Utmost for His Highest, “The real test of the saint is not preaching the gospel, but washing disciples’ feet.”[6] Jesus modeled it as the host at the Last Supper, his last opportunity to teach what ministry meant, what discipleship meant. While the disciples were still asking who will be the greatest and seeking some grand work to do, “Jesus . . . took a towel and began to wash the disciples’ feet.”[7]

I wonder if Jesus might have thought of this woman as he was washing his horrified disciples’ feet at his own Last Supper. “This servanthood thing you keep talking about, Lord, certainly you don’t mean that literally. Not the actual work of servants. Not the work of women.” But there he is, kneeling before them with their dirty feet in his hands. Apparently he means it. Literally. “For I have set you an example, that you also should do as I have done to you” (John 13:15).

Mark places at the beginning of Christ’s ministry a little story of what ministry means. In her ministry to Jesus and the disciples, this nameless woman may be providing a model of what ministry looks like, a ministry of service we can maintain in our homes and in our lives. As we welcome the stranger, we may find ourselves entertaining Jesus and be healed of our own fevers, restored to our work that we realize is indeed the work of a servant, the work that Jesus took upon himself and called us to do as his disciples.

Beverly Beem has recently retired from the English department at Walla Walla University in College Place, Washington. The above essay is a follow up to Jesus as Host which appeared on Spectrum in October 2016.