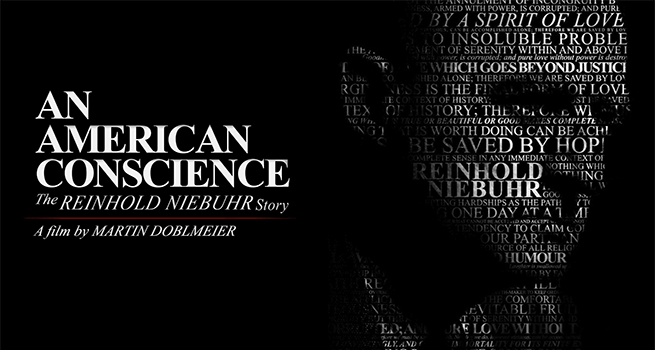 Filmmaker Martin Doblmeier is well known among many Seventh-day Adventists since making three films about the denomination. Doblmeier’s Adventist trilogy has appeared on PBS television, and the films were screened for capacity crowds at Loma Linda Seventh-day Adventist Church. Doblmeier is set to return for the Southern California premiere of his latest film, which is on American theologian Reinhold Niebuhr. The screening will take place Saturday, March 11, at 4:30 pm, in the university church. Here is a recent interview with the award-winning filmmaker.

Question: You have made a wide range of religious films during your career; several of these are biographical, such as your Bonhoeffer film. Why did you decide to make a film about the American theologian Reinhold Niebuhr?

Answer: Reinhold Niebuhr has been a hero of mine for decades. Over the years, as I continue to revisit his writings and draw upon them as I mold my own thinking, my admiration for his work continues to grow. I don’t always agree with Niebuhr, but he is the kind of figure who needs to be included in any meaningful conversation about ethics — especially Christian ethics — power, justice, and responsibility.

And making a film about Niebuhr afforded me an opportunity to explore mid-20th century America, one of the more defining periods in our nation’s history, through the lens of a truly brilliant theologian. What you have to appreciate is that while Niebuhr’s times may be different from our own, human nature seems to change very little.

For someone who may not be familiar with Reinhold Niebuhr, what are some of the theologian’s ideas that you have come to appreciate most?

Reinhold Niebuhr was one of the most inspiring figures of the 20th century because he did not see the events of his time in isolation—he saw them through a much broader lens. Niebuhr was versed in history, ancient history as well as American history, and that gave him perspectives others lacked. His early roots were in theology and that provided a language and a foundation of faith that centered him. Many of his critics would see in Niebuhr’s writings great political wisdom but could not accept that all of it was predicated on his understanding of the presence of God in the world. Niebuhr himself never lost sight of that reality, and I admire that. And he traveled and spoke widely, so his insights were not based merely in his scholarship but had a genuine human dimension, honed by countless talks and pastoral engagements. It was the combination of it all that made him unique.

I am intrigued by the title of your film: An American Conscience. What led you to this title, and how did you come to see Niebuhr as America’s conscience?

When I initially began to think about the arc of the film, I kept coming back to the idea of how Niebuhr emerged as a moral conscience — an American conscience — for people of his era wrestling with enormous and complex issues. What is remarkable is that Niebuhr was both a theologian and a public intellectual, versed in history, political science, and philosophy as well as theology. The media often sought Niebuhr’s opinion on some of the most vexing issues, such as whether to intervene in Europe when World War II began, how to handle the escalating tensions of the Cold War, and the ever-present threat of nuclear annihilation. They turned not only to Niebuhr but also to Billy Graham, Martin Luther King, Jr., and other religious voices who could elevate the conversation and thereby transcend all the political rancor of their day.

Many believe the place for a “public theologian” is gone in our own times. But I am convinced that in pushing the religious and theological perspective to the sidelines, we may have lost a vital component in our national conversation. There are insightful, moral voices with strong intellectual foundations present today — people like Cornel West, Jim Wallis of Sojourners, Tim Keller, Rabbi Jonathan Sachs, and others.

Unfortunately, the media today is more often inclined toward conversations that are highly partisan, political charged, and combative rather than broadly insightful and universal. Public theologians who seek that higher ground no longer have a place to pitch their tent. America can only benefit from acknowledging that the great dilemmas we face today deserve more than only political and economic perspectives.

Throughout much of the 20th century, millions of Americans turned to Niebuhr as a voice they trusted — a moral conscience — who spoke with insight and eloquence on the most critical issues of the day. Presidents took counsel from his observations, and policy makers found comfort in his balance of hope and realism.

Why do you think Niebuhr’s theology had such a broad reaching influence, even with United States presidents like Jimmy Carter or U.S. Senators like John McCain?

In many ways, one of the traps with Niebuhr is that he changed his mind, so when you ask people why they like Niebuhr, they need to clarify “which Niebuhr” they favor. The early Niebuhr was so shocked by the horrors of World War I that he declared himself a pacifist. He was so committed to economic justice that he favored socialism. But later in life, when he came to the understanding of the ever-present inclination toward evil that is common to all our natures, he called for military resistance toward the Nazis before others recognized the pending disaster. Later too, he saw Communism as an evil that needed to be resisted. Niebuhr was willing to change as the realities around him changed. For me, that is something to admire, not denounce.

Jimmy Carter says that one of his favorite Niebuhr quotes is, “It is the sad duty of politics to establish justice in a sinful world.” In many ways, that sums up Niebuhr’s thought: his commitment to use the system to affect change while accepting the realities of our human condition and our inclinations toward injustice.

Senator John McCain is known to quote Niebuhr about the presence of evil in our world and that overcoming evil may require force. But it is President Barack Obama who is often credited with the recent Niebuhrian revival, calling Niebuhr his “favorite philosopher” and quoting at length from Niebuhr’s The Irony of American History. Obama, however, emphasizes Niebuhr’s call for humility in national affairs  and the acceptance that, as a nation, America cannot overlook its own share of responsibility.

All this only contributes to the mystique around Niebuhr that seems to cross generations. Today, writers like E.J. Dionne of The Washington Post and David Brooks of The New York Times continue to keep Niebuhr present in the headlines by infusing his writings into the issues of our own day.

You screened your Bonhoeffer film at the Loma Linda University Church several years ago. Do you see any connections between these two films? Bonhoeffer and Niebuhr were friends.

In the film I say that Reinhold Niebuhr and Dietrich Bonhoeffer were friends, although it is clear the friendship did not start off well. Bonhoeffer came to Niebuhr’s Union Theological Seminary with a certain skepticism about how theology — or the lack of it — was taught at Union. Bonhoeffer was quite disturbed by the fusing together of theology and social action. But over time Niebuhr’s brilliance and genuine commitment to the challenge of Christian ethics inspired a change of heart in Bonhoeffer. So when Bonhoeffer returned to Germany just as the Nazis were ascending to power, Niebuhr and Bonhoeffer stayed in contact, and that afforded Niebuhr insight into German events that others did not have.

Of course, the great tragedy is that their lives would take very different paths. Niebuhr lived a full life  and wrote with honesty and courage throughout it all. And while he did suffer some reprisals at the hands of an anxious American government, it was nothing like the restriction Bonhoeffer lived with during the Nazi era. And Bonhoeffer’s life was cut short when he was executed at age 39; whereas,  Niebuhr lived to almost 80 years of age. So for Niebuhr we have a body of work to reflect upon, and for Bonhoeffer we can only imagine what theology he would have developed had he lived a much fuller life.

A poignant part of your film is Niebuhr’s enduring friendship with the Jewish philosopher Abraham Joshua Heschel. Many Spectrum readers are aware that Dr. Roy Branson, the founder of Adventist Forum, marched with Heschel at Selma, Alabama in 1965. How did Niebuhr and Heschel become such close friends? And what may this say to us today about inter-religious friendships in the 21st century?

Reinhold Niebuhr and Rabbi Abraham Heschel were able to forge a deep friendship that in many ways was extraordinary in terms of American religious history. Niebuhr used his notoriety to bring attention to Rabbi Heschel’s book Man Is Not Alone. Heschel was then only an emerging author. Out of that initial professional encounter grew a personal relationship based on respect for each other’s scholarship and a mutual trust that allowed them to share ideas at the deepest and most vulnerable level. It is a hopeful sign that religious leaders who represent different traditions not only can find tolerance and common ground, but also respect and admiration for the work of the other.

Does Reinhold Niebuhr have any relevance in 2017? Would he be America’s conscience today? Or for that matter, for Christians today? Seventh-day Adventists?

Niebuhr’s great contribution is to challenge us all by asking what it means to be an ethical person of faith given the realities of our circumstances. He calls us all to realize that the “evil in the foe” is so often the evil in the self. Too often we tend to ignore that, but we do so at great peril. And what Niebuhr says is true not only for individuals but nations as well.

In his own day Reinhold Niebuhr rose to near celebrity status, offering a corrective voice for what he identified as the volatile rhetoric of American Exceptionalism.

Instead, he called for a greater sense of humility, acceptance of our individual and social responsibilities, and a willingness to forego self-interest for the sake of justice. It is always risky to imagine what any character from the past, including Reinhold Niebuhr, would think of our own issues and times. Yet in Niebuhr’s case I can’t imagine him being silent in the face of our current realities.

Martin Doblmeier is the founder of Journey Films. Since 1984 he has produced and directed more than 30 films focused on religion, faith, and spirituality.

Jeffrey Gang, D.Min. is an assistant professor for Loma Linda University School of Religion. He is currently writing a dissertation on the ecclesiology of Dietrich Bonhoeffer.