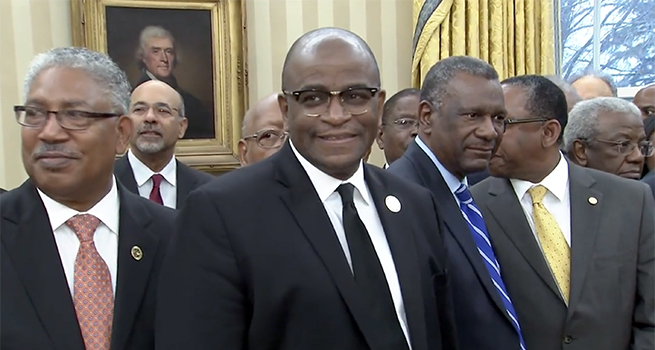 As Black History Month came to a close, the White House hosted a two-day “Listening Session” on February 27-28 with over 60 presidents and chancellors from HBCUs.

Pollard announced in his inaugural G1 (God First!) President’s Newsletter that he would take part in the meetings, stating the United Negro College Fund (UNCF) and other HBCU partner organizations had “provided input to White House staff on the top priorities for a new HBCU Executive Order, including a request to increase Pell grant funding.”

Though the official purpose of the listening session was to discuss the needs of HBCUs and for Trump to sign an executive order that would recognize their importance, the Washington Post reported that some of the HBCU presidents were suspicious this was a strategic initiative designed to bolster support among black Americans. Trump received only 8% of the black vote, while Clinton carried 88%.

Before the listening session began, the HBCU leaders were invited to the Oval Office to meet with President Trump and Secretary of Education, Betsy DeVos. Earlier in the month, DeVos chose Howard University, a historically black college, as her first official school visit after being sworn in as education secretary. In a statement released after the listening session, DeVos called HBCUs pioneers of school choice, but later backpedaled after receiving backlash that her choice of wording negated the necessity of black colleges and universities during the Jim Crow era.

Photos from the HBCU leaders’ visit to the Oval Office were circulated widely among media outlets, not because of the importance of the meetings but due to controversy over Kellyanne Conway, Counselor to the President. Conway’s position on the Oval Office sofa while snapping a photo raised eyebrows. Leslie Pollard is featured prominently in many of the photos. Screen capture from the New York Times. Pollard is directly in front of Conway, smiling as she snaps a photo.

Oakwood University posted a photo of the meeting on its official Facebook page. The photo garnered a mixed reaction from Oakwood alumni. Some felt Pollard’s presence equated to acceptance of President Trump, while others defended Pollard’s decision to attend in order to support the needs of HBCUs.

On the second day of meetings, February 28, Trump signed the expected executive order, which serves to, “increase the capacity of HBCUs to provide the highest-quality education to an increasing number of students.”

The HBCU presidents are calling for $25 billion to fund this initiative. The budget has not yet been determined.

HBCUs have been receiving bipartisan support for decades. In 1981, President Reagan signed the White House Initiative on Historically Black Colleges and Universities, which expanded the federal program President Jimmy Carter had signed into existence the previous year.

The Washington Post reported that, “Three-quarters of all doctorates awarded to black people, three-quarters of all black officers in the U.S. military and 80 percent of black federal judges got their undergraduate degree at such a school, according to the Education Department.”

Pollard took to Twitter on the first day of the listening session to echo the importance of HBCUs:

Today, in DC for the White House visit. HBCU's matter to the success of our nations under- and unemployment crisis. The statistics speak.

The HBCU output is a national gift. Today at WH we seek investment not charity. 3% of higher ed institutions produce 24% of all STEM grads.

At the conclusion of the two-day meeting, HBCU leaders expressed hesitant optimism. Walter Kimbrough, president of Dillard University in New Orleans, told NPR’s Ari Shapiro that, “…all the talk was good. There's some symbolism there. But I mean the jury's out. I'm waiting for the budget.”