The Whirlwinds of Revolt: #ItIsTimeAU 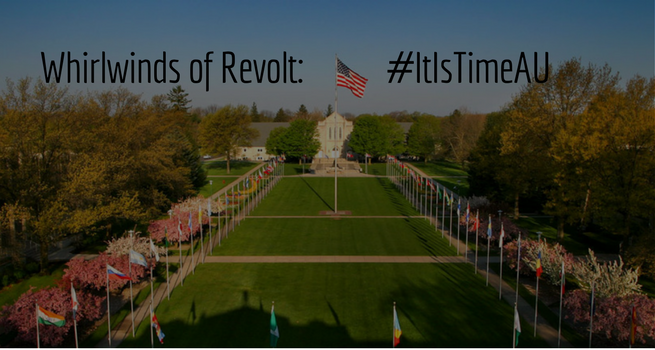 If you exist in a culture, you are subject to it. No exceptions.

On August 28, 1963, Dr. Martin Luther King, Jr. gave a speech that would go down in history as one of the greatest speeches of the 21st century. In it, he implored America to re-think the way it had treated African-Americans theretofore and plowed ahead using the language of unity and equality.

The most forgotten parts of that speech are the warnings.

Those who hope that the Negro needed to blow off steam and will now be content will have a rude awakening if the nation returns to business as usual."

As an alumnus of Andrews, I know a thing or two about “the bubble.” It can be difficult to remember while in that quiet town of Berrien Springs, Michigan, with its frigid winters and haystacks, that you are present inside of America. Most of the students and faculty are American, of course. And not much is done to puncture that sense of safety.

I wouldn’t even argue that that’s a bad thing. I spent the best years of my life at Andrews University, and part of that is due to the insular nature of the community. Regardless of the diversity of language, culture, and background that the students represent, we have the same rituals and customs, we eat (and complain about) the same food, and breathe the same foul, dairy air on particularly windy Thursdays.

This allows for a cohesive community and allows for students to focus on their work and purpose for being at an institution of higher learning in the first place: education. However, there is something being left out of the curriculum.

University of Texas vs. Fisher

In a Supreme Court case deciding on the constitutionality of the implementation of the University of Texas’ racially sensitive admissions process, Chief Justice Roberts asked simply: “What unique perspective does a minority student bring to a physics class?” Followed by: “I’m just wondering what the benefits of diversity are in that situation?”

As Jedidiah C. Isler writes in an op-ed for the New York Times:

The truly damaging part of Chief Justice Roberts’s question is the tacit implication that black students must justify their presence at all. Black students’ responsibility in the classroom is not to serve as ‘seasoning’ to the academic soup. They do not function primarily to enrich the learning experience of white students.

The #ItIsTimeAU video took the campus by storm, but should it have?

In this country where a Supreme Court justice either does not believe or does not know what value there is to having black students in the classroom?

In this country where those very same students are asked to justify their presence in a physics classroom?

In this country that remembers only the first four words of a 17-minute speech?

Is it surprising, then, the notion that black students may have grievances others are not privy to?

Surprising to white people, I suppose.

They dress the wound of my people as though it were not serious. 'Peace, peace,' they say, when there is no peace."  — Jeremiah 6:14

White America has swallowed a tranquilizing drug that says there can be peace without restitution, and amends without apology. Adventism has swallowed the tranquilizing drug of believing so much in being “a peculiar people” that some, judging from comments upset about the administration’s response to black student’s grievances, truly believe that you can have a campus divorced from culture. You cannot.

The Whirlwinds of Revolt

Underneath the administration response video, one commenter wrote, “I saw zero racism when I attended in the early 2000s. Considering AU is one of the most diverse campuses, I find this hard to believe. Pandering to the white guilt/privilege BS plaguing the country.”

1.    Seeing “zero racism” when attending Andrews in no way precludes there being…more than zero racism there.

Another commenter was “VERY disappointed” and believes that Andrews, with the response, “does not stand up for what it’s [sic] values truly believe in.” It is hard to understand what values this individual believes Andrews to be abandoning with its  empathetic response.

How are we supposed to hold conversation with such willfully shallow understandings of lessons that have already been taught?

And at a time when black Americans are told that it is disrespectful to take a knee, insulting to sing a protest anthem, or immoral to lob a molotov cocktail, we could simply ask of white America that they share with us their preferred form of dissent. We can now cross “making a video to address grievances” off the list of acceptable methods.

The race conversation will always come as a shock if it is relegated to the sidelines. If the carefully constructed bubbles of Adventism, Andrews University’s campus, and white identity are not punctured from time to time with reminders of the actual state of justice, calls for change will always be met with bewildered stares.

People will always cry, “But we’ve always had good race relations here!” if the nation has returned to business as usual, and views cry for comprehensive policy changes that benefits all, not simply some, of Andrews students, as an aberration or deviation from “the norm.” The whirlwinds of revolt will live on if underlying problems are not addressed or if black students are perennially met with an attitude of “*Sigh*, what do you want now?” or “When will you be satisfied?’”

For the record, as an alumnus of Andrews University, even as a black student, I can definitively say that in my day-to-day experience, I did not feel the weight of the issues mentioned in the video. That also does not cause me to believe that simply because I did not personally experience it that it did not happen or does not exist.

Perhaps that is a lesson that the community of Andrews can learn from.

Timothy Hucks is a blogger/author who graduated from Andrews University in 2014 with a Bachelor's of Art in English Literature.