An Open Letter to Adventists Who Voted for Trump

An Open Letter to Adventists Who Voted for Trump 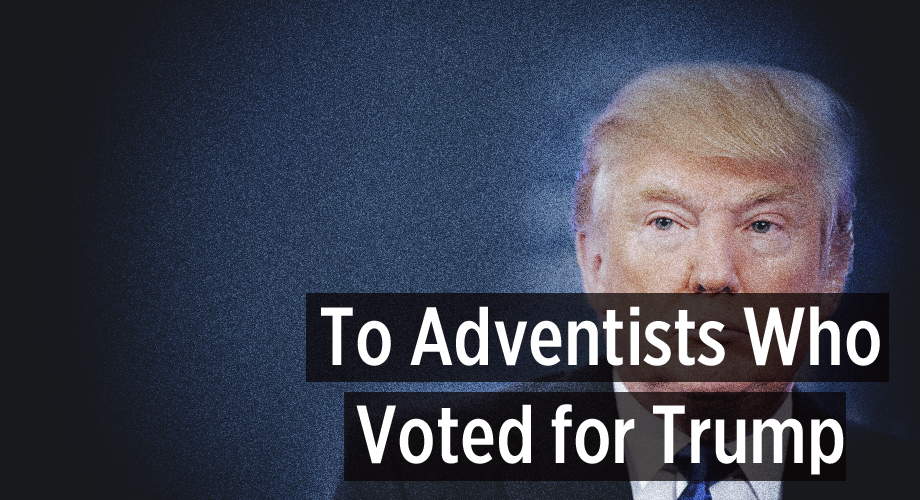 I know Donald Trump probably wasn't your first choice. Or your second or third. After voting, one of my friends wrote on Facebook: "I voted. Lord have mercy on my soul."

After Donald Trump became president, however, you might have been feeling optimistic. You might even have been pleased that some of the policies you disliked under the previous administration were being swiftly reversed. I get that, and while I would love to talk with you sometime about our differing political beliefs, now isn't that time.

I'm writing because the totality of what has happened during Donald Trump's first weeks in office is a pivot from traditional Republican principles and is contrary to our shared American values.

Is it too dramatic to say that I'm worried about the soul of our nation?

Since his inauguration, President Trump and his team have countered actual facts with "alternative facts," censored government offices, advised the free press "to keep its mouth shut," spoken positively about torture, and placed chief strategist Steve Bannon on the National Security Council. (Steve Bannon, of course, is the former chairman of Breitbart, an alt-right website.)

On International Holocaust Remembrance Day, the White House released an official statement about the holocaust that intentionally excluded the words "Jew" and "anti-Semitism." When Hope Hicks, the White House director of strategic communications, was asked whether the omission was to "avoid offending anyone," her sidestepping response was, "It was our honor to issue a statement in remembrance of this important day."

In my history classes at Southern Adventist University, I learned that those who start chipping away at history usually have an agenda. It doesn't feel like a coincidence that Steve Bannon has ties to the white nationalist movement.

Of course, International Holocaust Remembrance Day was also the day that Donald Trump issued an executive order banning the entry of citizens from seven Muslim majority nations. (As almost everyone has pointed out by now, not included in that ban are countries that do business with private citizen Trump.)

There was chaos at the airports this weekend as those with visas and green cards were often handcuffed, denied lawyers, and were either detained (at best) or placed on flights leaving the United States (at worst). Yemeni brothers Tareq Aqel Mohammed Aziz and Ammar Aqel Mohammed Aziz (just 19 and 21 years old) were handcuffed, forced to relinquish their U.S. green cards, and eventually sent to Ethiopia, where their Yemini passports were then also confiscated. They now wait, with nowhere to go and no documents.

When Donald Trump first spoke of a Muslim ban, the Interfaith Immigration Coalition wrote a letter that has now been signed by over 2,000 leaders of faith. The letter begins, "As religious leaders from a variety of backgrounds, we are called by our sacred texts and faith traditions to love our neighbor, accompany the vulnerable, and welcome the sojourner."

We Adventists are also called to love our neighbor and welcome the sojourner. In addition, we have a long history of advocating for religious freedom and tolerance. Now is the time for Adventists to be a clear voice opposing any attempt to use religion as a litmus test for entry into the United States.

Last week, as I read the news, I alternated between discouragement, shock, and anxiety. Eventually, I sat down to write. First, I wrote all my representatives. Then, I wrote the White House. Now, I'm writing to you. I'm writing this open letter because while we might have different political opinions, we share a common culture.

If you finished reading this letter and you're tempted to argue with me, please don't. Instead, reach out to one of your liberal friends. Let's eat some haystacks together and listen to each other's stories. If you come to my house, I promise to send you home with a bag of oranges.