Should I Stay Or Should I Go Now?

Should I Stay Or Should I Go Now? 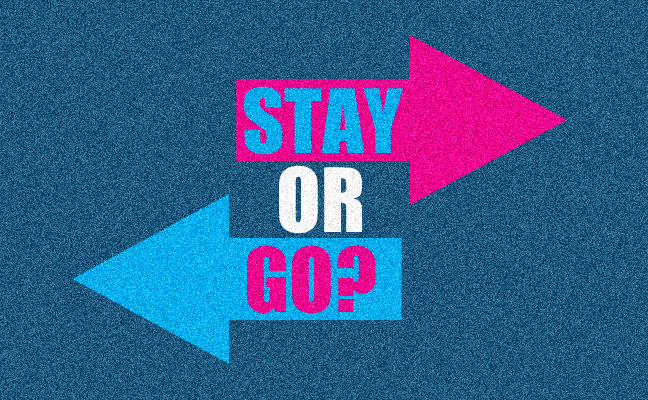 A record number of senior level U.S. State Department career staff are leaving. Additionally, nearly 1,000 employees in that department signed a memo through the department dissent channel. All of them expressed displeasure with recent actions by the current administration (for comparison, the previous record number for dissent signatories was around 50). In response, U.S. Press Secretary Sean Spicer commented that the employees should either “get with the program or go.”  It seems like the first group were of that mind;  whereas, the second group appears to have decided to stay and dissent from the inside. Who is right?  Throughout the government, employees who have dedicated their hearts and lives to their work are weighing these options. A recently aired interview with 2 Department of Energy employees talked through both choices. Each had decided to take a different tack. I could empathize with each rationale. Stay: Change will not happen if no one is “inside the system” to implement change. Go: Why frustrate yourself and why potentially compromise your values by working for an inept and wrongheaded regime?

I have been there. On a certain level, most Adventists who look at our unjust policies and the intractability of our organization have been there, too. But while citizens of the United States and around the world are frustrated by the new US President, that frustration pales in comparison to what is felt by those actually employed within the system. Similarly, the frustrations of church employees is sometimes magnitudes greater than those of the average member. I am sure of God’s calling as a minister. It has not always been clear whether or not it should be within the Adventist Church. Of course, the Church has a way of insinuating not only that working for the church is the only way to minister but also that doing anything else is tantamount to apostasy. Look at the treatment of Ron Gladden. But God is infinitely bigger than Adventism. And when decade after decade our administration continues to act in ways that seem incongruent to biblical principles, it becomes difficult to find peace remaining in the system. It is not merely about policies. It is about ego and nepotism. It is about ultra-sensitivity and vindictiveness for perceived slights. It is about lack of vision and arbitrariness. Shouldn't the description of leadership within God's church be distinguishable from the megalomaniacal leadership of a secular government? Due to these issues, pastoral colleagues around the world have testified about how much they have struggled with the choice of staying or not.

Several young pastors have decided they cannot reconcile their consciences with staying in the system. I am not talking about high profile departures like Ryan Bell or Kurtley Knight who have decided that they no longer believe the theological underpinnings of the church. I mean people who have no beef with Adventist beliefs per se yet choose to minister outside of the system -– like Eric Hatcher who founded The Life Church in Maryland.

Of course, there are those who choose to stay, those who mount internal resistance –- like all of the female pastors worldwide who diligently and faithfully work for God despite discouragement and recalcitrant administrators. There are those like Kymone Hinds, Furman Fordham III, and other male pastors around the world who gave up their ordination to stand in solidarity with their sisters. There are pastors who quietly work behind the scenes to influence the system for the better good every day.

Who is right? I cannot say. Each path has its merit. This is also true for members who contemplate their own future relationships with the denomination. But, either way you go, may God be with you.