The original plan was to get up early Saturday morning and get to the Prince George’s Plaza Metro station (on the Green Line) around 9:00 a.m. The rally for the Women’s March on Washington was supposed to start at 10:00 between 3rd and 4th streets on Independence Avenue, and the march was to begin at 1:15 and wind itself down the length of the Mall and then north to the White House. In the end, I didn’t get to the station until about 11.30, but I hoped that I’d get to the rally area in time to hear a few of the speeches or songs, and then join in for the march.

When the train came, it was about half full of men and women in pink hats –- knitted pink pussy hats, fuzzy pink headbands with glittery bobbles, pink foam Statue of Liberty crowns –- and one somewhat bemused man in a white hardhat. The mood was cheerful, and there was a lot of laughter. By the time we got into the city, the train was full. I’d planned to get off the Metro at L’Enfant Plaza as it was the closest I could get to the rally area near the Capitol building without changing trains, but as we approached the Galley Place stop in Chinatown, there was an announcement that the train would not be stopping at either the Archives stop or L’Enfant Plaza as they were so full of people it was unsafe. So, everyone trooped off the train at Gallery, out of the station on the corner of 7th and F Streets, and into a street party. We were four blocks north of the mall, and the streets in every direction were packed with women, men, young, old, children, pink hats, banners, and placards both strident and funny. 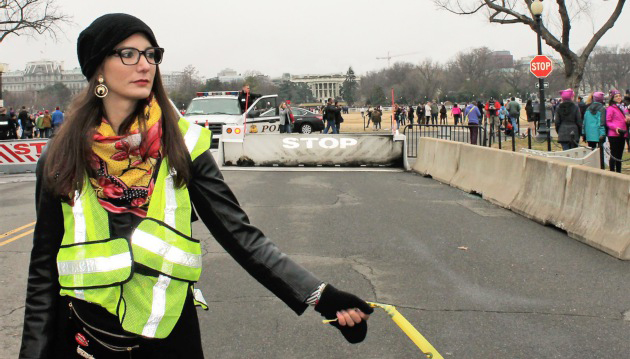 Traffic was blocked off, and people filled the streets and sidewalks. The flow of pedestrians was moving slowly south on 7th Street, so we followed it as far as Constitution Avenue which forms the northern edge of the Mall. At that point, the crowds going South just weren’t moving, so the procession turned and started following Constitution west. My phone was having trouble picking up a signal, but people in the crowd kept shouting out updates on the situation. There were a lot more people than the organizers had anticipated, and the streets surrounding the rally area were gridlocked. Latecomers were being routed around the area, directly toward the White House. None of us were in a hurry, and with so many people, we couldn’t have moved fast if we’d wanted, so we ambled westerly, slowing down at each intersection as more people joined the procession from all directions. 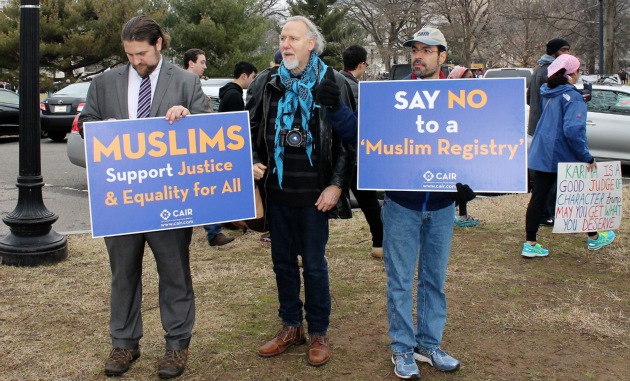 As we moved, small groups of people would start singing or chanting. Those near would take up the refrain, and the sound would move through the crowd. At various times, we were singing along to “America the Beautiful” or the “Star Spangled Banner” or “This Land Is Your Land,” at others shouting out very catchy (and occasionally raunchy) chants. My favorite was “We need a leader, not a creepy tweeter.” Every few minutes a howl would move up the street, like an audible Mexican wave, and I found myself whooping along with the crowd.

The atmosphere was odd -– jubilant, friendly, angry, polite. A friend described the L.A. March as feeling “like a gigantic support group for throngs of folks who have felt despair since election night,” and that’s exactly how the D.C. March felt to me. We were a gathering of elderly white couples, middle-aged black women, blond teenage girls, families with small children, every age, color, gender, ethnicity was represented. Although we were marching for many different reasons—many for reproductive rights or for black lives, others against a Muslim registry, still others for the rights of indigenous peoples or for the environment—we all had one common cause: to stand up for the vulnerable, the disenfranchised, the despised.

And by the time we reached the White House, streamed across the lawns, and shuffled along the path across the front of the building, it didn’t matter that the resident wasn’t there to watch us. The world was. 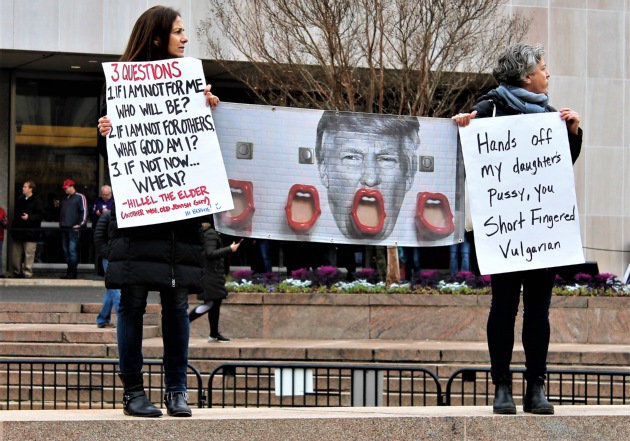