Obama, the Lamb: Why Obama Didn’t Do Anything about Trump

Obama, the Lamb: Why Obama Didn’t Do Anything about Trump 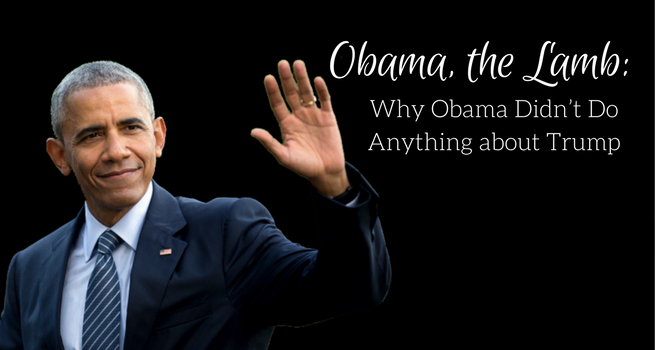 Recently, America elected Donald Trump. Objections to this have been duly noted.

As my friend David once told me, “Any situation or scenario in which Donald Trump is the president of the United States is likely to be complicated.”

However, one idea that some despondent liberals seem to have latched onto is, “Why didn’t Obama do anything?”

Think of humanity as an orb. All the fruits of the Spirit – love, joy, peace, patience, kindness, goodness, faithfulness, gentleness, and self-control –- all contained within an orb. This orb is distinct from the human beings that own it, and it can be relinquished and tossed aside at any time.

Some have their humanity in their hands, carrying it around so often it feels as natural to them as putting on glasses in the morning.

Some have it by their feet, not too far away. Others instead keep it in a shed in the backyard and can dig it out of their old belongings if need be. Others still have lost their orbs and can’t remember the last time they held them.

President Obama has what I consider to be a unique ability to find and restore the orbs of humanity to others. In many instances, he operates on a “good faith” model, assuming that his detractors intend good, mean well, and are, for all intents and purposes, his equals, even if that is manifestly not the case.

In instances where opponents such as Paul Ryan or Mitch McConnell will describe repealing The Affordable Care Act, his capstone achievement, with almost unrestrained glee, he treats them simply as actors on the other side of the aisle. When a Trump voter booed him as he campaigned for Hillary Clinton, he defended the heckler, saying that he was simply speaking his mind.

A Raisin in the Sun and Civil Resistance

One example that comes to mind is from the 1961 movie A Raisin in the Sun with Sidney Portier. In it, a black family receives a death check for the mother’s husband. With the hopes of the family pinned to this substantial sum of new money (the wife wanting a new home, the sister wanting an education, and Walter wanting a new life), the mother, the one with the sole authority to make this decision, gives it to Walter. Walter routinely wastes his money at the bar and then bemoans not having any. She explicitly asserts his role as patriarch of the family and says that he should decide how the money is used.

Walter promptly loses the money in a bad investment with shady actors. The act, however, still remains powerful.

What’s important to note is that neither the mother nor Obama is stupid. Neither is ignorant. Neither simply isn’t aware of the stakes. They do this precisely because they are informed to the highest degree about how to foster the best in people, and part of that is giving them the chance to disappoint you, sometimes on a grand scale. And on a pragmatic level, this approach works.

We have the data that shows us that violent resistances are less likely to succeed and sustain than peaceful ones. Whether it’s the Jallianwala Bagh Massacre, which some historians say led to the end of British Rule in India, or Bloody Sunday, a demonstration in Selma, Alabama that led almost directly to the Civil Rights Act of 1968, or the mainstreaming of TV that broadcast the brutalities of the Vietnam War and turned public opinion, we’re shown that people are not without compassion. People are not without shame. People are not without remorse.

You just have to give them their orb back.

According to the Pew Research Center, seventy percent of the people in the country I live in believe that’s an inspiring story.

At the very moment Jesus is betrayed, he highlights his uncompromised ability to use his awesome power and call down “legions of angels,” but he underscores his commitment to not doing so. “Do you think I cannot call on my Father, and he will at once put at my disposal more than twelve legions of angels? But how then would the Scriptures be fulfilled that say it must happen this way?” (Matthew 26:53)

When others provoke him on the cross and say, “He saved others but cannot save himself,” he prays for God’s forgiveness on their behalf. (Matthew 27:42)

And when the disciples mistake his purpose and ask him for the millionth time when he will ruthlessly expel the occupying Romans from their lands, it’s almost as if he is exasperated in telling them: “You don’t have any idea why I’m here, or what I’m about. But you will.” (Acts 1:6)

They wanted a lion. They got a lamb.

I’ve heard liberals sneer as Obama defended the notion of a “peaceful transition of power,” but I saw nothing more or less than an extension of his behavior as president: magnanimously and graciously giving way to even the most heinous of us, asking them to be better. Asking us to be better.

To ask the question: “Why didn’t Obama do anything?” is to ask why Obama was unable to save us from our vices, from our prejudices, and from the worst aspects that humanity can embody. That was never in his control. He could never save us from ourselves.

But in many aspects, and following the grand tradition of respected leaders like Ghandi, Martin Luther King, Jr., and the venerable Jesus Christ himself, Obama’s legacy might have been showing us how to save each other.

Timothy Hucks is a blogger/author who graduated from Andrews University in 2014 with both a Bachelor's of Art in English Literature.