Breaking Up Is Hard to Do: Our Love Affair with the RCC

Breaking Up Is Hard to Do: Our Love Affair with the RCC 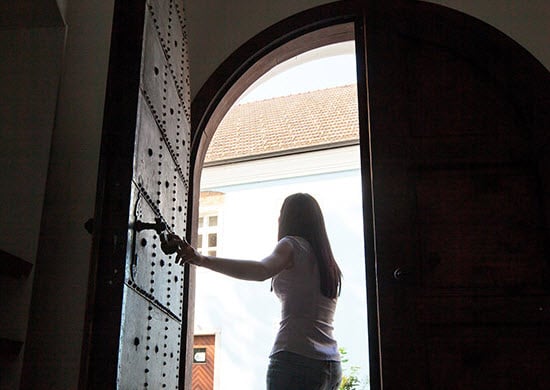 Go to any traditional Daniel and Revelation seminar, and you will hear about our Protestant departure from Babylon, (generally referring to the Roman Catholic Church). We make a significant effort to make sure attendees recognize how complete and distinct our ecclesiastical break was. The RCC’s theology caused Martin Luther’s departure, but we made ours even more complete by rejecting Catholic practices like infant baptism and, of course, the ever large, looming, adoption of Sunday as Sabbath.

But, just like someone who still keeps her ex’s sweater or longingly looks at old pictures of a bygone relationship, the Seventh-day Adventist Church is not as “over” the RCC as we want everyone to believe! For a large portion of our history, our evangelism seemed at times downright hostile toward Catholicism, emphasizing all the things the RCC did wrong. But, as they say, there is a thin line between love and hate. And we still have vestiges of our former relationship that we do not want to give up. All the while, we swear to others (and lie to ourselves) that we have nothing to do with the RCC.

1) Ordination: So here is the biggie. No matter how you slice it, the ordination service as we practice and regard it, is wholly an extra-biblical practice taken straight from the RCC. To be an ordained priest is to receive an imbued power transferred from none other than the first Pope: Simon Peter himself. His power, given from Jesus, established him as the founding rock of the church. By the laying on of hands and ritual, today's Pope has power vested in him that was passed down from Pontiff to Pontiff starting with Peter #1. But not only that: “lower ranking” bishops and cardinals and priests and deacons all receive their ordination and power, by being ordained by members of the next “level up.” Therefore, they too get their power from Peter, (but in smaller doses?). This is why it is extremely important to guard the clergy class—it is an exclusive club. Only certain people are allowed.

While Adventists claim to believe in the priesthood of all believers and the mediation by Christ alone, we absolutely divide our church into clergy vs laity. And the clergy is a protected class whose “power” comes from a level up and is transferred by those previously ordained, by laying hands on the new initiates. There are all sorts of issues with this theologically. Many, many papers have been written explaining how and why this simply is not biblical, yet we have people fighting to the death and splitting the church over something we do not want to admit is a straight rip off from Catholicism.

Now not everything extra-biblical is un-biblical. You will not find Pathfinders or quarterlies discussed in the Bible. That does not make them “bad” (although the history of Pathfinders demonstrates how the idea that extra-biblical = unbiblical nearly did kill it before it gained traction). But we have to be clear why we do things and be honest about their origins. Every year, at my Adventist school, we heard the origins of Halloween read to us from the encyclopedia – to ingrain in us the roots of this practice. Even this year I was “treated” to countless expositions on the pagan roots of Christmas traditions. I will not go on that tangent for this article – but suffice it to say, Adventists know how to acknowledge the significance of origins for many practices we want to discourage, yet we are reluctant to talk about origins with things we hold dear. This is deceptive. We allow people to believe that the history and procedures we follow come straight from the Bible. Therefore, people defend these things as if they are defending Scripture. They falsely believe changing these practices is as blasphemous as attempting to change God’s Word. We misrepresent these traditions as being from God, and if that is not the way of Babylon, I do not know what is.

2) Tithe: Based on Malachi, we bring tithe into the “storehouse.” Yet who decides that the storehouse = the conference? I am not saying that tithe absolutely shouldn't go to the conference, but we should not pretend that other options (such as giving to your local church) are illegitimate from a biblical standpoint. Our hierarchical institutional structure simply did not exist during the time Scripture was written. Yet when we incorporated, we added layers of organization that resemble the stacks of bureaucracy that the RCC has. And our house of cards is not self sustaining. We have to maintain it through benevolent giving. Now this is not automatically a bad thing. However, we often attach a spiritual threat to the plea for finances. Indulgences were a great model that worked for the RCC to line its coffers.  Why not tweak the pitch a bit for our own purposes, no? Truth be told, while God asks for stewardship, the belief that our tithe checks have to be written to the local conference (lest ye be cursed) is not supported by the Word. If we want giving to support our current structure, fine. But let us be honest about it. And let us not act like talk of restructuring is equivalent to talk of apostasy.

3) Communion: Catholics believe in transubstantiation while we do not. Or don't we? In a Catholic mass, preceding the Eucharist, the priest blesses the wine and bread. According to Catholic belief, these elements become the literal blood and flesh of Christ. You want to talk about a “plain reading of the Word”? The RCC takes Matthew 26:26-28 as no joke! Adventists, of course, do not believe in such spiritual cannibalism! We obviously know they are just symbols!

Oh yeah? Have you ever tried to get any leftover juice after communion? In many churches deaconesses will guard it feverishly, preferring instead to pour it on the ground which is practice per SDA tradition. They are also instructed to burn or bury the leftover communion bread. (Depending on the person making it that time, this may be more or less of a tragedy.) Why this colossal waste of perfectly edible crackers and juice? Well, despite claiming we do not believe that these things are literally components of Jesus, most churches have a blessing before communion, asking God to “change these elements from their common use to their holy use” or similar wording. A small distinction from the priest petitioning for a substantive change -– this is supposedly symbolic. But regardless of whether or not we claim to understand that these things are only emblems, we literally treat them as sacred objects to the extent that gallons of Welch's are wasted every quarter in our churches around the world. Sadness.

This list could be even longer, but I will stop here. If you are making resolutions this year, ask our church to make one, too: to practice honesty and encourage people to know the Word for themselves. Let's not call out the practices of other institutions yet obscure the line between Scripture and tradition when it suits our purposes. Let's get the plank out of our own eyes first. And then maybe we can make a true break from our “ex.”