“Every Improvement, Every Graduation, Every Baptism Is a Success”

“Every Improvement, Every Graduation, Every Baptism Is a Success” 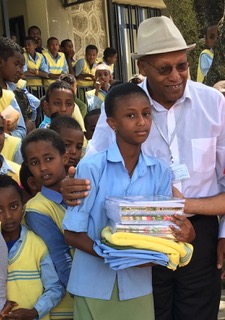 Fekede Gemechu, the man behind Ethiopia's Kalala Learning Village, talks about how the school and clinic started in 1996 and the thousands of students and community members who have been served by the social business.

Question: How did the Kalala Learning Village in Ethiopia begin?

Answer: During the late 1970s and 1980s, Ethiopia went through a long period of civil war. I was in medical school and postgraduate programs in the United States during those decades. The war ended, and a new government came into power in 1991.

Shortly after that, I returned to Ethiopia to see what I could do to fulfil my promise to the two missionary doctors, Carl J. Houmann and Robert G. Rigsby (both Loma Linda University School of Medicine 1954), who sponsored my education in the United States. My plan was to work at the Empress Zewditu Adventist Hospital in Addis Ababa where Drs. Houmann and Rigsby expected me to serve.

But I found out that the hospital had been taken over by the government. For several years, our appeal to the authorities to return the hospital to the Seventh-day Adventist Church was denied. I was also dismayed to see the post-civil war devastation, poverty, and starvation throughout the country. It was very discouraging.

However my late wife, Azeb, suggested that we make education, rather than health service, our mission. Because of the long civil war, the country was paralyzed in severe poverty. We felt that the first important step toward poverty reduction is education. In addition, I felt that I was still obligated to the promise that I made to my sponsors to “give back” in some way.

We found a community of farm workers to the east of Addis Ababa who were very eager to have a school in their area.

Thus, on a small hill called Kalala, we started a two-room school and called it the Kalala Learning Village. The primary school was officially named “Shibu Ejersa,” after the first farmer/settler at Kalala and the ancestor of most of the people in the vicinity. Because of that name, the community identified with the school and became very supportive of our programs.

When did the school open?

How is the school different than other local schools?

The Kalala Learning Village is not just a set of classrooms. We wanted to develop a community resource center where children and adults come to discover their natural talents and free themselves from the bondage of diseases and harmful cultural traditions.

The school was opened to both children and young adults. At first, girls were restricted from coming to school because the parents felt that the girls would be more useful on the farm. Forced early marriage was common. But after we held a series of meetings with the leaders of the community, the girls were allowed to go to school.

Local authorities who attended the community meetings told the parents that they would go to jail if they forced a child into early marriage.

In addition to basic education, we tried to bring together many key components of community development: infrastructure improvement (clean water, electricity, roads for children to come to school), physical and spiritual health promotion, skill enhancement, and social capital enrichment.

The core mission of the Kalala Learning Village was (and is) to build a productive and healthy future for every person in our community.

Do children board there, or are there only day students?

The Kalala Learning Village is not a boarding school, but we have allowed 12 to 15 children to live on campus. These were not orphans, but the parents left most of them in our care because they could not care for them or educate them.

How many teachers are there?

Since we have approximately 1,000 students in kindergarten through ninth grade, our school staff, which includes, administrators, teachers, supervisors and other support staff add up to about 80 employees.

Are they local or do they come from the US or other places?

All members of our school staff are local. We have had some student missionaries from the United States and Europe who stayed and worked (volunteered) with us for several months at a time.

How many children have graduated from the Kalala Learning Village school? What have they gone on to do?

Thirty-five to 40 students graduate from the eighth grade every year.  Several hundred (perhaps as many as 500) have gone on to government high schools and colleges. Many are working for various companies and organizations in Addis Ababa.

The children who grew up on the Kalala campus have proven to be excellent students. Some are pursuing careers in engineering, veterinary medicine, agriculture, and accounting. Two are on track to go to a medical school.

This year, we started the Kalala high school. We have named it the Kalala Academy of Science and Technology because we chose to emphasize science, mathematics, English, and computer technology. There are 52 students in the ninth grade. All of them graduated from eighth grade having successfully passed the State examination with scores in the upper 90 percentiles.

And how many people does the health clinic serve?

The clinic, which we refer to as the Summit Medium Clinic, provides basic health care, i.e., some aspects of family medicine, pediatrics, and obstetrics. The clinic is run by local nurses. We have a midwife who manages uncomplicated pregnancies and deliveries. We have a small laboratory, an ultrasound and EKG machines. We do family planning counseling, testing and counseling for HIV, a once-a-week free clinic for patients with diabetes and hypertension. There is an adjacent drugstore.

Most of the people in the vicinity are poor and are not accustomed to seeking health care. We see about 3,000 to 3,600 patients a year. When we get a visit from medical mission groups, such as those from Florida Hospital, which often happens twice a year, we see more patients in one week than we regularly do in three months.

How is the Kalala Learning Village funded? Is it partly administered from the U.S.?

We raise funds through a 501c3 charity, the International Medical and Academic Alliance, that we established in the United States at about the same time as we started the Learning Village.

We are an independent ministry, not a church-owned Seventh-day Adventist institution. We do work closely with the local Adventist church and other organizations such as the United Way Kaiser Permanente Employees, the Pathfinders group in Germany, a Baptist group from Oklahoma, and so on.

We receive our largest financial support for the clinic from the Florida Hospital Global Mission Initiatives, based in Orlando. We are one of many “FOOTPRINT Projects” that Florida Hospital serves around the world. Lars Houmann, chief operating officer of Adventist Health System, who was actually born in Ethiopia, and whose father, Dr. Carl Houmann, sponsored my education in the United States, is the executive sponsor of the health services at the Kalala Learning Village. In terms of administration, we have an onsite Administration and Finance Committee that manages the day-to-day activities of the Kalala Learning Village.

The Kalala Learning Village has industries where students can work. How successful have the industries been?

From the very beginning, we wanted to develop micro-industries, like the early Adventist school in the United States had, as a way of giving the students the chance to earn their tuition, to provide jobs for parents of some children — and more importantly, to give our on-campus resident students something to do.

We have a small dairy, grinding mill, sewing business, beekeeping, small-scale poultry, sheep rearing, etc. The dairy and grinding mill are doing well, but the others need more encouragement. We are now expanding our poultry, upgrading our café’ and bakery. Our kids who grew up on campus are now old enough to manage these school-based micro-industries by themselves.

Can you tell us about your background?

I was born in the western part of Ethiopia in a town called Gimbie, very close to an Adventist mission school and hospital. I had most of my early education in Adventist schools. After high school, Dr. Houmann and Dr. Rigsby sponsored me to come to Walla Walla College.

I graduated from Walla Walla in 1966, and went on to Loma Linda University to become a physician and then University of Maryland for surgical training. Because of the ongoing civil war in Ethiopia, I had to change my plan about working in Ethiopia. I joined the Southern California Permanente Surgical Group where I worked for many years.

I believe you were honured as Walla Walla's alumnus of the year last year, particularly for your work on this project in Ethiopia.

Do you believe your Learning Village model could be replicated other places?

I think it is reproducible, particularly our emphasis on “L-E-A-R-N ing:

What have been the biggest difficulties the project has faced?

The need is sometimes overwhelming; it is difficult to know where to put your limited resources. How do you make the project self-sufficient and self-sustaining so that you don’t continue to depend on outside help?

Success is the gleaming eyes of every child who comes to school every day. Success is the smiling face of a new mother who takes her newborn home after an uneventful delivery. For us, there is no big or small success; every improvement, every graduation, every baptism is a success.

Where do you see the Kalala Learning Village heading in the next few years?

We actually have big dreams. Our long-term goal is to merge our education and health programs into a training institution in the field of Health Sciences.  Ethiopia is badly in need of well trained allied health professionals: nurses, laboratory, sonography and radiology technicians.

In five or six years, we envision a college of Health Sciences right next to a multi-specialty surgical hospital.

In our succession planning, we envision the time when our boys and girls who grew up on campus and some of our alumni will return to Kalala to become leaders and managers of the Kalala Learning Village.

Photo: Fekede Gemechu with a Kalala student who, as part of a six-student team, won first prize in a science, arts, and craft competition of 120 schools.