People of Peace in a World that Wants Us to Fight 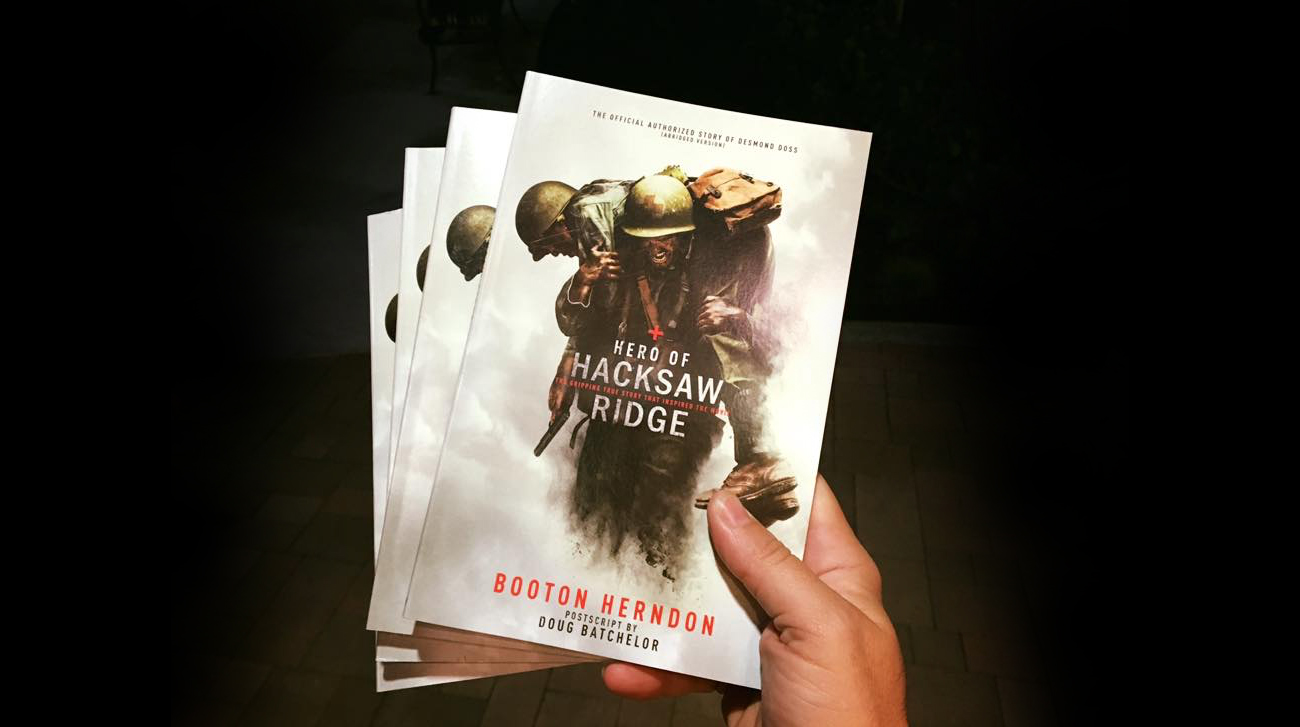 My three-year-old son found the first booklet on a bench outside our local theater. Then, excitedly, he discovered another one on the next bench over. He kept going. On each bench at our shopping center, someone had dropped paperback copies of “The Hero of Hacksaw Ridge” by Booton Herndon, postscript by Doug Batchelor. It was opening night of Mel Gibson’s biopic Hacksaw Ridge, featuring Adventist non-combatant Desmond Doss.

Seventh-day Adventists have pumped a lot of resources into publicizing the film in hopes that it will be a boon for Adventism. And in some cases, it has generated conversation about the Adventist Church. People are talking about Adventism because Adventists have seized the moment Mel Gibson’s war epic has provided.

I have my doubts that the film itself will persuade many people outside of Adventism to give the denomination much thought, in part because the very stance that allowed Doss’s heroism—Adventism’s official position of non-combatancy—is a thing of the past (see Jeff Gang’s great overview of Adventism’s shifting position on military participation) and in part because whatever biases and values people bring to the film will be validated watching Hacksaw Ridge.

Those who value Adventist conscientious objection in wartime will be encouraged by Doss’s refusal to even pick up a gun. Those who like to see the little guy “stick it to the man” will appreciate Doss’s triumph in a court martial hearing. Those who consider warriors to be heroes who defend our liberties will be gratified by slo-mo sequences of Doss’s platoon charging courageously toward Japanese soldiers and finally overtaking them. People who love stories of the triumph of faith in adversity will feel vindicated when Doss’s whole platoon waits for Doss to finish his Sabbath devotional before they finally capture Hacksaw Ridge.

I saw the film with a group of Seventh-day Adventist church leaders on Saturday night of the North American Division Year-end Meeting. The division’s communication department arranged a special screening at the Beltsville Adventist School before the film’s official opening in cinemas. When, in a lull in the fighting, Doss refused a ration from his foxhole companion saying “No thanks; I don’t eat meat,” the group of Adventist administrators, pastors, and their families cheered loudly. During an implied love scene between Doss and his wife, an awkward murmur rippled through the audience. Many covered their eyes and ears during the agonizingly long, intense battle sequences (for those who haven’t yet seen the film, it makes Saving Private Ryan seem comparatively mild). When his comrades retrieved Doss’s lost Bible—a gift from his wife—from the battlefield where he dropped it, those sitting around me cheered again.

[End spoilers, or whatever.]

My experience of watching Hacksaw Ridge was that rather than challenging people’s beliefs about war or faith or Adventism or anything else, the film seemed to validate the predilections people brought with them. That’s why I doubt it will lead to many Adventist converts. It’s not about changing minds.

However, seeing the film in the middle of an intense week of meetings that focused in large part on Adventism’s growing tension over ordination, followed closely by the tense divisiveness of the United States presidential election and its fallout, I began to think differently about Hacksaw Ridge’s value for this moment.

During what I felt was the film’s pivotal sequence, Doss in basic training refuses to pick up a gun. (The film recalls a somewhat embellished moment in his younger days when his alcoholic father in a fit of rage threatened violence with a gun. Doss vows never to use a gun for any reason.) Doss’s commanding officers and his fellow enlisted men deride him and abuse him mercilessly for refusing to use a weapon. “Just pick up the gun” they scream at him thrusting weapons at him.

Doss’s refusal is not only vindicated by the Constitution (Adventists loved this) but also by his ability to save lives as a result. In one of the gruesome battle scenes, Doss attends to broken body after broken body, pulling them out of the war zone and lowering them over an escarpment to safety. “Please Lord, help me get one more. One more!” Doss prays into the smoky air before rushing back into the firefight (Adventists really loved this). Because of his refusal to even touch a weapon to kill, Doss effectively spent his time on the front lines saving lives—an estimated 75 fallen soldiers. To each one, he spoke words of comfort and hope: “I’m here.” “You’re going to be OK.” “I’m not going to let you die.” “You’re going to see your family again.”

I’m reminded of the battle lines drawn in the Adventist Church over ordination: “Just pick up the gun!” I’m also reminded of the bitter partisan divide on the American political landscape right now, mirrored in countries around the world: “Pick. Up. The. Gun!”

I’m mindful of the devastation of war, too. In the Adventist Church’s fighting, people are being asked to surrender the dictates of their consciences. Spirits are broken and souls are beaten down and bloodied from years of relentless firefights. For Adventist women pastors especially, the warring has been deeply damaging. In this country and in many others right now, people are being subjected to ugly, hateful political warfare as well: burning effigies, Nazi salutes, screaming crowds, racist taunts, torched and graffiti-covered places of worship. For minorities—ethnic and religious—the fights have been particularly destructive.

In this world that wants us to fight, that screams at us to pick up weapons and calls us cowards if we don’t, the witness of Desmond Doss towers over our battlefields.

Is there a place for a People of Peace? Is there room for people who will not only lay down their arms but who also will refuse to ever pick them up in the first place?

For better or worse, Desmond Doss was persuaded of the rightness of the war effort. He enlisted because he believed it was the moral thing to do. He was a non-combatant, not a pacifist. Likewise, following conscience may mean being drawn into the struggles of our time rather than simply remaining civilians. But then what?

[Cut to Paul, addressing the Church in Rome, reiterating Jesus]

“Bless those who persecute you. Bless and do not curse. Rejoice with those who celebrate; weep with those who mourn. Live in harmony with one another. Do not be proud, but enjoy the company of the lowly. Do not be conceited. Do not repay anyone evil for evil. Carefully consider what is right in the eyes of everybody. If it is possible on your part, live peaceably with everyone. Do not avenge yourselves, beloved, but leave room for God’s wrath. For it is written: “Vengeance is Mine, I will repay, says the Lord.” On the contrary, “If your enemy is hungry, feed him; if he is thirsty, give him a drink. For in so doing, you will heap burning coals on his head.” Do not be overcome by evil, but overcome evil with good” (Romans 12:14-21).

Perhaps this moment in history calls us, both in the church and in our nations, to remember our place as faithful non-combatants. People of Peace in a world that wants us to fight. I can imagine that posture, if we were to adopt it, might cause people to give Adventism some thought once again.