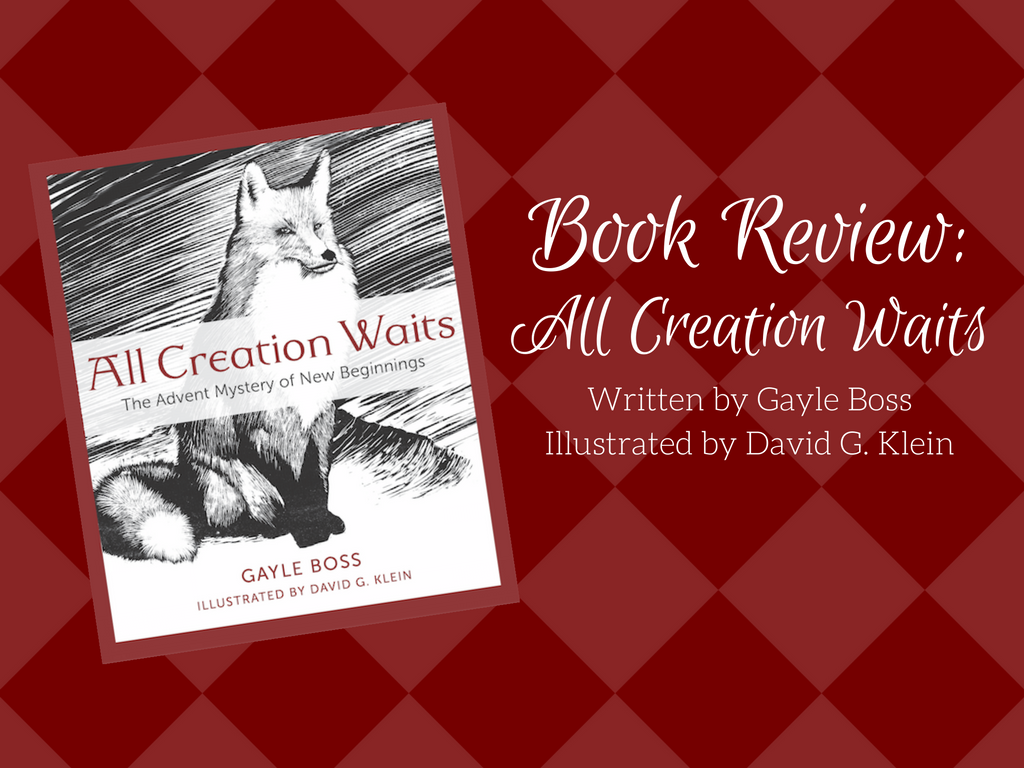 The season of Advent begins tomorrow, November 27, 2016. Amidst the hustle and bustle that accompanies the winter holidays, Advent symbolizes a time of patient anticipation and quiet preparation for the celebration of Jesus’ birth.

Turning one’s attention from the next great sale of the season to reflect on the reason for the season can often feel downright impossible when our senses are constantly assailed with the lights, sounds, and smells associated with Christmastime. Indeed, even many Advent books and calendars nowadays embrace the noise, rather than offering a peaceful reprieve from it. Cartoonish characters, sticker sets, and chocolate goodies hidden in little windows are all used to “teach” children about the importance of the days of Advent, and yet it seems these well-intentioned, but gimmicky, items miss the mark more often than not.

I was, therefore, intrigued to discover a new Advent title out this season, written by Gayle Boss and illustrated by David G. Klein. All Creation Waits: The Advent Mystery of New Beginnings immediately caught my attention with its simple yet intricately detailed black-and-white cover art: a fox sits, tail wrapped forward around its body, narrow face alert and solemn.

“Alert and solemn” turns out to be an apt description for the words contained within as well. Guided by Boss’ elegant prose and Klein’s engaging monochromatic woodcut illustrations, the reader encounters animals who must adapt to survive the descending darkness and chill of winter. Boss adeptly unearths the eternal truths of nature, revealing the wisdom of Advent along the way.

In the introduction to All Creation Waits, Boss explains her own journey toward a more simple celebration of Advent and the entirety of Christmas. It was while reading a book about the history of Christian liturgy that Boss discovered that “the roots of Advent run deep beneath the Christian church – in the earth and its seasons.” She goes on to say,

Late autumn, in the northern hemisphere, brings the end of the growing season. When early agricultural peoples had harvested their crops and stacked food in their larders, they gave a collective sigh of relief. Their long days in the fields were over. For their labor they had heaps of fruits, vegetables, grains, and meat. The group body called out, Feast!

At the same time, no matter how glad the party, they couldn’t keep from glancing at the sky. Their growing season was over because the sun had retreated too far south to keep the crops alive. Each day throughout the fall they watched the light dwindle, felt the warmth weaken. It made them anxious, edgy…Throughout December, as the sun sank and sank to its lowest point on their horizon, they felt the shadow of primal fear—fear for survival—crouching over them. They were feasting, and they were fearful, both. Yes, last year the sun had returned to their sky. But what if, this year, it didn’t? Despite their collective memory, people wedded, bodily, to the earth couldn’t help asking the question. Their bodies, in the present tense, asked the question.

The Church fathers envisioned Advent as “moving in step with Creation” (xii). The waning light and withering plant life served as a yearly reminder of a time when the Earth itself and the life it contains will end completely, giving way to an adventus: a coming of the Lord.

When Boss was pregnant with her second child, she sought to create an Advent calendar that would not just tell the story of Christ’s birth but also would tell of creation’s need for that birth to her children. “I wanted my little boy…to sense that Advent is about darkness—and hope, fear—and hope, loss—and hope” (xii).

She began more than 20 Advents ago with the story of a turtle who was soon joined by a diamond-skinned snake, a loon, a wild goose. All Creation Waits is the assembly of these stories that tell of each animal’s response to this season of change, of ends and beginnings, of survival and salvation.

We meet creatures native to the northern hemisphere: muskrat, black bear, whitetail deer, honey bee, chipmunk, wood frog, brown bat, wild turkey, garter snake, and many more. From insects, to birds, to mammals large and small, we journey through their natural habitats from a mud-caked lake bottom to the jagged rocks of a cavern ceiling.

On Day 25, we are introduced to Jesus the Christ’s own story of birth and survival. Boss writes,

In the fullness of time, the Christmas story says, a girl gave birth ringed by animals. She lay the baby in one of their feeding troughs, where animal bodies would warm the air around his fresh-born human body. Mother and child fell asleep and woke to their chuffs and shuffling hooves, their calls and the shuddering of their hides. Later sheep herders smelling of dirt, damp wool, and milk crowded into the stable. Out in the wild night fields these animal men sitting in the dark were the first to get the word. A baby had been born, they were told, who would show people a way out of their small pinched lives, a way to abandon themselves to the ever-present, unstoppable current of Love that carries all things to radiant wholeness. To recognize him they should look for a child at home among animals (74)."

And so it is with the animals Boss’ envisioned for her own young sons. These animals, these integral creations, with faces alert and solemn, look toward the story of Jesus, pointing us home.

All Creation Waits was published on November 1, 2016 by Paraclete Press and is available on its website at www.paracletepress.com and from various book sellers including Amazon.