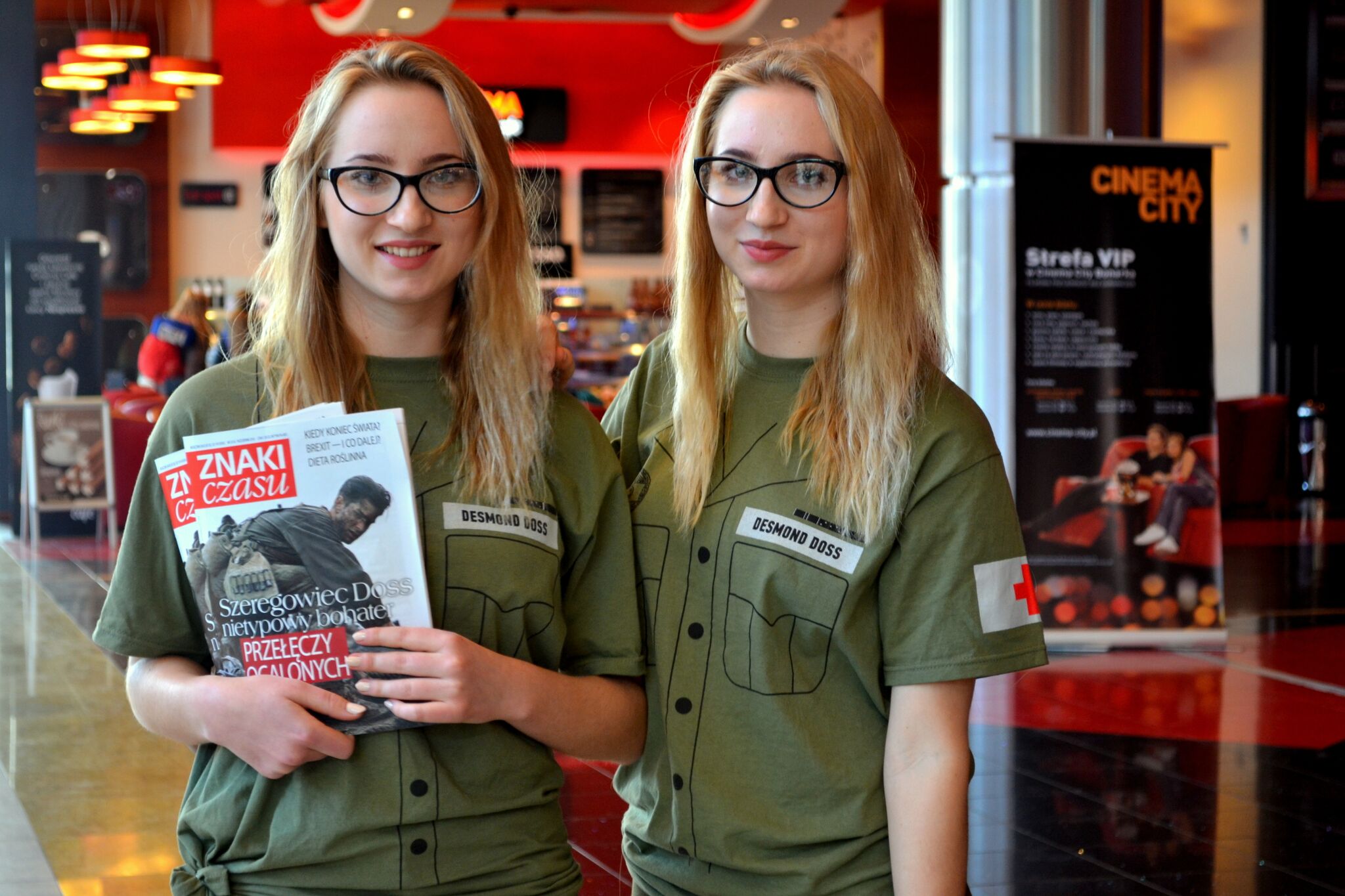 Karolina and Monika, from Krakow, Poland, have spent a lot of time this last month at their local cinema.  Recently baptised teenage twins, you will find them there, dressed in World-War II look-alike T-shirts similar to the uniform Desmond Doss would have worn.  On the back is written, “Desmond Doss saved 75. Jesus saved all. I’m an Adventist like Desmond Doss – ask me more.”

When they stand up at the end of a screening of Mel Gibson's WWII epic, Hacksaw Ridge, they make an impression.  They answer questions and share with moviegoers a specially prepared issue of the Polish Signs of the Times (Znaki Czasu).

They are not alone. Over 100 Adventist youth in cities across Poland have spent the month of November volunteering at cinemas, on the street, at a book fair, and at special screenings of the Desmond Doss documentary film, The Conscientious Objector in their local churches.

The result? People are already having Bible studies with pastors after watching Gibson’s film, and at least 100 have attended an Adventist Church for the first time.

All this did not happen by accident.  Marek Micyk, Youth director for the Adventist Church in Poland, joined with PR consultant Michal Rakowski and a group of youth to formulate a plan that could maximise the witness of the church during the time of the cinema release.

It was not just the youth. The entire Polish Union Executive Committee bought into the vision.  The publishing house printed 30,000 copies of a magazine that normally has a circulation of 3,000.  They have all sold. 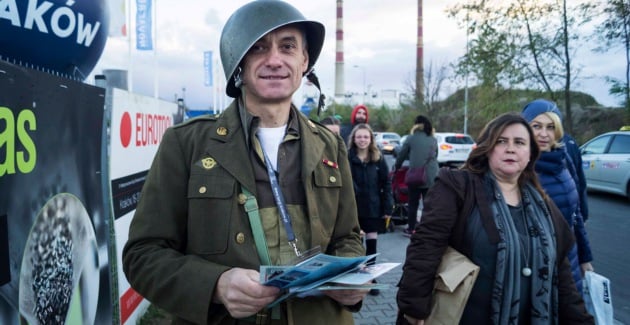 An Adventist volunteer at the International Book Fair in Krakow, visited by 70,000 book-lovers.

Hope Channel Poland gained permission to voice over and distribute Terry Benedict’s 2004 documentary The Conscientious Objector.  Screenings were organised in five cities and 1,000 DVDs were sold.

Szeregowiec Doss, a book about the life of Doss, a printed preparation for the film release, was given as a gift to journalists during the Polish premiere. Another 3,200 copies have been sold since, including at the Krakow International Book Fair visited by 70,000 people.  Znaki Czasu hosted a stand there for the first time in their history. Karolina and Monika were among the volunteers, wearing the same original American U.S. military uniforms that Doss would have worn.

Young Adventists in Krakow and Lublin give out “Signs of Times” magazines, leaflets about Desmond Doss and invitations for the screenings of Terry Benedict documentary film.

“It’s fantastic,” states pastor Marek Rakowski, Executive Secretary of the Adventist Church in Poland. “A strange paradox is that in a country that is one of the most Catholic in Europe, to talk about spirituality and other religions is generally ‘taboo.'  This film has broken the taboo and given the church a voice.”

That "voice" has come at higher levels than expected both in Poland and in near-by Hungary. In both countries, the film distributor contacted the Adventist Church asking for help to check the accuracy of the translation.

Róbert Csizmadia, Executive Secretary of the Adventist Church in Hungary, states that this was an answer to prayer as they had been looking for ways to be able to use the film as a witness. “There is so much war, enmity, terrorism, and people genuinely thirst for peace and love,” he said. “We have something positive to offer.”

Not only were they able to help with accurate translation and understanding of theological concepts such as the Sabbath, but the Church in Hungary has been offered a 15-second "media partner" spot before the showing of the film in every cinema in the country, plus an option of an Adventist web address on every poster.

Church leaders will also be present at two special Press and VIP screenings before the Hungarian release date of 29 December.  These will both include discussion time where the Adventist representatives will be able to talk about issues of religious freedom and tolerance.

“This is all at their cost,” Csizmadia states, “leaving us free to spend our resources translating and printing the It Is Written booklet, The Faith of Desmond Doss, Doss’ biography, the UK produced FOCUS magazine and to prepare programs that will run in local churches, including showing Benedict’s 2004 documentary and running violence-prevention day and associated programs.

The same is true in Poland where Hacksaw Ridge is already on release.  “In my entire life as a Seventh-day Adventist I have never seen our church gain such good media coverage,” says Marek Rakowski, the Secretary of the Adventist Church in Poland.

During a special pre-screening in Poland designed just for press, YouTubers and other influencers, Adventist spokesman Pastor Andrzej Siciński joined two other specialists (a retired elite counter-terrorism unit commander and a Catholic priest) who reflected on the film during a discussion panel.

Adventists also manned a booth during the press screening, handing out specially labelled USB memory sticks crammed with useful media materials about Doss and Adventists. That resulted in Siciński being invited to several other media outlets. One film critic talked about Frances M. Doss’s book in his YouTube clip.

USB sticks were labelled and filled with ready-to-use press releases and information about the Adventist Church.

Working in PR, Michal Rakowski is impressed.  “If the Church had paid for an advertising campaign of this kind of extent, using the same media, we estimate it would cost 180,700 Euros!  That is a price that is totally unaffordable for Adventists in Poland where there are just 5,820 members in a population of 38.5 million."  Rakowski concludes, “This was pretty spectacular - especially the amount and the fact that we did it for free!”

For Micyk, an active presence on the Internet was a key factor to success. His team translated the Polish Doss Wikipedia page. It was viewed 33,000 times in November, the third highest Wikipedia result globally – just after English and French. The team designed a church-owned website, www.DesmondDoss.pl. It was viewed 35,000 times by 8,500 users.  Micyk is most proud of the Desmond Doss PL Facebook fan-page where the most popular infographic was seen by 209,000 users, others by 140 and 120 thousand, he says. Many Polish Adventist youth changed their Facebook cover pictures for film poster images and a sentence “I’m an Adventist like Desmond Doss.”

Karolina and Monika, along with the other youth, are excited to see their witness making a difference – on the street, on social media, and at associated events such as ‘runmageddon’ where one of the events was to carry a bag in the same way that Doss carried his fellow-soldiers.

“The movie was great, but above all, we admire Doss’s moral rigidity. We are proud to be Adventists,” the twins admit.

Poland has done it. For Hungary the deadline looms. “We are actually a bit overtaken by this opportunity,” Csizmadia says.  “It is now giving us much more work than we expected, but it is worth it. We are genuinely surprised by God!”

Victor Hulbert is director of Trans-European Division News where this story was first published. Michal Rakowski and Robert Csizmadia contributed to this report.