The Tears on God's Face

The Tears on God's Face 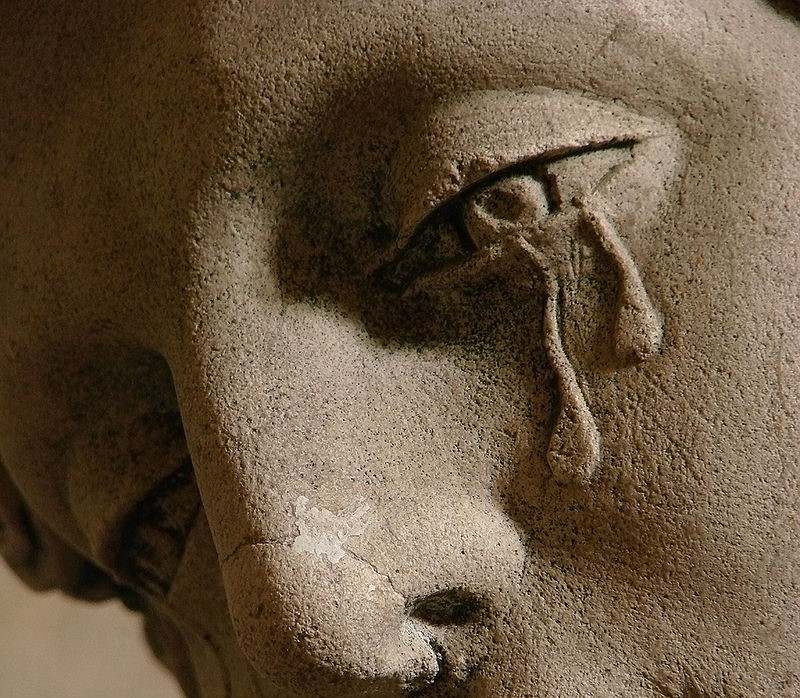 The book of Job had never triggered this question for me before, but all of a sudden it came to me as I was working on this commentary: Where are the tears in the book of Job?

One place, that is all. The tears flowed when the friends come to comfort him: “When they saw him from a distance, they could hardly recognize him; they began to weep aloud, and they tore their robes and sprinkled dust on their heads. Then they sat on the ground with him for seven days and seven nights. No one said a word to him, because they saw how great his suffering was” (Job 2:12 - 13, NIV).

After that, no more tears. They went after the suffering man with a vengeance. Perhaps the most vicious line is from Eliphaz: “Know then that God exacts of you less than your guilt deserves” (Job 11:6, NRSV).

The title to this article, “The Tears on God’s Face,” represents a deliberate contrast with the theme of the lesson in the official study guide, “Retributive Punishment.” The Old Testament presents plenty of violent punishment against sinners. But I am not sure that the tearless faces of Job’s friends should detract us from what Jesus can tell us about God’s attitudes toward sinners.

Taking the strong words of Job’s friends as a point of departure, the official study guide documents a number of the harsher judgments against sinners as recorded in Scripture. In the comments for Sunday, November 6, the study guide admits that the words of Bildad reveal “a harsh retributive legalism.” Yet the catalog of incidents that follows threatens to continue that line of thinking: the Flood, Sodom and Gomorrah, and rebellion of Korah, Dathan, and Abiram, and finally, the second death of Revelation 20:4, all under the heading of “Retributive Punishment.”

Through the story of Jesus, however, it is possible, to recover a picture of God with tears on His face and in His voice, as this quotation from The Desire of Ages suggests:

He fearlessly denounced hypocrisy, unbelief, and iniquity, but tears were in His voice as He uttered His scathing rebukes. He wept over Jerusalem, the city He loved, that refused to receive Him, the Way, the Truth, and the Life. They rejected Him, the Saviour, but He regarded them with pitying tenderness, and sorrow so deep that it broke His heart.  – DA 353

And in a tantalizing statement in Christ’s Object Lessons, Ellen White wrote, “God destroys no man. Everyone who is destroyed will have destroyed himself” – COL 84.  But how is it possible to take such a gentle and sorrowful approach to events that appear so vivid and violent in their Old Testament settings?  Here are some suggestions that could point the way.

1. Judgment is God’s strange act:  Even in the Old Testament where God sometimes appears so eager to wipe out sinners, Isaiah 28:21 refers to God’s judgment against the wicked as “his strange act” (KJV). That makes it easier for us to see God’s great love for all his children, even the wicked.

2. God’s protective judgments:  Both the earth’s destruction by the flood and the fire that consumed Sodom and Gomorrah can be seen as God’s protective judgments, sent to shield the innocent from violence. In Genesis 6, for example, these key lines stand out: “The LORD saw how great the wickedness of the human race had become” and “every inclination of the thoughts of the human heart was only evil all the time” (6:5); “the earth was corrupt in God’s sight and was full of violence.” On a smaller scale, the same situation was evident at Sodom and Gomorrah where Lot’s innocent guests were at risk: “every man from every part of the city of Sodom – both young and old – surrounded the house.” They called to Lot to bring his guests out “so that we can have sex with them” (Gen. 19:4, 5, NIV).

3. The Old Testament writers thought in corporate, not individual, terms:  The interest in individual salvation as seen in the New Testament is quite foreign to the thinking of the Old Testament. Of Abraham God said, “I know him, that he will command his children and his household after him” (Gen. 18:19, KJV). People were saved as part of a family, a tribe, not as individuals.  Even the most overwhelming earthly judgment may not determine eternal salvation.

4. By modern human standards, OT judgments were not even-handed. The tidy rationale of Job’s friends quickly breaks down when one looks at how God actually deals with sinners in Scripture. To us, the death of Uzzah for touching the ark when he was just trying to be helpful (2 Sam. 6:6) and the mauling of the 42 boys who mocked Elisha (2 Kings 2:23-24) seem extreme, especially when compared with immoral behavior of Eli’s two sons, Hophni and Phineas. As the NIV of 1 Samuel 2:12 puts it, “Eli’s sons were scoundrels; they had no regard for the LORD.” Indeed, they broke all the rules of priestly behavior when they took the priestly portion of the sacrifices offered at the sanctuary (1 Sam. 2:13-17) and when they “slept with the women who served at the entrance of the tent of meeting” (1 Sam. 2:22).  They eventually received their reward, but they carried the ark all over the country without being touched. In short, the “judgments” of God are highly unpredictable. Job’s friends did not want to admit that.

Finally, some reflections on the second death.  An article by J. Paul Grove, my mentor when I was an undergraduate student at Walla Walla College, was published in the Walla Walla College Alumni Review, Winter, 1976.  In it he reflected on the nature of the second death. Rather than seeing the second death as the ultimate in God’s retributive punishment, he described it as the natural result of our human choices.  These are the final paragraphs of his article. The end result is still wrenching, but it does allow us to see more readily the tears on God’s face. Interestingly enough, Elder Grove titled his article, “Do You Like God?” Given the chaos of our world, it is crucial that we see a God whom we can worship with all our hearts.  Here now are the closing paragraphs:

What is it, then, that actually destroys man in the second death? I suggest to you that we could express it in one word: “glory.” God’s glory destroys man in the second death. “Like Israel of old the wicked destroy themselves; they fall by their iniquity. By a life of sin, they have placed themselves so out of harmony with God, their natures have become so debased with evil, that the manifestation of His glory is to them a consuming fire” (The Great Controversy, p. 37). What is the word? Fire!

“This is not an act of arbitrary power on the part of God” (The Desire of Ages, p.764). Man himself determines how he will react to that glory. “He who is to the transgressors of His law a devouring fire, is to His people a safe pavilion” (The Great Controversy, p. 654). “While God is to the wicked a consuming fire, He is to His people both a sun and a shield” (Ibid., p. 673). “The light of the glory of God, which imparts life to the righteous, will slay the wicked” (The Desire of Ages, p. 108).

“How can the manifestation of His glory, His character, cause degrees of suffering and finally bring death?”

I suggest that soul agony or mental anguish is proportionate to the purity and the sensitivity of the conscience. That is why Christ died so quickly.

But Satan and all hardened sinners do not have a conscience; at least, a working conscience. That is, not until they try to take the holy city, after the thousand years and see that “great panoramic scene.” In that scene, they are shown all the events of earth’s history that have to do with the salvation of man and their need for it. They see Christ for what He is, how loving He is, how great He is. They see how awful they are by way of comparison. For a thrilling devotional sometime, read The Great Controversy, pages 662-673.

Christ appears above the city seated on a throne of burnished gold. “Around Him are the subjects of His kingdom. The power and majesty of Christ no language can describe…. The glory of the Eternal Father is enshrouding His Son. The brightness of His presence fills the City of God, and flows out beyond the gates, flooding the whole earth with its radiance.”

“As soon as the books of record are opened, and the eye of Jesus looks upon the wicked, they are conscious of every sin which they have ever committed.”

Now the suffering begins. The conscience is becoming sensitized. It may have been hardened, it may have been seared, but seeing every act in its true light begins to stir it. And the pain of conscience is the most difficult to endure. Notice the description in the same paragraph that talks about becoming conscious of every sin. “…all appear (that is, all the sins) as if written in letters of fire.” The sins burn into their consciousness as with letters of fire. That is mental agony!

“The awful spectacle appears just as it was. Satan, his angels, and his subjects have no power to turn from the picture of their own work. Each actor recalls the part which he performed…. They vainly seek to hide from the divine majesty of His countenance, outshining the glory of the sun, while the redeemed cast their crowns at the Saviour’s feet, exclaiming, ‘He died for me!’”

The awfulness of their sin slowly sinks in. Guilt and despair rise to a level that cannot be endured. Then the wicked die the same death that Christ died. It is a death caused by mental agony.

The purer the conscience in this life, the more quickly the blessed relief of death will occur. It will not take so long to fully sensitize it to the awfulness of sin. The redeemed do not have to endure that suffering! They “throw their crowns at the Saviour’s feet exclaiming, ‘He died for me!’”

What a picture of a loving God! Is there a literal fire in Revelation 20? Yes, that literal fire consumes the bodies of sinners already dead; killed by mental anguish and suffering. It rids the earth of every trace of sin. It melts the elements of the earth with fervent heat. The earth is purified. “God destroys no man. Everyone who is destroyed will have destroyed himself.”