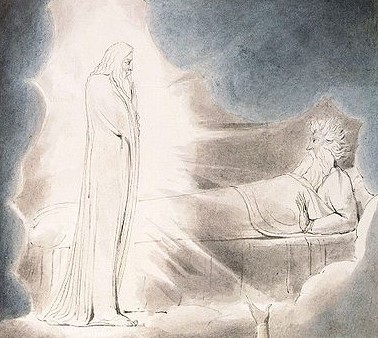 Talk about absurdity, that painful presence of meaninglessness! We bump into it everywhere. This morning, as I ran around Hamburg’s inner-city lake I couldn’t help notice the candles and flowers under the Kennedy Bridge. Two weeks ago, a sixteen-year-old teen was stabbed here by a still unknown assailant for no visible reason. The kid died. This weekend, Isis laid claim to the attack. The thought of my own sixteen-year-old daughter roaming around the same places makes me shudder. Job is everywhere, so it seems.

There is a family weeping in my town. What if I were their pastor or friend, asked to rush to their side, to witness and endure and alleviate their attrition? I hope I could be as good a friend as those of Job and shut it for the next seven days, sitting in their dust, weeping their tears.

But sooner or later the talking starts. So it is with Job’s friends. And there will be a lot of talking. Last year, our conference team decided to tackle the book of Job for our weekly devotional. Halfway through, everyone wanted to give it up. But I told them: Job sat through it and so will we! The writer of the book of Job makes the pain of listening to the repetitive arguments almost unbearable (unless you are heavy into Hebrew poetry).

While Job has the honor of kicking off the conversation (Ch. 3), it is Eliphaz who decides to enter the ring next. Mulling over Eliphaz’ first speech, here are three observations of mine:

Let’s reduce Job’s complaint and Eliphaz’ first round to the questions they ask:

The questions both ask seem to serve different purposes. The afflicted sufferer has basically one question: Why? It is not only a cry for meaning and sense but also an open question. While it can serve rhetorical purposes as in my son’s “why do I have to take out the trash?”, here Job tosses them as open petitions before God, expecting some kind of reaction or at least riposte. Why-questions are the most open questions, and I have often invited them from people who set out to attack me as a pastor, requesting: “before you carry on complaining, would you please ask me, why I did it this way? That’ll give me a chance to answer, and you a chance to change your mind.”

In contrast, Eliphaz’ questions are mostly rhetorical in nature. They don’t beg for a reply. They beg for consensus. The answers to the eight above-mentioned questions of Eliphaz are these: No, Nobody, Yes, Nobody, No, No, No, Yes! One-word answers. Not to comply to the expected mode of response would be to impolitely interrupt the learned exposition of the wise man. Rhetorical questions serve the speaker, not the listener.

Job’s why-questions, however, are thoughts dangerously let loose, searching either for fertile ground to sprout answers or for someone bold enough to catch them in mid-air. His friends’ answers, however, will be scattered with stereotypes, clichés, and conventional wisdom veiled “in something similar to a prophetic mantle.”[i]

Granted, Eliphaz and his friends are unhappy with some of what Job blurts out in pain. Granted, sitting next to a suffering person is no children’s birthday party (as we say in my language). But the contrasting reactions could not be further apart. Here are Job’s friends, and without words and arguments, they would be Job-less (pun intended). In the face of suffering and complaint, the pressure-control valve just pops, and verbal spurts shoot off. The friends have to vindicate wisdom, tradition, the cosmic order, and ultimately God Himself.

Much unlike Job. When his sons and daughters are out partying, he doesn’t wait at the door at 3 a.m., tapping his watch, barking at them: “Don’t you know what time it is?” He doesn’t give them “the paternal speech”. He doesn’t give them the notorious: “Jesus will wait at the door when you enter into that party.” He offers no words at all! Instead, he offers “burnt offerings according to the number of them all. For Job said, ‘It may be that my children have sinned, and cursed God in their hearts.’ Thus Job did continually.” (Job 1:5).

While the first of Job’s friends sets out speaking with respect and appreciation of Job’s character (4:1-4), the learned reader knows that Sam, Pippin, and Merry have embarked on a longer journey and that things will get worse.

Suffering is imbalance; it makes our cosmic scale tip to the wrong side. Wisdom is the search for a higher order of society that deals out sense when needed and runs faithfully along Newtonian-like laws, exemplifying the mechanisms of cause and effect. For Eliphaz, the law of gravity is retributive justice, as summarized in his rhetorical “Who that was innocent ever perished? Or where were the upright cut off?” (4:7).

I remember one day when some of the church members were very upset with the pastor’s children’s story, which I had missed. In short, he had told them how as a kid he was having fun with his mates playing a ballgame. But then the ball flew in the thickets, and they raked into it unsuccessfully. Finally, they remembered to get on their knees and ask God to show them the whereabouts of their ball. The pastor ended his children’s story thus: “You know, kids, God doesn’t always answer our prayers. To this very day I haven’t gotten my ball back!” He left the unsuspecting kids open-eyed and started his sermon, much to the chagrin of their parents.

Retributive justice is an integral part of the theology of biblical wisdom-literature[ii] and of Uncle Arthur’s Bedtime Stories and our children’s Sabbath School. It serves to teach kids and church members to take responsibility for their lives and not to blame God for everything that happens to them. In the face of suffering, however, the mechanistic do ut des is easily forced into the mold of cause and effect: if this is the effect, there must be a cause. And since it is not God who is responsible for bad things to happen, by force of deduction, it must be you (because it wasn’t me either). Much of what we hear in church is Eliphaz-stuff.

What’s wrong with that anyway since it’s biblical, as we have seen? Well, a swat will kill many but not all insects. There is a fine difference between complicated and complex. Rocket science is complicated, but it can be learned. Mathematics is complicated, but it follows rigid laws that can be mastered. Systems, however, are complex, people are complex, and ethical questions are complex. Complexity is experienced in the multi-factored and multi-facetted perplexity in the face of systems, be they biological or societal. Life is complex. For Eliphaz its just complicated, and he holds the key to unravel the mystery.

Let me illustrate with one encounter I had when still a pastoral intern. I visited a woman, and she told me about her financial difficulties. She was determined, however, that tithing was a moral obligation. The law of retribution (and even the much-quoted text in Mal. 3:10) says: you tithe, you prosper and vice versa. A couple of months later, I sat in her living room and heard her say: “Since I have stopped tithing, my finances are recovering pretty well.” I didn’t know what to retort. I just sent another prayer to God along the lines of: “Are you kidding me? I’m sorry, I can’t work like that.” That’s when I discovered once more that life is not complicated but complex. And so is faith.

The most daunting part of Eliphaz’ speech, however, is his nocturnal vision. Some expositors, obviously assuming divine provenance, limit the actual content of the vision to verse 17. They contend that verses 18-21 are but an imperfect interpretation of that vision. Others blame Eliphaz for claiming divine revelation to coerce Job to consent to his arguments.

If we view the alleged revelation as mere strategy, it would probably be tantamount to spiritual abuse. Bring in divine revelation to any heated argument by saying: “God revealed this to me,” and it will mute reason and reasoning immediately. If a hammer is all you have in terms of tools, every problem will look like a nail, the adage goes. Divine revelation is one such hammer. As Adventists, we know what we are talking about when we slash each other with yet another unpublished manuscript quote, “eliphazzing” each other.

Many commentators claim or complain about the absence of Satan from chapter 2 untill the end of the book. Recently, Sigve Tonstad[iii] has made a strong case against this assumption, pointing to the Leviathan-figure when God speaks in chapters 40-41.

Both external and internal pointers in the nocturnal vision, however, lead me to agree with D.W. Cotter, who seems to be headed in the right direction when he says: “Whoever spoke to Eliphaz that evening, it could hardly have been God.”[iv] Eliphaz’ depiction of the event is fuzzy: it is a nightly vision (v. 13), the appearance is indiscernable (v. 16), a spirit (v. 15), its effect is dread and shaking and tingling neck-hairs (v. 14, 15). It’s only a form (temunah: likeness, semblance), then a voice (v. 16).

Still stronger is the internal evidence of the actual content of the vision, which I think comprises the next verses. It starts out in v. 17 with a common-sense theologumenon along the lines of retributive wisdom literature (see above) but then takes on a different twist. Who could be saying: “Even in his servants he puts no trust” against the canvas of Satan’s barter with God? Who is the angel charged with error (v. 18) against an even greater biblical backdrop? The backbone of the argument qal wachomer[v] is not v. 17, but v. 18. This spirit seems to be speaking, and it seems to be reasoning autobiographically.

If Satan seems conspicuously absent from the rest of the story of Job, it is only because he has picked more subtle forms of getting Job where he wants him to be. If this is a contest, we should expect surprises, and here is one for those who keep the whole picture in mind. Remember, only God was speaking about fairplay.

It is easy to blame Eliphaz with the learned dictum from Latin class si tacuisses, philosophus mansisses (“If you had remained silent, you would have remained a philosopher”), for if there is one at least episodical summary of this week’s lesson, it might be this: Eliphaz is us.

Dennis Meier is the senior pastor of the Grindelberg Church in Hamburg, Germany.

[v] “How much more …”, the argument from the lesser to the greater, per Hillel.