Don't Miss It: Hacksaw Ridge Producer Explains Why Not

Hacksaw Ridge, the much-anticipated Hollywood film starring Andrew Garfield as famous Adventist soldier Desmond Doss, comes out this weekend. In an exclusive interview with Spectrum, filmmaker Terry Benedict, who produced the film, talks about his relationship with Doss, his 2004 documentary The Conscientious Objector, and why Adventists should take a trip to the cinema.

Question: Hacksaw Ridge, a Hollywood film about Adventist World War II hero and congressional medal winner Desmond T. Doss, is released in the US on November 4. Have you been pleased by the reaction to the film so far? Is there Oscar chatter?

Answer: The response has been overwhelmingly positive. And yes, I think there are people who are talking about awards. In fact, I haven’t actually seen a negative review yet. (Not to say there isn’t one out there, I just haven’t seen it.) I’ve been doing several mini preview screenings including the Q and A’s afterwards, and people are really impacted by the film.

One of the things Desmond and I really wanted to see was people leaving the theater evaluating themselves, as in: “Maybe I should look at my own lifestyle and how I am living.”

Obviously the film is intense. Mel [Gibson, who directs the film] did a terrific job of walking the middle road of balance: he gave a proper context to the story of a medic, which deals with the carnage and graphic nature of what happens on the battlefield, while also understanding and appreciating what Desmond’s heroics were all about.

When I was in post-production on the documentary [The Conscientious Objector], I was talking to producers and production companies around town, and one of my criteria was to find a producing partner who understood the magnitude of Desmond’s story and the essential need to keep the core of Desmond’s journey of faith and how that played out in his training and on the battlefield. It was important to keep that intact and pure.

Bill Mechanic, who was president of Twentieth Century Fox during the Titanic and Castaway days, got it. I really felt he would do everything he could to protect the core of Desmond’s story. He really became the champion and was the primary producer over the ten-plus years of development [of The Conscientious Objector], and he was the one who got Mel [Gibson] to come on board.

Mel, being a believer and a patriot, understood the faith journey of Desmond. And being an incredible filmmaker, he was able to find that balance and proper context for the film, and I really think he achieved it.

I’m really happy, and I know Desmond would be happy with how it turned out. 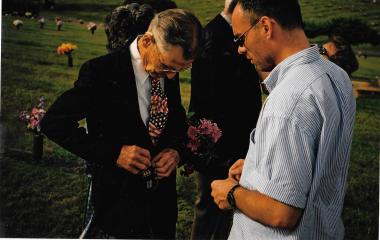 Terry Benedict with Desmond Doss at a cemetery ceremony.

How involved was Desmond in The Conscientious Objector?

Desmond was very involved in terms of participating. He had no involvement in terms of editorial control or anything like that. He trusted me to make those choices about what was important in telling his story. He was very much hands on, but he also let me be a filmmaker and tell the story the way I felt would be best.

Desmond was incredible; he became very grandfatherly to me. We had a very, very close relationship. We were able to create an environment where he and the other soldiers felt comfortable telling about things they had experienced on the battlefield but had never talked about before.

We’ve heard about that with the “greatest generation.” Those guys always kept everything stuffed inside. But the men we talked to were able to let it out. They knew their sands of time in the hourglass were running out, so they let their story out, and their families benefitted greatly as a result.

Their families had never known what their grandfathers, brothers, and uncles went through. This was a real side benefit to the film.

Why did you feel there needed to be another film in addition to the documentary The Conscientious Objector?

That’s a good question. Documentaries obviously, in terms of distribution, don’t see as wide an audience, unfortunately. Having said that, The Conscientious Objector is about to get rediscovered on the tails of Hacksaw.

I felt that a dramatized narrative would be worthwhile in the sense of helping people understand and feel and get a taste of what that experience must have been like. And again, that’s why I was very happy when Mel came on board.

In fact, we’ve had the military community present at almost all of the preview screenings. They come away very moved, saying that it’s the most accurate depiction of what happens on a battlefield that they have seen. They are very supportive of the film.

Last week, at Gary Sinise’s Sky Ball event for the veterans that he puts on every year, we screened Hacksaw, and everybody fell in love with the story. The generals I spoke to had been in the service long enough that they had heard of Desmond — some of them had even met Desmond — and so they couldn’t have been happier about how his story was depicted.

How did you become so interested in Desmond’s story?

That goes back to when I was ten years old. I read books – a lot of books. I needed something to do because my parents wouldn’t buy a TV until I was 12, I think it was. They just felt it wasn’t a necessary thing in the house. I had to do something, so I read a lot. And like a lot of boys, I was attracted to war stories and heroes, and so I read a lot about World War II. Then I came across this book called The Unlikeliest Hero, which was the story of Desmond Doss.

It was unlike any other story I had ever read: a guy who stood up for his faith in face of great obstacles in the military. All he wanted to do was be a combat medic, and they abused and harassed him for two-and-a-half years. Then, he saved many of them who were injured and wounded up on this cliff and couldn’t get down on their own power. He saved 75 of them — lowered them down on a rope. They recommended him for the Medal of Honor. He was the first conscientious objector to ever receive the Medal of Honor.

As a kid I was very impressed, trying to wrap my brain around how he did that and the magnitude of him standing up for his faith. The fact that he wouldn’t work on the Sabbath and yet found ways to still be a benefit in serving his community had a big impact on me. It helped form parts of my moral compass and how I wanted to live my life.

I came to meet Desmond a couple of years later at a church summer camp. He really loved talking to youth and sharing his story. And then, when I met him again in the late 1990s and talked to him, it was just like when I first met him when I was 12. He was that same loving, unassuming, humble individual. I sought his advice on many occasions; he was a very wise man.

He didn’t want his story told. He was too afraid that he would be glorified, and he wanted that honor to go to God. He was afraid that his character might be compromised, so I made him a promise that I would do everything I could to preserve and protect the essence of his character. I promised him that: “I’ll answer to God first, you second, and everyone else can get in line.” He laughed and he said, “Okay, let’s do it.”

What do you hope that people take away from Hacksaw Ridge?

That’s something that Desmond and I actually talked about at one point when I was explaining the importance of the universal themes of his story. One of those universal themes is that there is always an opportunity to serve your community and your fellow man — or God and country.

Maybe the military community has taken notice of Desmond’s journey and understands better now how diversity can work to their advantage.

Certainly we should all come away being inspired.

In the faith-based community, Desmond epitomized what it is to be a Christian and to be Christ-like. That makes Christians feel uncomfortable at times, but that’s the definition of a Christian: to be Christ-like, to demonstrate the actions the ultimate role model for Christians: Jesus Christ.

Desmond was not an evangelist; he did not try to win people over to his way of thinking. He simply was impressed by God not to kill, and he translated that into not carrying a weapon. But he didn’t go around saying, “Hey Buddy, you shouldn’t do that either!”

He actually said, “Listen, I support the war’s purpose and I understand and respect that others have been convicted to carry and weapon and to take life.” (There are plenty of examples of that in the Old Testament, obviously.)

I thought I was going to have a theological discussion with Desmond about that at the end of the documentary, but that’s what he simply said in 60 seconds. He said, “That’s how I believe,” and that was it.

Our readers are Seventh-day Adventist or come from an Adventist background, like Desmond. What would you say to our readers who are thinking about seeing the movie but are not quite sure about watching it?

First of all, I am taking my fourteen-year-old daughter and sixteen-year-old son to see the movie. They knew Desmond as little toddlers. When Desmond passed away, my son was six and my daughter was four, and they still remember him. That’s how important he was.

If the question is about going to an R-rated film: there is nothing gratuitous in this film. The R rating is there because of the graphic nature of war. Mel did a nice job of keeping the violence in the proper context of the heroics of Desmond. It’s all organically motivated.

My personal feeling is that we tend to live in a sterilized world where we don’t always understand things beyond our own experiences. There is a disconnect today where we probably don’t know what our military men and women go through in serving.

I do think that this is an epic cinematic experience that would be worth going to see in a theater. You don’t get the same experience at home. But that said, I think it’s an important film to see, even if you wait for it to come out on streaming or pay-per-view.

Adventists should know that this film, in very clear terms, points out that Desmond was a man of faith as part of his Seventh-day Adventist church and that he lived his faith every day. I would encourage Adventists to go see it because they can see how Desmond did this, and what he had to go through in doing it.

Whether you are an Adventist or not, I think you will come out of the theater with a tremendous appreciation for who Desmond Doss was, what he went through, and what he believed in.

How are Adventists going to talk about it if they haven’t seen it?