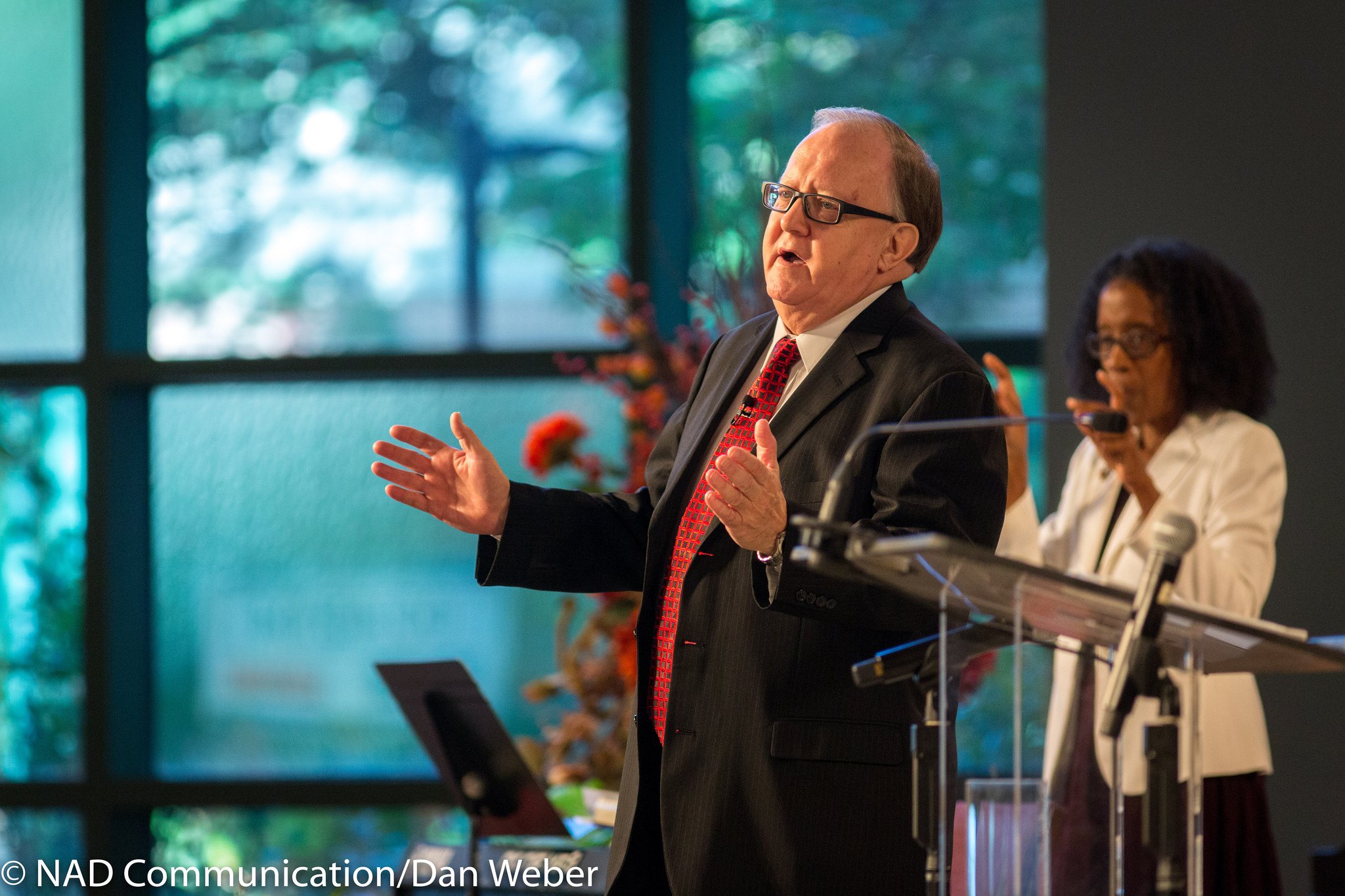 Rousing music punctuated the Divine Worship service. Pianist Bryard Huggins played twice in arrangements that ranged from bombastic classical music to tight jazz and brought down the house. The Union College Singers and Unionaires provided the offertory, and Jennifer LaMountain, one of Adventism’s most recognized female vocalists, preceded and followed Elder Jackson.

Introducing the morning’s speaker, NAD Executive Secretary G. Alexander Bryant called Dan Jackson a man appointed for such a time as this.

“We often call him ‘Dan’ but we forget his name is Daniel,” Bryant said. Murmurs rippled through the audience. “And Daniel went to the lion’s den,” Bryant continued. He invoked the song "Dare to be a Daniel." “Dare to stand alone,” the song goes. “But,” Bryant said, “there are many in the North American Division who stand with you. Even if it means going into the lion’s den, we stand with you,” Bryant said to loud amens. “Now, you’re the president, and you have to go first,” Bryant went on. “Let us know the appetite of the lions,” he said to laughter and applause. Then Dan Jackson stood to speak.

“My name is Dan Jackson; I am a broken human being.”

Jackson began his sermon with a confession and a call to placing Jesus at the center of the Adventist faith and preaching. If Jesus is not the center of our preaching, “I’m going to join the Kiwanis club,” Jackson said. “Young people, don’t believe us old guys if we are not preaching about Jesus.” Then, he turned to the Old Testament.

Jackson recounted the 2 Kings 6: 8-23 pericope of the King of Aram who was at war with Israel.

“The king brought in all his men,” Jackson continued. “He was furious that whenever he made a maneuver, he was psyched out.” The king of Israel anticipated all his moves. “He demanded of his officers, tell me which one is on the side of the king of Israel. Sheepishly one said, ‘none of us.’” It was Elisha, the man of God, who provided information to the king of Israel, thwarting the moves of the king of Aram. The king was furious and called for the head of the prophet. The prophet of God was holed up in a walled city. His enemies were in pursuit. They wanted to annihilate the people of God. “That is the historical context of the story,” Jackson said. "He knew he was being pursued."

Jackson continued narrating: When the servant of the man of God went out next morning, an army with chariots had surrounded city. Elisha looked at messenger and said, “Don’t be afraid. Those who are with us are more than those who are with them.”

1. “Open his eyes so that he can see.” The Lord opened the servant’s eyes, and he saw the hills full of chariots of fire surrounding Elisha.

2. “Strike these men with blindness.” When they were struck blind, the prophet said “you’re in the wrong place.” He led then from Dothan to Samaria, a trip of eight miles, and took them them into the city. Once they were in the city with army of Israel around them, he prayed,

3. Open their eyes so they can see. They saw the sun gleaming off the armour of the army of Israel.

The servant said to Elisha: shall I kill them? Elisha said, “No, feed them a potluck!” Jackson said. “He fed them tofu, and the armies of Aram never came back,” Jackson quipped. “I wouldn’t either.”

He offered three observations on the text:

First, it is only a miracle of God’s power and intervention that allows us to see into the spiritual realm, Jackson said. Based upon the apparent ineptness of Israel’s armies, the servant Gehazi concluded that all was lost.

Second, God’s realities are different from our realities. God opened Gehazi’s eyes, and he saw horses and chariots of fire. Jackson described Elisha’s servant as “confined by his eyesight.” But God’s reality provided opportunity to extend grace and salvation, Jackson said.

God’s reality, as Jackson described it, is a salvific reality. “God sees us at the victory banquet.” He quoted Revelation 7:9-14, which envisions a great, countless multitude “from every nation, tribe, people, and language.”

“Listen, when it says, ‘no man could count,’ it means it was more than 144,000,” Jackson said, departing from his notes for a moment. “Sometimes we get the idea that we’re going to purge the church and there’s only going to be 144,000 left and we’re going to have a ‘holy hoot.’”

He continued, “God is exceedingly and abundantly able to do for us way more than we’re able to do or think.”

Jackson spoke to the young adults present: “Young people, we’re relying on you. We need every single one of you.”

He quoted Ellen White, saying “The church is the repository of God’s riches of the grace of Christ.” He added, “It doesn’t always look that way, does it?”

But he stated emphatically that he believed it. “The church is the repository of God’s riches of the grace of Christ and, through the church, will eventually be made manifest final and full display of love of God.”

“God’s realities are different from my realities,” he said.

“The servant thought the only ally he had was Elisha. Spirit of God came into his mind, his eyes were opened and he saw the truth.”

Jackson said the present reality seems to be that, sometimes, those who are with us can be counted on one hand.

“As we submit our lives to God and enter into his reality--no matter how daunting the circumstance, no matter the odds, whether outclassed or out-strategized--those who are with us are more than those with them,” Jackson said. “If we put our trust in God, he will surprise us with joy.”

Jackson shared an account of a whale-watching trip with former North American Division President Don Schneider. They saw many whales and late in the trip, the two stayed on deck. Jackson noted that Schneider was weeping. “A few weeks ago I was going blind and never thought I’d be able to see such a beautiful sight,” Schneider said.

“When we put our hands in the hand of God, he will surprise us with joy,” Jackson said again.

“This is God’s church, and it always will be. Enfeebled and defective as it may be, it is still the object of God’s supreme regard, his sole regard, on planet earth.”

Returning to the biblical story, Jackson said, “Elisha, surrounded in city of Dothan, found that when God puts on the eye salve, even the blind can see.”