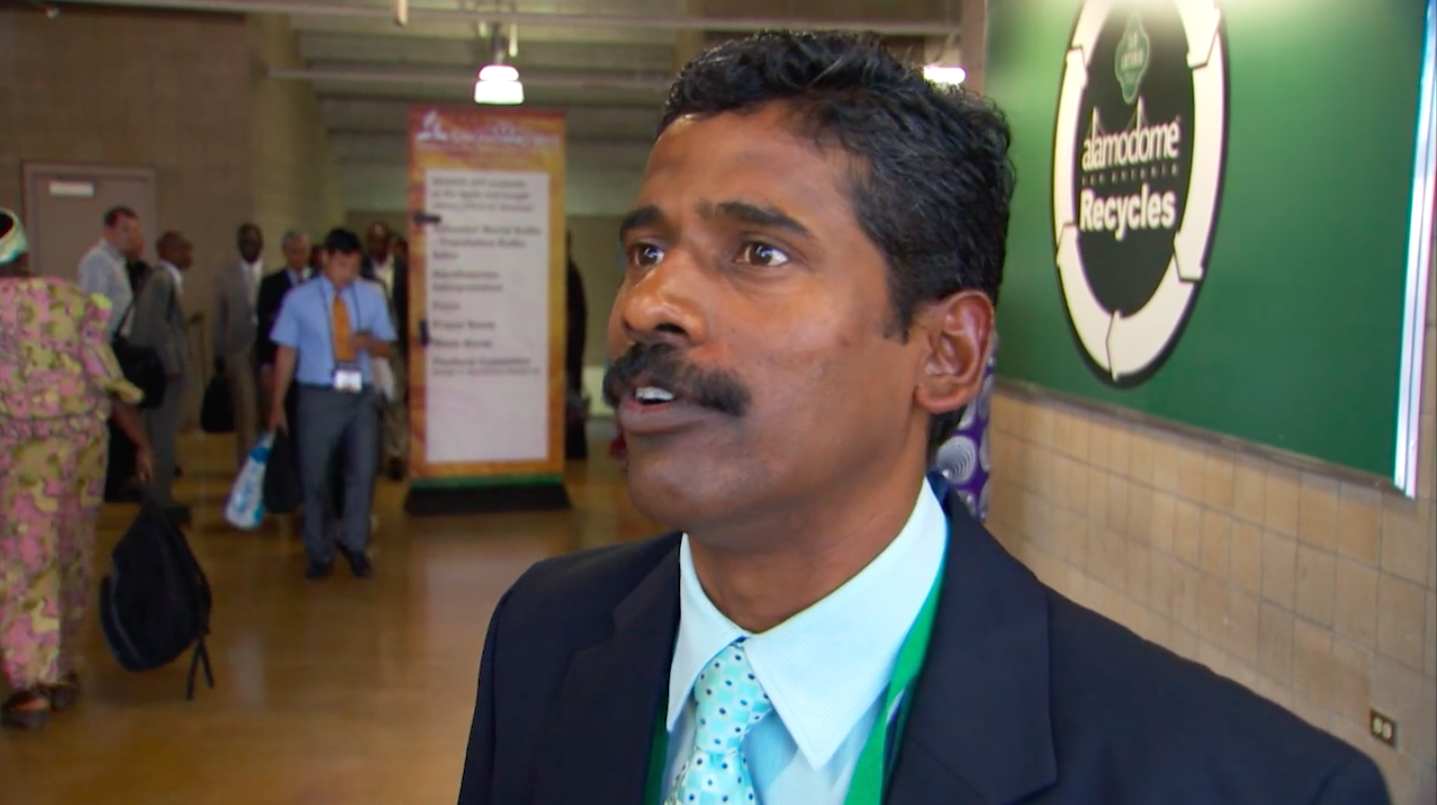 Paul Charles, who for several months has been denying charges of fraud concerning his academic qualifications (earned degrees), has reported to his superiors that he has completed a Bachelor of Theology degree from the South African Theological Seminary (SATS) in less than six months. According to the seminary, which provides degrees exclusively online, the BTh program normally takes anywhere from three to seven years to complete. Charles serves as Director of Communication and Public Affairs and Religious Liberty for the Southern Africa-Indian Ocean Division of Seventh-day Adventists (SID).

In a letter to SID President Solomon Maphosa, Charles credited divine blessing for his ability to complete his BTh degree in less than six months while serving as director of several departments and traveling for speaking engagements and meetings:

Please receive the attached official letter from the South African Theological Seminary which confirms that I have completed ALL requirements for my BTh. degree and will graduate at their next graduation date.

The question was raised before (with reference to me) as to how a person could complete their qualifications in a such a short space of time? I believe that the fact that I completed ALL the requirements for this Accredited BTh in less than 6 months (through the grace of God) instead of 1 year (as I asserted) or two years (as others thought) should provide proof in favour of my integrity that I can support what I claim. I want to humbly state again that my others degrees are not illegal and I have not done any illegal or unethical acts to acquire them.

Please note that I state the above, not as a matter of pride or arrogance, but as relief that there is tangible, verifiable, current evidence about the gift of learning that God has blessed me with and that while others may not believe that a person can do two years work in less than 6 months or acquire a Masters degree in one year or PhD degree in less than 3 years - it is possible! What is impossible with man is possible with God.

To view the Accreditation status of the Institution, please visit: www.sats.edu.za

At this point I wish to place on record that I have, by God’s grace served His church faithfully for the past 16 years (in full time employment) and having preached the gospel and the three angels’ message, in the Adventist church, for the past 29 years, since the age of 14 - my faith in the church is unshaken. I believe that this is God’s church and we will be triumphant, in the strength of Christ, our Supreme leader. I wish to now concentrate ALL my energies and gifts in the work of Lord, and hopefully, without hindrance or attempts to negate, nullify, or belittle my calling.

A letter from SATS, dated 21 October, 2016, states that “Dr Paul Charles...has completed all requirements for the Bachelor of Theology (360 credits). Dr Charles’ degree will be issued in April 2017.” The statement was signed by SATS registrar Jane Meyer.

The SATS Bachelor of Theology program requires 360 credit hours for completion (30 courses of 12 credits each). SATS allows the transfer of credits from accredited and non-accredited institutions for a fee and also provides “credits for life experience.” Charles would likely be able to transfer some credits for his brief time of study at what is now Spicer Adventist University and for his life experience as an administrator in the Seventh-day Adventist Church. An informational video linked from the SATS FAQ page provides timeframes for completing the BTh degree. The video states that the University of South Africa expects its students to take at least five courses a year. At that rate of study, student enrolled in the SATS BTh program should expect to receive an academic qualification (degree) in six years. A student studying at a full-time rate of ten courses a year could expect to complete a BTh in three years, the video says.

Paul Charles did not respond to request for comment on the specifics of his BTh coursework completion.

Longstanding Allegations of Academic Fraud
For many years, Charles has presented himself as the holder of a Master’s degree and two doctoral degrees with a third doctorate in progress. However, after scrutiny from church members and media reports exposing the extraordinary nature of his claims and questioning the legitimacy of the qualifications, division leaders eventually required that Charles complete his bachelor’s degree and stop presenting himself as the holder of doctoral degrees.

(SID initially responded to media reports that two leaders of the Adventist Church were being investigated for academic fraud with a strongly worded defense of Charles and Ratsara published on the SID website.)

An Emergency Meeting and Reversal
A change of course came at a hastily convened “SID Extraordinary Executive Committee Meeting” held on May 24, a week after the regularly-scheduled executive committee meeting had finished. The emergency meeting was called by General Conference President Ted N. C. Wilson, and the agenda was addressing the findings of the committees that investigated Charles' and Ratsara’s academic qualifications. Elder Wilson had been conducting a Total Member Involvement evangelistic series in Rwanda which he left to convene the emergency SID meeting.

According to meeting minutes obtained by Spectrum, after a devotional by Elder Wilson, votes were taken to “to rescind the EXCOM Action (Action # 16-040 – Allegations on Paul Charles’s Qualifications)” and “to express the EXCOM’s displeasure to Paul Ratsara for the manner in which he acquired his ThD qualification.”

Executive Committee members in attendance have reported that a motion to call for Ratsara’s resignation was put forward during the meeting, then rescinded, and that Charles was instructed to complete his bachelor’s degree. Neither action showed up in the meeting minutes. Ratsara attempted to offer his resignation at the end of the meeting but was told by Wilson to sleep on it and pray about it. Wilson purportedly said that the GC might not accept his resignation. One week later on May 31, Ratsara tendered his official resignation which was accepted by the General Conference.

Despite Paul Charles’ being required to complete his bachelor’s degree and stop presenting himself as holder of doctoral qualifications in speaking appointments as recently as this month, he continues to be introduced as “Dr. Charles.” The letter from the SATS registrar also calls him “Dr. Paul Charles."

Revocation of Paul Charles’ Ordination
Pressure to deal with what many characterize as Paul Charles’ defiant dishonesty has also come from the Southern Africa Union Conference (SAU) where Paul Charles worked prior to his appointment to the division office, and where he was ordained in 2004.

The union created an ad-hoc committee to look into the matter of Paul Charles’ moral and ethical conduct because many union leaders perceived that Paul Charles gained employment and ordination based on deceit. After the union committee escalated its investigation to the SID for information-gathering purposes, union leaders placed the issue of Charles’ ordination on the agenda for a special SID Executive Committee meeting called to appoint a new division president after Paul Ratsara resigned. The June 21 meeting was chaired by Ted Wilson.

During that special SID Executive Committee meeting, Wilson quashed discussion of Paul Charles’ ordination and its revocation, according to sources in attendance. Wilson asserted that “ordination is in the hands of whoever currently manages the person’s credentials.” Because Charles was employed by the division, Wilson contended that the union, which ordained Charles, did not have the ability to revoke Charles’ ordination.

SAU leaders took the question of revoking an ordination to General Conference legal counsel in order to determine whether Elder Wilson was correct in his assertion that the union lacked jurisdiction concerning Paul Charles’ ordination.

A letter of response from General Conference legal counsel dated 27 June, 2016 pointed to General Conference Working Policy section L60 25, which dictates that credentials pertain to the organization that employs a worker, but ordination pertains to the entity that carried out the ordination. While only SID could nullify the credentials Charles currently holds, his ordination can be revoked by the union that ordained him, according to Working Policy.

In early September, the union subcommittee that investigated Paul Charles’ conduct issued a report to the union administrative committee, which in turn approved a recommendation to the union executive committee: that the decision to ordain Paul Charles in 2004 be rescinded based on the fact that his ordination by the Southern Africa Union Conference was premised on fraud, deception, and lies. Union leaders have reported significant pressure from leaders of the Southern Africa-Indian Ocean Division not to take such an action. The union executive committee meets in two weeks for year-end meetings and is slated to vote on the recommendation from the administrative committee then.

Meanwhile, Paul Charles has used social media to hit back at those who have raised questions about his honesty and integrity. On July 19 Charles posted the following on Facebook along with a screenshot of the dictionary definition for “Kangaroo Court”:

Through the death of Christ - you hold a divine credential to heaven. No accusation of satan to diminish that credential is ever entertained without our advocate Christ defending us. Thank God that Christ is our Defender!

The next day, he posted an image with the text: “All the forces of darkness cannot stop what God has ordained. Isaiah 14:27”

Legal Proceedings Against Paul Charles
Lay members within SID have sent numerous requests to leaders of the division and of the General Conference for intervention. However, the many calls for accountability have been met with silence most of the time and hostility at other times.

In the face of intransigence at the division and General Conference levels, some lay members have sought the interposition of civil authorities.

Dr. Shaheeda Essack, Director of Private Higher Education Institutions for the South African Department of Higher Education and Training, wrote a letter to church members in April 2016 addressing Paul Charles’ supposed doctorate from Freedom Institute (a degree-mill in India with no physical address). Dr. Essack noted that the South African government would not recognize the qualification, and anyone purporting to hold a fake doctoral qualification would be in violation of section 66(2) of the Higher Education Act (1997), which states:

Charles is now under investigation by the South African Department of Higher Education and the National Prosecuting Authority of South Africa for charges including “educational fraud, fraudulent utterances, and one count of fraud for each month PQA was paid to Mr Charles amongst others for the last 16 years.”

General Conference legal counsel has been notified of the proceedings.