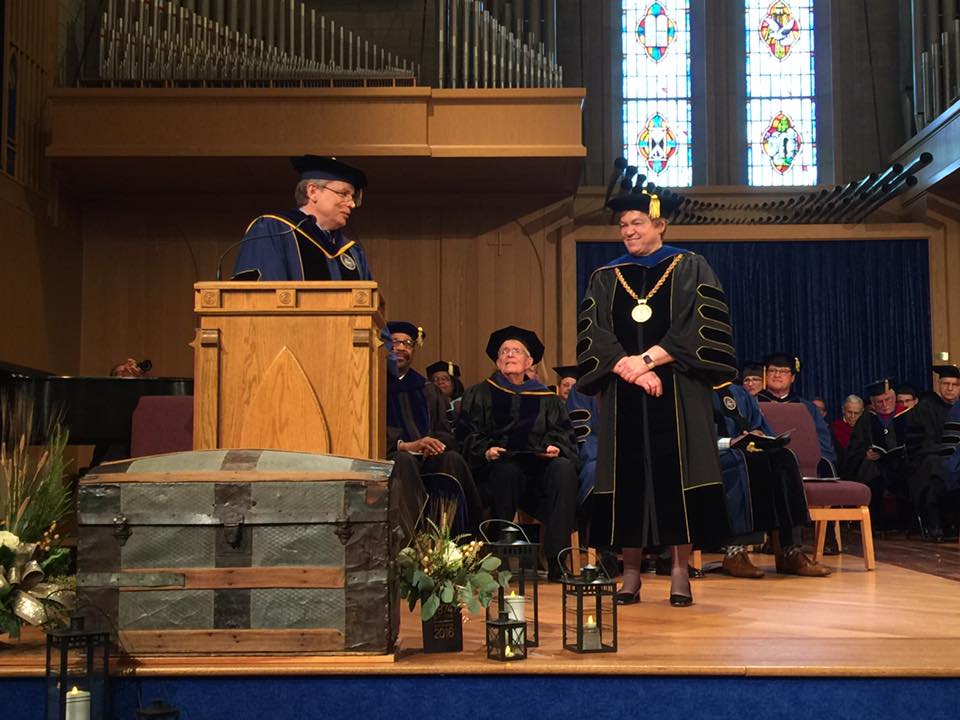 The inauguration ceremony of Andrea Luxton, sixth president of Andrews University, occurred on Tuesday, October 25, 2016, at 10:30 a.m. Presidents and official delegates from fellow Seventh-day Adventist institutions, as well as neighboring colleges and universities, were in attendance to welcome President Luxton to her new role.

Artur Stele, Chair of the Andrews University Board of Trustees and General Vice President of the General Conference of Seventh-day Adventists, oversaw the proceedings. Christon Arthur, Provost of Andrews University, delivered the scripture reading from Micah 6:6-8, and June Price, Lead Chaplain, offered the invocation.

Ted Wilson, President of the General Conference, sent a brief video greeting that was played for Andrea Luxton and the audience. Dan Jackson, President of the North American Division of Seventh-day Adventists, was in attendance and offered a warm welcome and blessings upon President Luxton and Andrews University. There were also greetings from the Andrews alumni constituency and the campus community.

In honor of President Luxton’s doctoral dissertation on John Milton, Professor Emeritus of English, Delmer Davis, read “Sonnet XIX: On His Blindness” by the poet.

William Johnsson, Former Executive Editor and Publisher of the Adventist Review, offered the inaugural address titled, “The Andrews Six,” in which he recounted the strengths and unique attributes that each of the previous Andrews University presidents has brought to their calling and the talents he believes President Luxton will bring to the future. Dr. Johnsson, who is a long-time friend of Dr. Luxton, interwove both amusing and heartfelt stories throughout his address of his decades-long friendship with the new president.

President Emeritus of Andrews University, Niels-Erik Andreasen, who was greeted with strong and long-lasting applause, officially welcomed Andrea Luxton to her new role. President Luxton delivered her response, stating the importance of the welcoming culture Andrews fosters and her dedication to preserving the sense of community that is present. President Luxton was met with a standing ovation from the audience. R. Clifford Jones, President of the Lake Region Conference of Seventh-day Adventists, then offered the benediction.

After the inauguration ceremony, official delegates and special guests attended the inaugural luncheon during which President Luxton was presented with a small trunk, handcrafted by an Andrews University staff member. The trunk bears a likeness to the original, larger, trunk that J.N. Andrews and his children used for their journey to Switzerland in 1874. The replica trunk is engraved with the J.N. Andrews prayer. Vice President of Campus and Student Life, Frances Faehner, stated that this inscribed prayer represented the 100 Andrews University student leaders who, for each of the first 100 days of the school year, have been praying for the new leadership at Andrews.

After the luncheon concluded, attendees were invited to a tree-planting ceremony in honor of the new President. More information about the inauguration, including a listing of all inaugural events, can be found on the Andrews University website here. For those who could not attend the ceremony, the event was livestreamed here.

Alisa Williams is Spirituality Editor of SpectrumMagazine.org. She also works as Assistant Director of Annual Giving at Saint Mary’s College in Notre Dame, Indiana, and attended the inauguration as an official delegate.