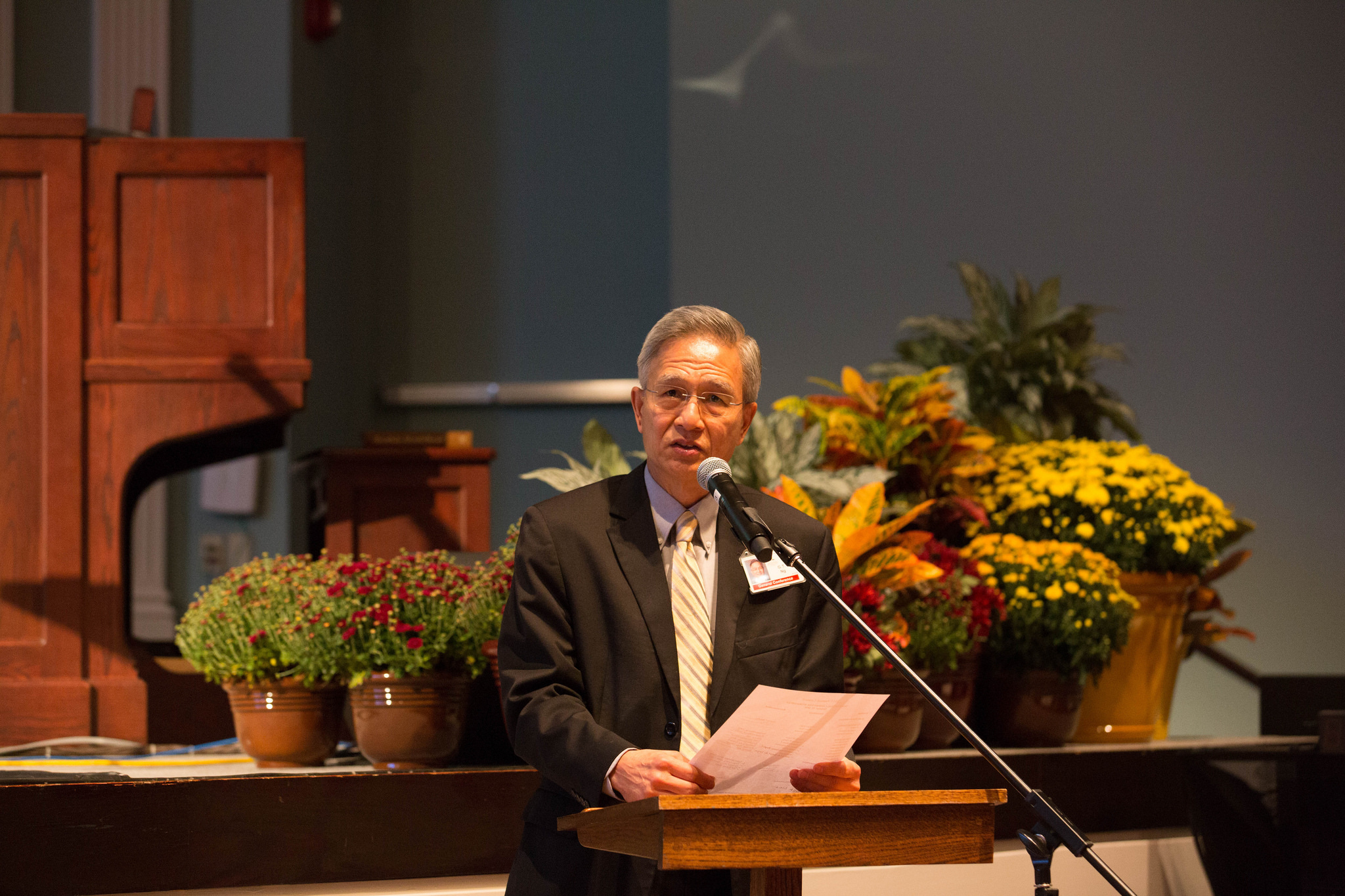 Testimonies bookended Sunday’s session of the General Conference Executive Committee that also included sobering news from Secretary G.T. Ng and the annual statistical report. The first witnessing stories came from the literature distribution activities of the day before when 100 students from Soul West joined with members of the Executive Committee in going door to door distributing literature and praying with the neighbors near the General Conference building. A woman came running up to the bus as the group was leaving. Several people worried that she was angry, but she just wanted to thank them for their efforts. They gave her more literature and declared that she left a missionary.

Secretary G.T. Ng sprinkled his annual report with amusing stories and photographs to begin and had people laughing before he moved into the somber news that he had to share. While the church now has 19.5 million members, he wanted to talk about those who have left. In the last 50 years, of every 100 people baptized, 42 did not return, an apostasy rate of 40-42%. And the rate has gone up to 49% in the last five years: of 18 million baptized, we have lost about 9 million. He compared this with the stories in Luke of the lost sheep, lost coin, and lost son. In these stories, there is a loss ratio of 1/100, 1/10 and 1/2. God does not want to settle for any of those losses.

Then he asked, what is a VIP to you? A Very Impatient Person? A Very Important Person? Who is the most important person in the church? “The church is made up of members, living beings

Without people, there is no church,” he said. With that, he flashed a logo on the screen that was made up of people. The pope made a trip to New York, he said, launching into another of his “stories." A limousine picked him up at the airport. He fell in love with the car and asked the driver if he could drive it. The driver said over my dead body. Well, shoot yourself said the pope; I want to drive this car. So the driver got in the back and let the pope drive. He turned out to be a speed demon and got pulled over by the police. The officer asked for his driver’s license and then went back to his police car and radioed his supervisor. I just pulled over a speeder who is a very important person. The mayor? asked his supervisor. No. A senator? After several such questions, the officer said, I don’t know who the person is, but the pope is his driver.

He went back to consideration of those departing. At what stage of life do they depart? According to the church’s studies, more than half of those who leave are young people. What happened when they stopped attending church? In those surveys, 40% of those who left said no one contacted them. However, if members are contacted after leaving, they are more likely to return. The Good Shepherd goes after his lost sheep; the woman searches for her coin; the father welcomes his prodigal son.

Quoting Ben Franklin that an ounce of prevention is worth a pound of cure, Ng said prevention is cure. Prevention is nurture. He had seven points to make on nurture, saying that it is part of discipleship, part of evangelism, and it should become part of church culture. It should be intentional, is best handled by small group ministries, and requires a team, a collaborative approach.

Do you know where your members are, he asked? His closing story was of Desmond Doss who kept going back for one more of his comrades on Hacksaw Ridge, praying as he went, “Help me, Lord, save one more.” Can we say with Desmond Doss, one more life? “To fulfill the mission of the church, we need the full army, not half of it. Saving one more should be the passion of Adventists.”

In the afternoon, however, a new segment was added to the agenda: a time for discussion of an issue from the strategic plan. Half an hour was set a side for members to comment on a study that shows support for some of the doctrines that seem to be slipping. What could the audience recommend? There were many suggestions: bringing together a room full of young people and listening to them and making the family the center of the church.

Then it was time for another business item related to the Netherland Union Conference. Since there are no conferences in Netherlands, the General Conference sent a survey team to the union to consider whether they should be reconstituted as a union of churches. This would take place in May of 2017. Vice President Tom Lemon presented the report with Claude Richli who was part of the survey team that interviewed pastors and looked at the financial position of the union. They said the motion to replace the current union conference had been accepted by ADCOM and was being brought to the body for a vote. Comments were solicited and taken, including the president of the union asking if they would have to wait five years before reapplying for union status. Lemon’s response was that a time frame was not included in the motion which was then passed.

The 50th anniversary of the Mission Institute, that provides for cross cultural training of missionaries, was noted and Russell Staples, one of its founders honored.

New books were introduced including a new Bible commentary on the book of Genesis from Pacific Press and a new release from the Biblical Research Institute on “Worship, Ministry, and the Authority of the Church.”

Nazareth Pastor Wisam Ali told his conversion story to close the day. It was an inspiring tale of a sister’s love for her brother and the persecution of the rest of the family in response. His choice to stand for God in spite of twice being stoned by his friends and family brought affirmation from the crowd as the meeting closed for the day.