"The End" and the Beginning

"The End" and the Beginning 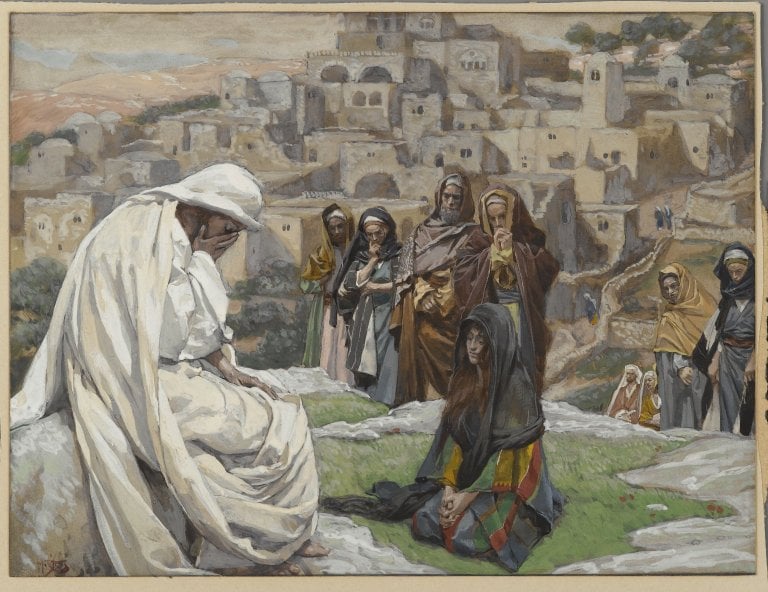 There is only one serious reason for not being a Biblical monotheist. This is an inability to integrate, theoretically and practically, the idea of a wholly loving and supremely powerful God, on the one hand, and all the evil in the world, on the other. Every other objection is either inaccurate, irrelevant, superficial, or all three.

That this challenge is both theoretical and practical deserves emphasis. Scholars in groups like the American Academy of Religion wrestle with it all the time in their specialties and sub-specialties. So must have the parents of an attractive young woman after a man confessed to being with several others who raped her, clubbed her to death, and threw her body into a swamp where an alligator presumably buried her order to eat her after she partly decayed.

As Jesus did, we must deal with these theoretical and practical challenges differently. When with Martha, Mary, and the others at the tomb of Lazarus, he participated in the feelings of those who were grieving. He wept. (John 11)

When he was leading his best students in a theological seminar, he pressed them with the hardest questions: “Do you really think that those whom the soldiers slaughtered in the temple were worse sinners than all the others?” Do you actually believe that those who were crushed by the falling tower were more evil than those whom it barely missed? (Luke 13) I know that you have been taught this sort of thing all your lives. What I want to know is whether you believe it. If so, why? If not, why not?” Though not in these exact words, he did quiz them along these lines.

In addition to the Bible itself and some good commentaries, plus the reflections by Ellen White on this subject which I find helpful, I recommend three books to accompany our lessons this quarter.

The first is God’s Problem: How the Bible Fails to Answer Our Most Important Question: Why We Suffer by Bart D. Ehrman (HarperOne Reprint Edition, 2009). Written by a former fundamentalist who is now a disillusioned and disbelieving but credible Biblical scholar, this book serves us well in two ways: (1) It effectively articulates the question and (2) it reliably surveys the Bible’s material on the subject.

True to his fundamentalist upbringing, Ehrman faults the Bible not so much because it has no answer but because it has several different ones, and he wrongly thinks it should speak with one voice. If he had been taught as a youngster that the Bible is not a book but a walking library of different kinds of literature from many different times and places, I doubt that he would now be so critical. Nevertheless, strip away Ehrman’s mistaken expectations, and you have a reliable and readable summary of the various things the Bible actually says on this subject. He teaches at the University of North Carolina at Chapel Hill.

The second is Suffering and the Search for Meaning: Contemporary Responses to the Problem of Evil by Richard Rice (IVP Academic, 2014). This book does for current philosophy and theology what Ehrman’s book does for the Bible, albeit in a less flashy and subtler way. A big plus is that Rice begins each chapter with a vignette that aptly introduces the material to follows.

“Openness of God Theology,” also called “Freewill Theism,” is one of the options Rice covers. This is appropriate because he launched what has become this major school of thought among Christians of many different denominations, and he remains active in it. He is now writing a history of the “Openness of God Theology” movement from the publication of his first book to this point. Rice teaches at Loma Linda University where I am honored to be one of his colleagues.

The third one is, Is God to Blame: Beyond Pat Answers to the Problem of Suffering (IVP Books, 2003) by Gregory Boyd. This volume is an application of “Openness of God Theology” to the problem of suffering. Except for a few of his paragraphs on prayer, which I will leave you to find, I think that the results are very satisfying.

A prolific and influential Biblical Scholar, historian, theologian, and political ethicist, Boyd is the Senior Pastor of the Woodland Hills Church in Saint Paul, Minnesota. He was also the keynote speaker at the Adventist Forum conference on “Non-Violence and the Atonement” at Silver Spring, Maryland the weekend of September 16-18, 2016.

Because this is the first of thirteen lessons, I offer some definitions that help me to delineate the problem perhaps more precisely. Let us take pain to mean discomfort of any sort: physical, emotional, intellectual and so forth. Let us then say that suffering is prolonged pain of any kind. Finally, let us say that evil is pain or suffering that is not outweighed by its benefits.

This suggests that the issue is neither pain as such, nor suffering as such, but evil. Pain is often a good thing because it can protect us from hurting ourselves or doing so again. For this protective purpose, it is often the case that the sharper the pain the better. Mild to moderate suffering is often a good thing too because it can be an unavoidable part of accomplishing things that are very worthwhile, such as graduating from college, running a marathon, or being a parent.

We have to be careful here, however. We must stipulate that severe suffering---very intense and prolonged pain—very rarely helps anybody. We need to say this, and say it clearly and repeatedly, because it is much too easy to talk about “the redemptive value of suffering.”

The most common answer relates to the literary composition of the Book. Many say that, if we include the prose Prologue (Chapters 1 and 2) and the prose Epilogue (Chapter 42: 7 – 17), which appear to have been added to the poetry at a different time, the resulting story rescues Job’s pain and suffering from torturing him for no good reason. On the other hand, the answer typically goes, if we exclude them, Job’s agony is wholly without compensating benefits, and therefore, it is in fact very evil.

Without taking a definitive stand on it one way or another, I suggest that for the purpose of our discussions this quarter that we take theological advantage of these linguistic issues and ask ourselves and each other these two questions:

1.        Is it actually the case that, as including the prose might suggest, in this world there is apparent evil but not actual evil because all pain and suffering fit into God’s good plans even if at the time we don’t understand what is happening?

2.       Or, is it actually the case that, as excluding the prose section might suggest, in this world there is actual evil as well as apparent evil because sometimes terrible things happen to people that are not part of God’s good plans even if we think that we have figured out how they do?

There is a third option. It is that, with or without the prose sections, neither of these captures what the book of Job is all about. Have fun!