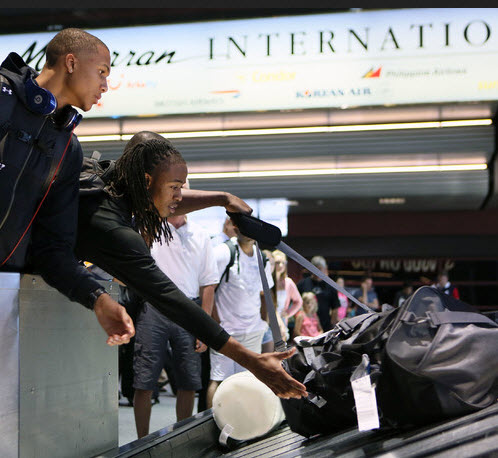 I don't follow celebs like most people I know. I've lived in New York and Southern California, and I can recall meeting a celeb on the street exactly two times. One was in a NYC Old Navy store when my friend excitedly ran to greet "Ms. Raphael" while I kept shopping. I asked him later if that was an old teacher of his. He gave me the side eye as he explained it was Sally Jesse. Oh. The other time was at LAX. I started walking in the direction of a man near the carousel. He stood tall and smiled. I smiled back and asked him to please step aside so I could get my bag. He looked slightly bemused, and I couldn't understand his puzzlement. I mentioned it to my brother who was on the other side and nodded toward Mr. Bag Blocker. He said, "Oh, that’s (some famous basketball player whose name I've since forgotten)! They just won the championship. He probably thought you wanted an autograph and was puzzled when you didn't ask." Nope. I know names but not faces and hardly any names. So when Nate Parker's name was batted around social media I was classically unaware.

I've since learned about his film career … and the rape case that occurred in college. Apparently he initially didn't admit to any wrongdoing. He was found not guilty though his friend was (that was overturned two years later). He continued to deny there was any rape and to say that the sex was consensual. Some say the fact that he previously slept with the victim weighed on the decision to not convict. Some say it wasn't the defining factor. Based on our justice system's historical treatment of rape cases, I'm inclined to believe that it had some bearing on the verdict even if there were other reasons given.

Which brings me to my dilemma. History. Recently Nate did an interview with Ebony about his college actions. Specifying that he wasn't speaking about any particular situation, he noted that, 20 years ago, his ideas about consent were different than his thoughts today. He conceded that he knew "no" meant "no," but he thought any other reply besides a strict "no" was an implicit "yes." This isn't a far-fetched claim. I mean, that's why we have such a fierce movement for consent education today: because it wasn't until the 21st century that our campuses have written explicit laws that only "Yes" means "Yes." No response isn't "yes." In the 90s, that wasn't ubiquitously taught.

In fact, going just slightly further back in time, the 1989 A Different World episode that taught "no means no" was considered revolutionary ("No Means No" [A Different World 1989])! It wasn't that it hadn't been said before, but there were still vestiges in the minds of many college kids (and adults) as to whether or not gray areas existed even with a "no." So in 1999, it's not unfathomable that Nate's perspective really was just go til I get "no."

I am far from a rape apologist. So this shouldn't be seen as a defense. I simply want to broach the question about our presumption of guilt or innocence. I believe "only yes means yes" is great. It dissolves ambiguity. This is why--as I've previously written – we should teach this concept even in our faith communities and churches. But that wasn't "a thing" 20 years ago. Now, I do believe wrongness today is wrongness yesterday. Sex with someone with no explicit consent shouldn't have happened in any time period. But are the "wrongness" of the past and the "wrongness" of the present equivalent?

For example: today corporal punishment of any kind is illegal in various places around the world. But many adults in America can remember being "whooped" as punishment. Parents will often say that "spare the rod, spoil the child" was what they knew about parenting. I don't want to get into the opinions about spanking per se. But for the sake of argument, regardless of what you may or may not actually believe, let's pretend that you agree that spanking shouldn't be done at all. So, looking at past actions from your present vantage point, were parents of the past all guilty of abuse? That wasn't the law of the land, so from a legal point, we know the answer is no. But morally was it equivalent to today?

I have this dilemma with biblical passages. Some parts are prescriptive (you should do this), and some are merely descriptive (they did do this). Situations like these are often used by non-Christians to "prove" the sexism or racism of the Bible, its authors, or its narrative subject – or even the fact the God isn't real. Exacting a dowry for your daughter like you own her is frowned upon in 21st century in the U.S. (but not everywhere), but back in the day, it was the custom. That isn't something I believe should be done. But we can't escape the fact that it was done. Does that mean all those people were evil? Can we impose present standards on historical situations?

These questions are not to be confused with normative moral relativism (which hesitates to even label things as moral or immoral); rather, these belong much more in the descriptive moral relativism camp. People of faith often don't like to classify themselves as moral relativists, claiming such things as apostate and shunning the very discussion of such subject matter (like so many other "taboo" genres). However, not acknowledging any form of relativism puts us in the position of either condemning all of our heroes of faith or excusing sexist and xenophobic practices shown in stories of the Bible as acceptable even today.

Getting back to more current society, the water gets murkier the closer in time scenarios are to the present. Maybe we wouldn't hold someone culpable in the same way for actions done 2,000 years ago as we do 20 years ago. Or would we? Do we say regardless of when or what was the social understanding, wrong things are always "wrong"?

I haven't proposed answers to these questions because I haven't fully formed answers within myself. Viscerally, I want to say it doesn't matter what one believed about what he did; the same wrong is wrong throughout time. But I feel that's overly simplistic. And I'm not posing these questions because I'm some big Nate Parker fan – I clearly had no clue who he was or what he did prior to these headlines. I wouldn't know him from Mr. Bag Blocker. And if a woman he "slept with" was actually unconscious at the time, then there's no ambiguity – that's rape. I am publicly discussing these questions in general because it becomes far more difficult to wax philosophical when the issues at hand are not just "academic musings" about historical events, but instead, are relevant to circumstances in our present day.

Courtney Ray is a native New Yorker who ministers in the Greater Los Angeles Region. She is a PhD clinical psychologist and ordained pastor serving in Southern California Conference.