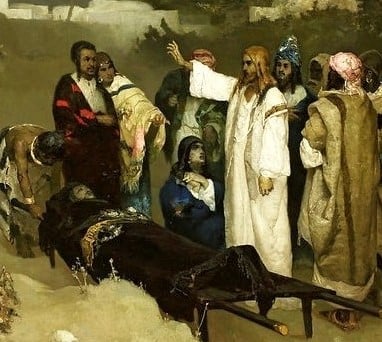 There is little more painful than the death of a child. Whether unborn, at birth, or later, something deep inside us rebels at the thought of a child dying or preceding their parents in death. Who didn’t feel pain reading the story of five-year-old Julianna Snow’s end-of-life conversation with her mother?[1] Who watched the news of Sandy Hook unfold without feeling anger toward the shooter and compassion towards the parents?

Luke Chapter 7 finds Jesus in the presence of a parent who has just lost a child. As he and his followers enter the town of Nain, they are met by a sorrowful procession. A boy has died. We do not know the age of the son of the widow of Nain. Jesus addresses him as “young man” in verse 14.

Luke takes great care to inform the reader that the dead boy is the “only son of his mother,” a widow. As a widow, she would have depended upon her son to care for her and continue the family line. Jesus would have known this all too well. In just a few chapters, he too will die, leaving behind a weeping mother. John 19:26 recounts Jesus giving Mary into the care of “the disciple whom he loved.” But the widow of Nain, it seems, has no one.

Slowly and sad a funeral-train

Advances from the gates of Nain,

As Jesus walks along the plain.

The corse they bear—a widow’s son!

Ah! how she weeps! her hope is gone,

And she is friendless and alone!

Jesus sees the woman and, Luke says, “he had compassion on her” (Luke 7:13). With the comforting words, “Do not weep,” Jesus approaches the bier. Luke tells us that “he touched the bier, and the bearers stood still” (Luke 7:14). Have you noticed how tangible some of Jesus’ healings are? Touching the leper, putting spit on a man’s tongue, rubbing clay on a man’s eyes, and now touching a bier. According to Mosaic Law, such corpse-contamination would defile him (Num. 19:11). Jesus is not worried about that. He addresses the boy, “‘Young man, I say to you, arise.’ And the dead man sat up and began to speak” (Luke 7:14).

It is worth noting that this act is not only a miracle, it is an act of social justice. Widows were a vulnerable demographic, along with the fatherless and sojourners. Old Testament laws regarding their welfare make it clear that the community was responsible for their care (Example: Deut. 24:19-21). Jesus’ took that responsibility to a new level in resurrecting the widow’s son.

Jesus’ sympathy goes beyond emotional pity or sorrow to find expression in action. He fights back against that which oppresses humanity, whether death, sickness, socio-religious manipulation, or any other result of sin. In Matthew 14:14, Jesus saw the great crowd and not only “had compassion on them,” he “healed their sick.” Through his sympathetic actions, he subverts the devil’s domination of the world. His miracles are not so much supernatural as they are a restoration of perfect creation. As Jürgen Moltmann states in his book The Way of Jesus Christ, Jesus miracles “are the only truly ‘natural’ thing in a world that is unnatural, demonized and wounded.”[3]

Jesus’ greatest act of compassion occurred on the cross. The characters are familiar: a grieving mother, a dead son, and a group of mourners. But through his death and resurrection, he won the battle against all sin. “Finally, with the resurrection of Christ, the new creation begins, pars pro toto, with the crucified one.”[4]

The compassion of Christ continued after his Ascension. Ellen White writes in Desire of Ages, “He who stood beside the sorrowing mother at the gate of Nain, watches with every mourning one beside the bier. He is touched with sympathy for our grief. His heart, that loved and pitied, is a heart of unchangeable tenderness. His word, that called the dead to life, is no less efficacious now than when spoken to the young man of Nain. He says, "All power is given unto Me in heaven and in earth." Matt. 28:18. That power is not diminished by the lapse of years, nor exhausted by the ceaseless activity of His overflowing grace. To all who believe on Him He is still a living Saviour.”[5]

In the story of the widow of Nain, we see a compassionate God, a God who overcomes evil, and a God who brings life to the dead. Surely the life he offers is not to those who are only physically dead. John Dunmore Lang concludes his poem with the following lines:

Jesus, my God! I too am dead

In sin, and quickly were I laid

In hell for ay, without thine aid!

Soon shall I ope my closed eyes,

And wake to life and heavenly joys![6]

To the oppressed, the grieving, and the spiritually dead, Jesus offers overflowing life. His sympathy extends beyond pity offered at arms-length or institutionalized welfare. His sympathy goes to the heart of the problem—evil—and attacks it. In the power of Jesus’ sacrifice, we too can be agents of militant sympathy, assaulting the norm of pain and suffering by pointing to one who suffered on our behalf. By following Christ’s example, we can embrace the suffering world and offer more than just a Band-Aid for its wounds. We can show it how to be healed.