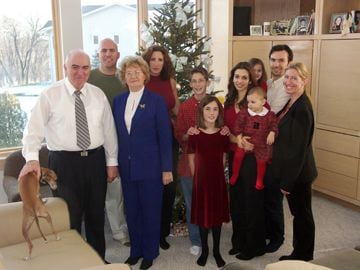 Anna Bacchiocchi, the widow of Adventist theologian and author Samuele Bacchiocchi, was found deceased in her Berrien Springs home on Sunday, according to local news reports. Her son and daughter-in-law found her unresponsive. Emergency personnel determined that she died from exposure to carbon monoxide. Her dog was also found dead inside the house, which tipped off authorities to a potential gas leak. The source of the carbon monoxide has not been determined, though investigators suspect it may have come from a car inadvertently left running in an attached garage.

Andrews University, where Samuele Bacchiocchi taught religion for many years, issued the following statement on its website:

Anna Maria Zeferina Gandin Bacchiocchi, 77, fell asleep in the Lord on Sunday, August 7, 2016. The youngest of four children, Anna was born in Conegliano, Italy on August 25, 1938. In high school she began a friendship with Samuele Bacchiocchi. And after completing her nursing degree at Clinique La Lignere, Switzerland, the happy couple was married on December 21, 1960 inside the small chapel of Andrews University's Theological Seminary. From 1963–1969 Anna and Samuele served as missionaries in Addis Ababa, Ethiopia, and it was during that time that they joyfully welcomed the arrival of two children: Loretta and Daniele. The family moved to Rome, Italy in 1969 for Samuele to complete his PhD. During that time Anna gave birth to Gianluca. And in 1974, the family moved to Andrews University in Berrien Springs, Michigan where Samuele taught church history and Anna brilliantly managed the home and education of three successful children.

Anna was a lady of kindness, grace and beauty, with culinary skills that delighted all palates. But most importantly, she was a woman of faith who daily lifted up her family and community in prayer.

She is survived by her two brothers, Antonio and Martino; her sister, Gina; three children, Loretta, Daniele and Gianluca; two daughters in-law, Michelle, assistant professor of teacher education in the Andrews University School of Education, and Silvia; and five grandchildren, Christiano, Lauren, Isabella, Gianna and Enzo.

She was preceded in death by her husband, Samuele, in 2008.

Funeral services will be held on Friday, August 12, at Pioneer Memorial Church. Further details will be added as they become available.