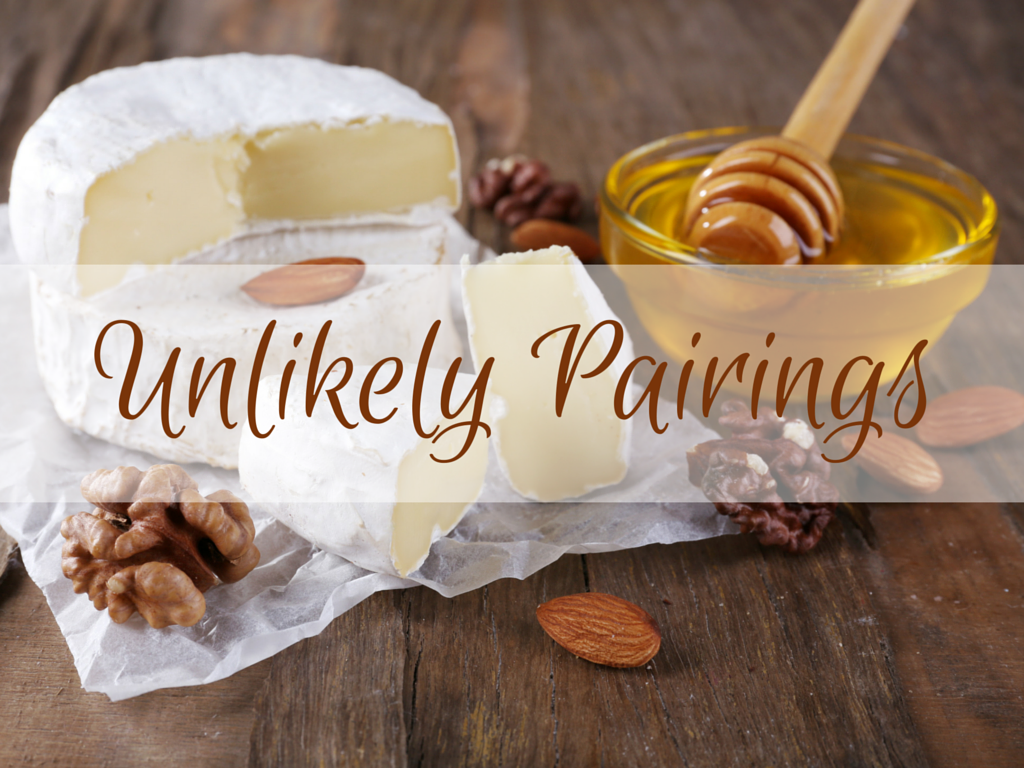 The art of cooking has always included using varied combinations, but it seems like food culture has taken an accelerated interest in unlikely food pairings:

When it comes to food combinations, success is in the palate of the taster. Some combos have an iconic status, like pickles and ice cream for a pregnant woman. Some combos are only appreciated within certain groups – like toast, peanut butter and applesauce, known as “Vandeman’s Breakfast,” amongst a segment of Seventh-day Adventists.

In what one might view as an unlikely pairing, attentive kingdom seekers will notice a lot of people living big pieces of the gospel minus the pro forma identification of “Christian.” For example, Brené Brown rocketed to fame with her TED talk entitled “The Power of Vulnerability.” Her title uses the seemingly opposite concepts of power and vulnerability, yet Bible readers know that the combo of vulnerability and power occurs repeatedly in scripture. Masses have resonated with the nuanced truth that Brown described in her short speech.

A couple of weeks ago an Iraqi Muslim man saved hundreds in an act demonstrating God’s grace. When the Iraqi realized another man was wearing a suicide vest, he gave that terrorist a hug, absorbing the initial blast of a bomb detonation with his own body. Unfortunately, news of violence within the US crowded that heroic story out of the public eye.

For those claiming to be Christ followers, the paradoxical walk of discipleship puts one in situations that feel counterintuitive. Just over a year ago, survivors at Emmanuel African Methodist Episcopal Church were not living conventional human wisdom when they immediately forgave Dylann Roof, the accused white-supremacist mass murderer who killed nine people after sitting with them in a Bible study.

Scripture records a lot of puzzling pairings. God promised old man Abraham that he would be a father to many nations, and then God allowed con man Jacob to be a vessel to fulfill that promise despite Jacob’s all night wrestling match with an angel. God called a murderer, slow of speech and with a weak tongue, to lead Israel from captivity to a homeland, and then faithfully bore with the Israelites who, fresh from the experience of a miraculous release, repeatedly wallowed in a swirl of complaints and doubt. One has to see the Holy Spirit at work when considering the sweep of history throughout the Bible that shows God’s faithfulness in the midst of many unlikely situations.

Jesus, of course, adds dimension to the nature of divine/human interface, by describing an upside down gospel with unlikely pairings. When given His first pulpit at synagogue, Jesus read from Isaiah 61:

The Spirit of the Lord is on me,
because he has anointed me
to proclaim good news to the poor.
He has sent me to proclaim freedom for the prisoners
and recovery of sight for the blind,
to set the oppressed free,
to proclaim the year of the Lord’s favor.”
Luke 4:18,19 (NIV)

Luke records that Jesus chose to read from Isaiah 61 without continuing to include Isaiah’s phrase, “day of vengeance of the Lord.” Listeners would have noticed this omission as they were expecting to see divine vengeance in which a messiah would help them secure their identity and pay back the evil of their oppressors. But in that synagogue appearance, after omitting the vengeance reference, Jesus proceeded to repeat other incongruous historical facts that defied conventional wisdom of religious leaders.

First, Jesus reminded the audience that Elijah was cared for not by an Israeli widow, but a foreign widow from Zarephath.

Then, Jesus recounted that despite the existence of many Israeli lepers, only Naaman, the Syrian soldier, had been healed.

Confounding expectations, Jesus’ first public oratory claimed Isaiah 61 was being fulfilled real time. It was good news as present truth. Calling for no wrathful vengeance, He cited stories of God’s prophets being channels of grace, offering provision for foreigners and healing for enemies. In an unexpected pairing, God’s justice overturned the human expectation of retributive violence.

Jesus gave Nicodemus a bit of unlikely advice by saying that he must be born again. This impossible sounding rebirth would not be contained and orchestrated – it would be like the wind. For us, on the heels of the modern era, it is helpful to think of the Spirit as more of an artisan than an industrialist. I know a lot of people who have been turned off after being surrounded by a mass production of know-it-all Christians toting God facts with a name-it, claim-it formula for escape to the afterlife. Such a simple transactional rendering of the gospel feels inadequate in a complicated world, because it does not allow the texture and richness that is being spoken loudly by varied voices in unlikely places.

It feels shallow when preachers with a large followings say, “Believe, say, and do. Then you will be blessed, saved, and successful.” Is this really the gospel? Have we mastered the mystery of God so that now we (who claim to know) can dole Him out in standardized portions? Have we forgotten Jesus’ description of the Holy Spirit as being like a wind? Has our current corporate Christian culture made it so that we have lost the ability to affirm the mysteries of discipleship? Does organized Christianity feel threatened by the notion of a wind-like Holy Spirit which might chip, distort, or sweep away carefully constructed assumptions?

Jesus inverted the orthodox outlook when He spoke of the Parable of the Lost Son and told the story of equal pay for laborers without regard to length of time worked. Jesus bent was to embrace all. He said His followers should lift Him up – and in that way draw all men to Him. Lifting up Jesus demands full attention so that one has no energy to stratify the status of others. The human default is to participate in the ancient sociological exercise of deciding who is in and who is out. Loud voices claim that the wise course for society is to identify and categorize others – blue lives, black lives, Islam, LGBTQ, liberals, emerging church, self-supporting, feminists, historical SDAs, foreigners – ignoring the reality that God’s wisdom is not of this world.

Once one sees the cross as a demonstration of the size of God’s love, the concept cannot be unseen, but is transformative for all life. The unlikely image of God as a forgiving victim is available to everyone, but it is not always perceived in its infinite complexity. Crucified creator on a cross, forgiving His created beings as they kill Him – that is an unlikely pairing. We will spend eternity studying what it means, I guess. Becoming the forgiving victim. Taking the title of “Lamb of God.” Even in Revelation, a book predicting God’s final victory, the title “Lamb” is used 28 times and “Lion” only once. Jesus defied most human expectation about what God would be like.

Ours is not a stingy God of scarcity. God did not have to be coerced into loving humanity. Modeling God’s power in vulnerability, Jesus came to change the mind of humanity about God.

So, how does a disciple live? Consider this tweet:

Q: What does God want me to do?
A: Whatever you want to do within the parameters of goodness, beauty, and truth.

And think about practicing this spiritual discipline:

And we all, who with unveiled faces contemplate the Lord’s glory, are being transformed into his image with ever-increasing glory, which comes from the Lord, who is the Spirit.” 2 Corinthians 3:18 NIV

Look to Jesus. Lift Him up. Be imitators in love. You will be placed in situations that require being a part of some unlikely pairings. Relish the moment.