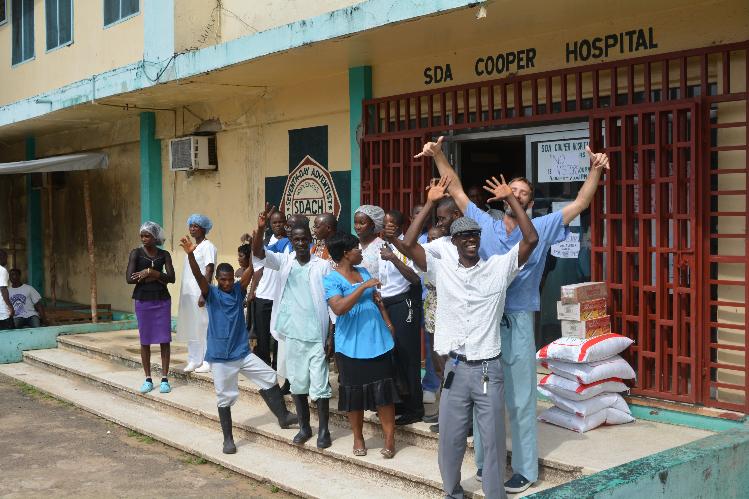 In late 2014 and early 2015, West Africa was dealing with a massive Ebola outbreak, unable to contain the chaos. Hospitals there were faced with a crisis for which many were unprepared. News of the suffering in West Africa impacted students at the Loma Linda University School of Medicine (LLUSM).

The LLUSM Class of 2016 set out as medical students in 2012. After their first year, many students spent their summers serving in mission hospitals in Africa, South America and Asia. This opened their eyes to the healthcare needs of underserved communities and inspired them to take on a sustainable, international mission project as a class. In their second year of medical school in early 2014, the class sponsored Cooper Adventist Hospital in Monrovia, Liberia. This was before the Ebola crisis hit Liberia.

“The initial goal was to raise about $40,000 for operating room renovations and a ramp to the OR as it is currently located on an upper floor of the hospital and patients must be carried up a flight of stairs,” said Paige Stevens, M.D., LLUSM Class of 2016 member and officer. The class ended up meeting their fundraising goal when the Ebola epidemic hit Liberia, but decided to keep working, setting a new goal of $100,000 to reach by graduation. Stevens said the class and Adventist Health International are “now in discussion with the hospital as to how those funds will be used to aid further renovations as well as establishing an endowment that will continue to pay forward to the hospital,” said Stevens.

Sponsoring Cooper Hospital proved to be a bigger and perhaps more challenging project than the class anticipated. As Ebola spread throughout the region, Cooper Hospital remained the only hospital in Monrovia that was reserved for non-Ebola cases, serving patients with malaria and emergent obstetrical and surgical needs.

“Liberia has weathered the Ebola crisis and now both the country and Cooper Hospital are in a rebuilding and recovery phase,” said Stephen Thorp, M.D., Class of 2016 vice president. “Due to the economic challenges caused by the Ebola epidemic, construction on these projects has been delayed. But in the last several months, significant headway has been made. Renovations to the OR have started and building plans for the ramp have been obtained.”

This is not the first time a class of LLUSM has sponsored a hospital, and it certainly won’t be the last. The LLUSM Class of 2010 sponsored an Adventist hospital in Haiti, providentially just before the devastating earthquake hit Haiti that year.

More recently, the LLUSM Class of 2017 is currently sponsoring the Chalala Adventist Hospital in Zambia. After seeing the effects of Ebola in an unstable and unprepared healthcare environment, the class chose a project that focuses on utilizing a new model for healthcare in developing countries.

“[W]e wanted to do our part in improving health outcomes in developing countries as a class,” the class collectively wrote on their project webpage. “Taking to mind the old adage ‘An ounce of prevention is worth a pound of cure,’ we decided to work with a project in a non-Ebola region to pre-emptively improve a health-care system before a crisis struck.”

More information on LLUSM class mission projects, including progress on Cooper Hospital and plans for the Chalala Mission Project, can be found here and here.