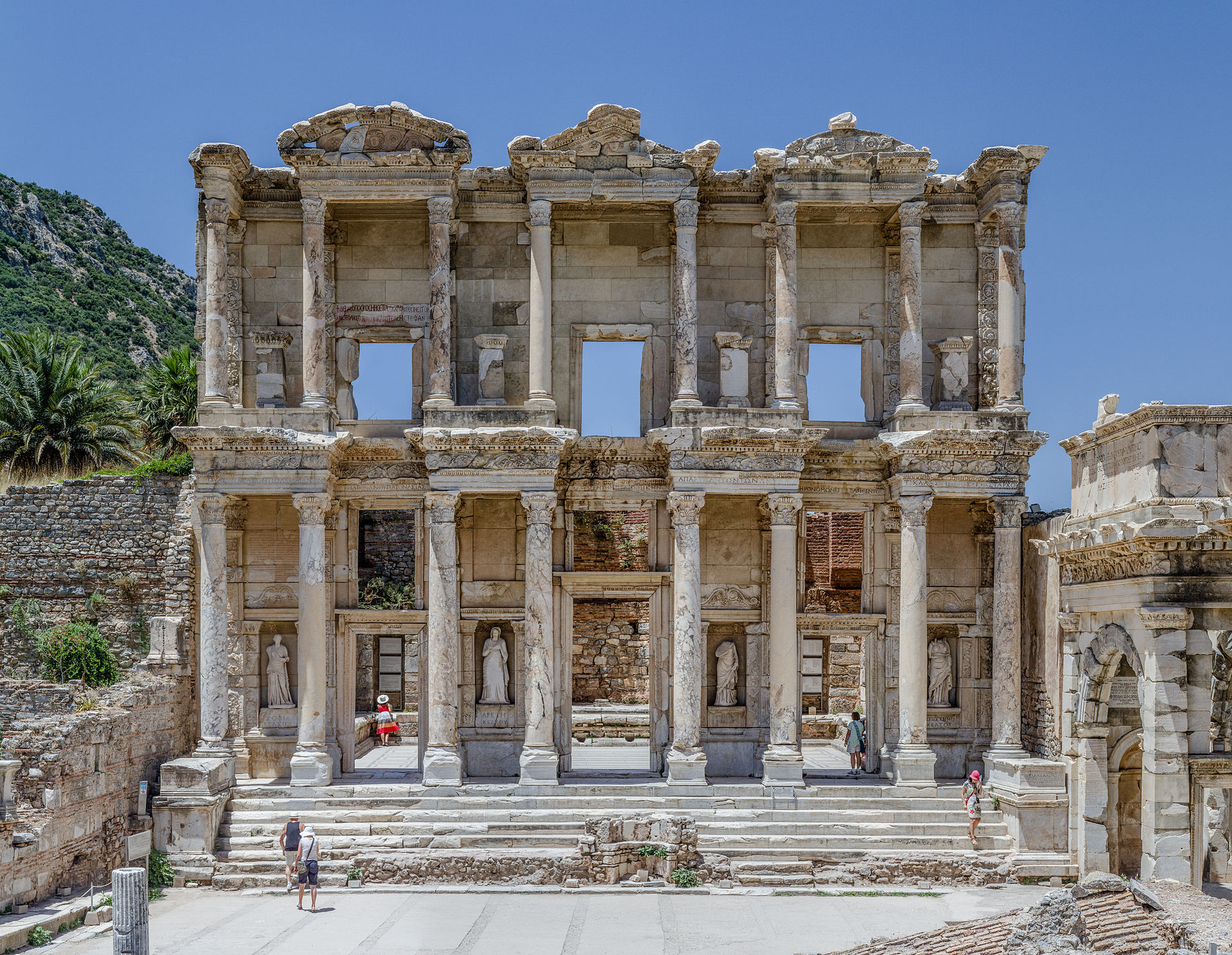 Over the last week I’ve been fortunate enough to have the opportunity to travel in the footsteps of Paul through Turkey and Greece – beginning in Izmir (Smyrna), we've visited Ephesus, Colossi, Laodicea, Philadelphia, Pergamum, Philippi, Thessalonica, Berea, and are now in Athens.

I’ve felt inspired by this trip, by Paul’s example, but also reflected on how weak the Adventist Church is in Greece today. There are lots of reasons for that, especially the local culture (as our local guide told us, if you’re Greek then you’re Orthodox – that’s just the way it is), but then I think about how our church is beginning to be affected by secularism back in the States. So what might Paul do? Surely he would say Adventist Christians should have a focus on evangelism.

But I wonder how many Spectrum readers would feel, reading that? Excited? Irritated? Alarmed? Bored? But all of those responses probably come from a distorted understanding of the meaning of two loaded words: “mission” and “evangelism.”

For many Adventists, the word “mission” probably prompts thoughts of missionaries, and that, in turn, conjures up images of white men, in white pith helmets, and khaki drills, cutting their way through thick forest with a machete, on their way to converting savages to the gospel and to Adventist health practices. Now, that picture have had some basis in reality, once, but today it’s rarely true even in areas that have jungles, such as Africa, Asia and Latin America. Even in the past, “mission” meant much more than that. Apart from anything else, the objects of missionaries included citizens of sophisticated civilizations, as well as primitive tribes in the naked jungle; and furthermore, mission for Adventists was never conducted only outside Christendom. Until 1964, one of the SDA Church’s departments was the Home Missions Department. Its name said something powerful: foreign missionary work is vital, for if those areas where the church is strong do not take responsibility for those where it is weak or non-existent, then the gospel will not be preached, as Christ commanded us to preach it, “in all the world”, “in every nation”, “unto the uttermost parts of the earth”. But as well as foreign missions, our homeland is also a mission field; and there is missionary work to be done in our neighbourhoods, as well as in what Ellen White often referred to as “the regions beyond”.

Ellen White made some very significant statements about home missions. Here is the first.

Many suppose that the missionary spirit, the qualification for missionarywork, is aspecial gift or endowment bestowed upon the ministers and afew members of the church and that all others are to be mere spectators”, inspired testimony tells us: “Never was there agreater mistake. Every true Christian will possess a missionaryspirit”. (T 5:385)

But thus far, you might feel we are begging an important question: What is mission? If mission is what the church is called to, and church members are to be missionaries, what does that entail?

The mission of all Christians is to make disciples of Jesus. This is also the explicit mission of the Seventh-day Adventist Church, according to its Mission Statement. But how do we make disciples? The usual answer is “evangelism.” But what, in turn, is evangelism? The root of this word in the Greek word for good news: evangelion. So evangelism, at the heart, is sharing the good news that God loves us enough that He gave himself for us, living here among us, dying and being raised to life again, and ministering for us in heaven, making us right with God, and thereby assuring us of eternal life. This really is good news and evangelism is the term for sharing it with all men and women, as Christ commanded us.

But when we say “evangelism”, I’d guess that most Adventists, think of a public evangelistic campaign. Typically, it has a guest speaker, an evangelist, who comes in specially: ideally he (and it usually is a “he” though increasingly there are women evangelists as well) is a high-profile speaker, with lots of previous success, and a supporting team that provide wonderful music, and impressive audio-visual effects. At some point those effects definitely will include graphics of statues and strange beasts, as described in the prophetic books of Daniel and Revelation. Then they move on and hopefully leave us with some converts who the local church will hopefully help to grow in Christ.

If this is evangelism, then we have a serious problem, since increasingly people in Western countries just don’t go to crusades. In particular, middle-class people born in this country—not just white people, but people of other ethnicities who have been raised here and have taken on the secular culture of this country—don’t attend evangelistic meetings. They just don’t go. In some parts of the country, evangelism still works—the South and the Midwest for example. But in the northeast of the United State, on the West Coast, and increasingly elsewhere, evangelism appeals only to an ever-shrinking section of the population.

But there are other problems, too, which reflect not the methods we use but our very concept, in practice, of evangelism. If what I just described is what “evangelism” is, then what is it? It is short-lived and episodic, occurring at intervals. It is done by outsiders and professionals, who are not involved in their community, but move from one campaign or crusade to the next—and it’s striking that we use those military terms, “campaign” and “crusade” for evangelism, because that is an insight into how we think about them.

I want to suggest that evangelism is much more than a prophecy chart, or an impressive video. Instead of something that is a one-off, that is temporary and done periodically, it should be a permanent part of our church life. And it is something to which every member of the body of Christ should contribute.

But before you stop reading: I’m not saying that everyone needs to preach an evangelistic sermon; or that everyone should put leaflets promoting public evangelism in mailboxes, or distribute them at malls; or that you need to do better at inviting people to attend prophecy-focused sermons that you know many of your friends will never attend, would be embarrassed by if they somehow did attend, all of which makes you deeply embarrassed even to invite them. I’m saying our entire concept of evangelism needs to shift.

Yes, public meetings may well be part of it, at some point, as a way to help move people to the point where they’ll make a decision. But evangelism is no longer just the meeting and the preliminary work of passing out leaflets and so on. Instead, a public meeting becomes just one potential facet of something much more sustained. As we move into this quarter in which the Sabbath School will be focused on the role of the church in the community, it is a good time to remind ourselves of two other statements by Ellen White: her second one about “home missionaries,” and a powerful one about the role of community outreach in mission/evangelism.

Ellen White wrote in the book Christian Education: “Everyonewho has seen the evidence and light of truth and accepts the truth, professing his faith in Jesus Christ, is a missionaryin the highest sense of the word. . . and it ishis duty to . . . diffuse that which he has received.”(CE 155)

Note: everyone who is a disciple of Jesus Christ should be a missionary; it is his and her duty to share the good news. So what Ellen White is telling us is that, in God’s plan, the person responsible for the mission of your local Seventh-day Adventist Church is not your pastor or your Conference evangelist or evangelism director: it’s you. But what can “I do?” I can’t preach a sermon, I feel terribly uncomfortable knocking on doors – and I know from when Jehovah’s Witnesses knock on my door that I’d probably be making my neighbors uncomfortable if I did go door to door!

The answer is in my final quotation from Ellen White, from the book Ministry of Healing:

Christ’s method alone [alone she states] will give true success in reaching the people. The Saviour mingled with men as one who desired their good. He showed His sympathy for them, ministered to their needs, and won their confidence. Then He bade them, ‘Follow Me.’ There is need of coming close to the people by personal effort. If less time were given to sermonizing, and more time were spent in personal ministry, greater results would be seen” (MH 143)

Here, I suspect, is the answer to the slowing growth of the SDA Church in North America; and maybe even, to some extent, in Greece. It is the model that Paul used as he went to great cities like Ephesus and Corinth, living there and (we are told) working there, for around two years in each place, instead of making quick passing evangelistic visits. It is a method anyone can be involved in, since it doesn’t require us to be able to preach powerful sermons; it just requires us to be friends to our neighbors, to spend time with them, to help meet their needs, and then, when the time is right, to tell them about Jesus. This is something we all can do. This is evangelism for the twenty-first century – it just so happens that it was also the evangelism of the first century.