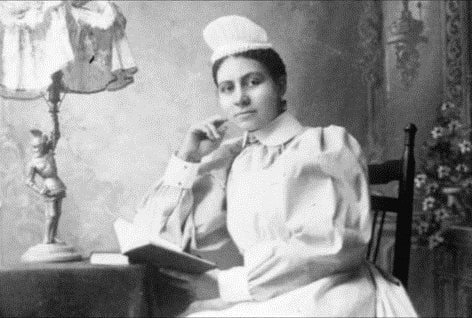 In The Free State of Jones: Mississippi’s Longest Civil War (Chapel Hill: University of North Carolina Press, 2001), historian Victoria Bynum contends that Anna Knight’s conversion to Adventism made her a more effective liberating influence in her Mississippi community than her father, Newton Knight, the white farmer whose rebellion against the Confederacy is dramatized in the recently-released film “The Free State of Jones.” Even more than his actions during the Civil War, Newton Knight’s support for equal rights after war, and his open relationships with black women made him a controversial, even despised figure among white Mississippians.

In addition to nine children with his white wife, Serena, Newton fathered five children with the former slave Rachel, contributing to development of a large mixed-race community in Jones County. In 1876 he deeded 160 acres of land to Rachel, making her one of the few black landholders in the state. He insisted on being buried next to her in defiance of segregation law. After Rachel’s death, Newton “took up” with her daughter, Georgeanne.

An offer of free reading material in a church-sponsored magazine started Georgeanne’s precocious daughter, Anna, on a path that led to Adventism, nurses’ training at the American Medical Missionary College in Battle Creek, Michigan, and then back to her impoverished Mississippi community where she started a school.

Bynum analyzes the significance of this trajectory in the remarkable context the Newton Knight saga: “Even had whites wanted to…those sympathetic to Newt could do little to change the prevailing norms of society that marked him as deviant. Much more important to the mixed-race community’s ability to thrive was Anna Knight, whose conversion to Seventh-Day Adventism first transformed her own life.” Adventism, says Bynum, gave Anna “the tools with which to educate and reform the habits of her kinfolk.”*

Bynum points out that Anna faced the likelihood of a life of frequent child-bearing outside of legal marriage like that of her mother and grandmother, whom whites regarded as prostitutes or concubines. Though Newt and Rachel’s relationship has been characterized as in reality a common-law marriage, a descendant recalled that Rachel’s death at the age of 49 was attributed to having had “too many babies.”

By leaving home to pursue an Adventist education, Anna “escaped rural Mississippi and gained protection against sexual exploitation and poverty within the nurturing environment of Seventh-day Adventism.” And when she returned to Jones County in 1898 “white men there were confronted by a dignified, educated missionary rather than a pretty and vulnerable woman whose ‘black blood’ made her sexual fair game.”

The racial ideals she found in Adventism were part of what drew her to the movement, though she soon experienced the accommodations the church made as segregation tightened its grip:

Adventists challenged both gender and racial barriers in their evangelical missions, particularly in the postbellum South but, like other institutions, were eventually forced to segregate their facilities. Anna remembered that when she joined, however ‘white and colored worshiped together.’ As the church’s black membership grew, so, too, did fierce opposition to race-mixing, often from within the church itself.

After leaving Mississippi to obtain an Adventist education, Anna had first enrolled in Graysville Academy near Chattanooga, Tennessee.  But when several parents of students protested Anna’s admission, L. Dyo Chambers and his wife, who were sponsoring her education, withdrew her from the school and arranged for private tutoring.

Alongside the undeniable reality of Adventism’s accommodation to segregation and the deeply-ingrained pattern of racial inequity that eventuated in the church, Bynum offers this portrayal of the transformative impact made by Anna Knight’s Adventism:

Under the auspices of the Seventh-Day Adventists, Anna not only taught the “three Rs” and Adventist theology in her Sunday school, but she also convinced her relatives to accept Adventist reforms in their diet, dress, and social behavior. Although she lived outside the Knight community most of her adult life, she influenced the community’s development more profoundly than did Newt Knight himself….

Because of the demands of Anna’s work as a teacher and a missionary, she educated her Sister Grace, who eventually replaced her as teacher of the school [in Gitano, founded in 1908 after Anna returned from pioneering mission service in India]. For most of her life Anna lived and worked at Oakwood College, which the Adventist Church founded for African Americans in 1896 in Huntsville, Alabama. Many mixed-race Knights received their grade school education from Grace and left the area to attend high school at Oakwood College. These two schools became their most important resources for battling against total debasement under increasingly strict racial segregation.

*All references are from the Kindle edition of Bynum’s book, Chapter 8, Locations 2118 through 2149. A “movie edition” of the book was published in January 2016. Information also derived from “Oakwoodites Connected to Hollywood Film,” Inside Oakwood email newsletter, June 22, 2016, and Richard Grant, “The True Story of the ‘Free State of Jones,’” Smithsonian Magazine online (March 2016).

Douglas Morgan is professor of History and Political Studies at Washington Adventist University. He writes at www.historyandhope.org.