The Reformation and the Remnant: The Reformers Speak to Today’s Church 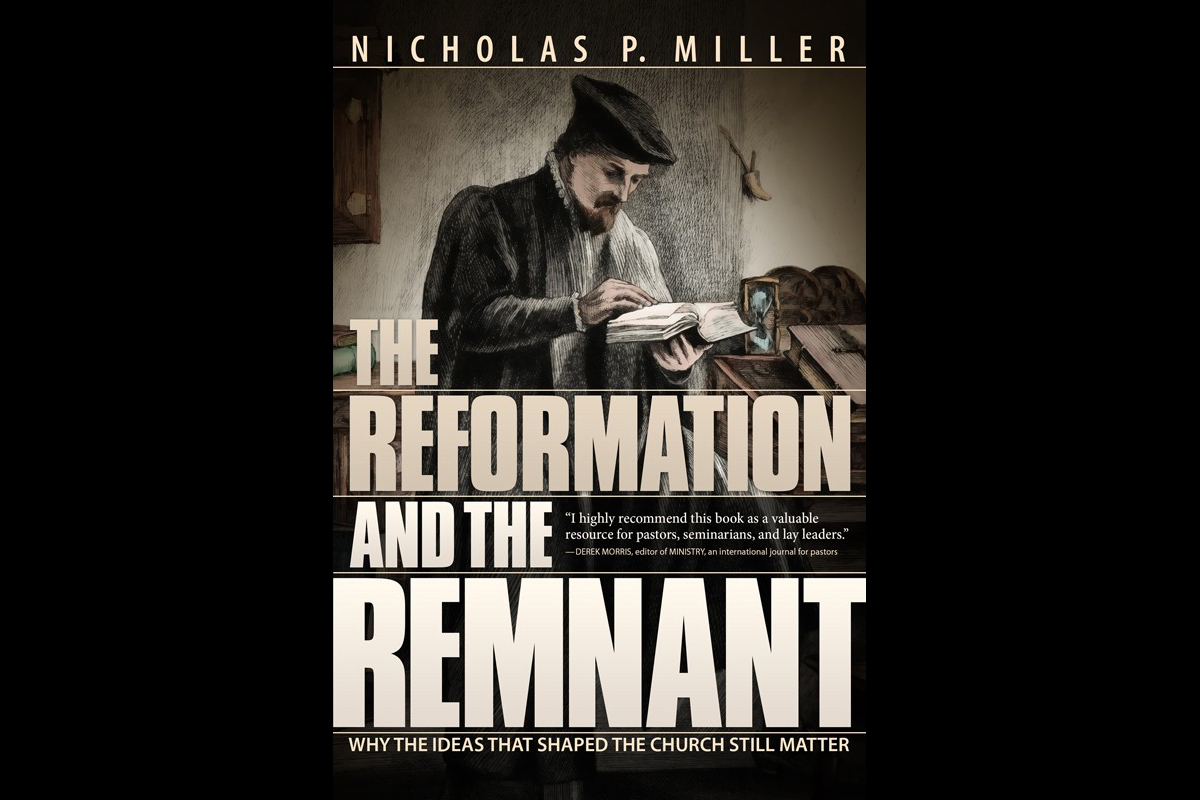 In this book lawyer and church historian Nicholas P. Miller, of the Seminary at Andrews University, addresses Adventism’s “identity crisis” by way of two rhetorical strategies.  One is to claim Reformation backing for the understanding of Adventist identity that he favors.  Another is to call his account “centrist” and to lump persons he differs with (none are named) into either the “liberal” or “fundamentalist” camp.

The result is both conventional and subversive.  Miller would strike some readers as quite nearly fundamentalist himself, yet he is clearly hoping to pry the church away from sheer rigidity and thoughtlessness so that it can embark upon a more creative course, one that is not only more flexible but also more biblically responsive.

Miller wrote a dissertation on the contribution of dissenting Protestants to the development of religious liberty.  It was published in 2012 under the title The Religious Roots of the First Amendment, and became a best-selling academic title from the Oxford University Press.  The Reformation and the Remnant aims for a narrower, Adventist readership, but Miller again shows himself to be at once clear and provocative.

In his Introduction, Miller says, more or less in passing, that the Reformers matter because we learn by listening to people not ourselves.  He quickly moves on to marking out the “third option” or “middle way” he links with the Adventist pioneers, including Ellen White, and contends for himself.  Here the theory of “verbal inerrancy” finds no support; here a “closed, self-righteous spirit” meets with criticism; here the church takes up an “activist stance” on social issues such as slavery and alcohol.

But after the 1919 Bible Conference the church, now lacking Ellen White and now fearful of “modernism” in religion, veered toward fundamentalism.  It became more comfortable with “verbal inspiration” and less open to change, and began withdrawing into “Southern fundamentalist social and political conservatism.”  Miller says most Adventists find this outlook—what he calls “the fundamentalist ditch”—tempting.  But since the 1970s, with the revelation that Ellen White’s writings were not, in fact, the “product of verbal inspiration,” another outlook has emerged, what he calls Adventist “liberalism.” Today it regards Scripture as “ultimately” a “human product,” with the result, Miller contends, that liberals are now “ready” to deny “literal” understandings of Creation, question penal substitutionary atonement theory, welcome same-sex marriage and “jettison our view of the last days.”  This dubious strain, both small and dangerous, has in this book no named representatives, but Miller, painting with a broad brush, says that it “tends to be restricted to academic institutions and large, urban churches.”

Chapter One invokes both Luther and Wesley in describing the place of scripture in Christian life.  Jesus Christ, as Miller allows, is “the ultimate Word of God,” but what Jesus stood for is “consistent with” scripture, so the Bible itself may be thought of as the church’s “sole infallible authority.”  Miller does introduce nuance, however, with his affirmation of the “Wesleylan quadrilateral.”  Besides Scripture, reason, experience and tradition come into play, and all four of these matter.  Scripture “only” would make no sense.  Reason, experience and tradition are part of human culture.  They inevitably shape our thinking, and may each generate, as Ellen White herself would agree, both insight and value.  But if it’s important to grant all this, it’s equally important, Miller insists, to think of Scripture as the church’s “normative norm.”

Ten more chapters follow. One on the Great Controversy appeals to the lesser-known Dutch reformers Arminius and Hugo Grotius in defending free will and backing up the case for God as a “moral” governor whose “fairness” all “created beings” will come to agree upon.  Another chapter defends the “literal” heavenly sanctuary as the administrative hub of God’s moral government of love and argues for the “legal” necessity of penal substitutionary atonement. Still another espouses “literal, six-day Creation,” invoking Ellen White against “‘delusive, scientific theories’” that would, Miller says, count against God’s “character of love.”  But this chapter does echo the book’s two-“ditches” theme: if the liberal “quicksand” of elevating science over scripture is dangerous, so is the fundamentalist preoccupation with creedal formulas.  This latter can distract people away from the “meanings” of creation, or even, as happened in both South Africa and the American South, underwrite “static” views of creation that buttress the “established” social order.

Chapters five and six argue that the direction of American policy on sexual orientation and the nature of the family constitutes a threat to the country’s “system of moral pluralism.”  Miller repeatedly comes across as favoring social activism, but he affirms traditional sexual values and says the political Left wants to suppress “elements of the church’s morality and practice that conflict with secularist values.” Still, he opposes discrimination against gays and lesbians and is open to “civil unions for tax and insurance purposes.” Having said that, however, Miller maintains that today’s questioning of marriage as between a man and a woman amounts to an “end-time attack” on the “heart of God’s law.”

Then come two chapters that may surprise.  One argues for the ordination of women.  Miller’s point is not to hurry the practice into worldwide church policy but to grant that, excepting actual “deviations” from divine law, the Holy Spirit does allow adaptation to circumstances for the sake of mission.  There are even “good reasons to avoid rigidity and coercion” in the enforcement of the conservative policy enacted at the 2015 San Antonio General Conference session.  After this, Miller’s next chapter offers an argument for what he calls “positive ecumenism,” citing abolition and temperance as examples of pioneer cooperation with other Christians.

Chapter nine is a deeply conventional apology for Adventism’s end-time Sunday-law scenario.  Here Miller appeals to the seventeenth-century Seventh-day Baptist Thomas Tillam, who located the Sabbath at the heart of what he called “‘the last great controversy.’”  But in what may confound expectation, Miller in chapter ten severely rebukes those right-wing Adventists who advance conspiracy theories involving Jesuits and Masons and the like. And finally, in chapter eleven, he lashes out against the vision of “sinless perfection” associated with “last-generation theology.”  Holiness matters, Miller declares; legalism and indifference to social concern make a mockery of holiness.

As is clear by now, in addressing Adventism this book addresses a community stamped by turbulent diversity.  Saluting that fact in his concluding remarks, Miller harks back to his ordination chapter and says that religious liberty is about “relationships within the church” as well as outside of it.  There “must be space in the church for disagreement on certain matters.”  The last phrase, “on certain matters,” implies limits, however, on allowable domains of disagreement.

The two rhetorical strategies I mentioned to begin—the Reformation is with me; my position is, within Adventist life, the centrist one—suggest what Miller may be ruling out.  Both occupy the reader in such a way as to keep modernity at bay.   If the only post-Reformation thinkers you consider sympathetically are Adventists who overlook or dismiss modern intellectual developments, you have shied away from a major source of “crisis” for Adventist identity.  Today a new “circumstance”—Miller uses this word in his argument on women’s ordination—is scientific consensus that people do not “choose” their sexual orientation.  Another is that human life is vastly older than we used to think.  Still another is that secular criticism of all religion seems to be gaining traction.

You can try to sidestep genuine engagement with such developments.  You can even try to institutionalize (as in, for example, our schools) refusal to talk about them.  But no self-constructed cocoon will perfectly enclose our children, nor even our friends who are adults.  Despite what we may do or hope for, they come under the modern culture’s influence.  Some may even elect to become scientists, and feel the shock that goes along with that.  One way or another, whether in their universities, workplaces or social interactions, all will seek out, or stumble into, wider-ranging conversation than the cocoon provides.  It is self-deception to think otherwise.

Miller’s “centrist” vision, at least as articulated in his book, protects this self-deception.  It does, I think, subvert far-right madness in Adventism, not least because the author makes lengthy critiques of it. But in his determination to show no sympathy for those Adventists he calls “liberal,” he offers verbal swipes without really considering the nuance, the biblicism and the deeply-felt conviction that comes through in at least some of what they say or write.  Nor does he engage—I mean grapple with—the intellectual context that calls forth these efforts.

Meanwhile, the cocoon will go on failing to keep modernity at bay.

SEE ALSO: Phillip Brantley's Review of The Reformation and the Remnant.