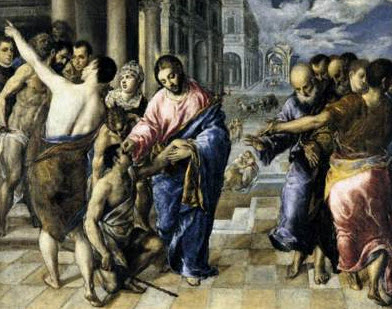 Even before my daughter was born, one of my favorite things to do was to come home at the end of the day and read her a Bible story. Now I will admit it was probably a little strange to start that tradition before my daughter was born, but story time was and continues to be one of the more nonnegotiable parts of my day. I found a Bible story app on my phone and we have been telling her the common Bible stories that Christian children come to know when they’re young. It’s been an unexpected joy to reconnect with some of these stories, and look at them through the eyes of someone in his mid-thirties. I also like to add running commentary to the stories, adding my opinions and occasionally fixing some factual errors (the app is not very good).

This week I read the story of the ten lepers. I recounted the well-worn tale of the ten lepers, how they pleaded for Jesus to heal them as Jesus and the disciples passed through from Samaria to Galilee. I told my daughter about how Jesus healed them in a weird way – by telling them simply to go show themselves to the priest. While on their way to the priest, the lepers found themselves healed. Only the Samaritan turned back to thank the Man who healed them. I was taken aback at Jesus’ response, “Were there not ten cleansed? But the nine—where are they? Was no one found who returned to give glory to God, except this foreigner?” I stopped the story and said to my child, “Sometimes the unrighteous do righteousness better than the righteous.”

As I thought about that story over the last couple of days, some other thoughts came to my mind. I am not as sure as I was a couple of days ago that I can give the Samaritan too much credit for returning to Jesus. After all as a Samaritan, the priests he was running to were in all likelihood not his priests. In fact, from what we know about the relationship between Jews and Samaritans, it is most likely that he would have been rejected on sight at the temple. (How interesting it is then that as a leper he was in a group with Jews. It is amazing how cultural walls break down when faced with ostracism.) There was no other place for that Samaritan to run other than back to Jesus.

This does not necessarily excuse, however, the Jews who did not realize the importance of giving thanks to the One who was God even of the priests to whom they were running. Over my own small objection, it is true that the most “unrighteous” of that group of lepers was still the only one who found his way back to give thanks for what Jesus did. In return, Jesus publicly, before his Jewish disciples, exalts this foreigner and castigates those of his own culture who did not do as this foreigner had done. Over the last couple of days I have thought of all the other ways that the people Christians (and Adventists) look down on as heathen and ungodly have managed to do the right thing while my denomination still lags behind. My church is still segregated, while society is not. My church still treats women called by God as somehow inferior, while my society does not.[1]And to let some Christians tell it, the fact that society has addressed these inequities is a sign that it has fallen away from what God wants, instead of what I believe it truly is – that the church has allowed the world to show it the way of righteousness instead of the other way around.

Jason Hines is an attorney with a doctorate in Religion, Politics, and Society from the J.M. Dawson Institute of Church-State Studies at Baylor University. He is also an assistant professor at Adventist University of Health Sciences. He blogs about religious liberty and other issues at www.TheHinesight.Blogspot.com.