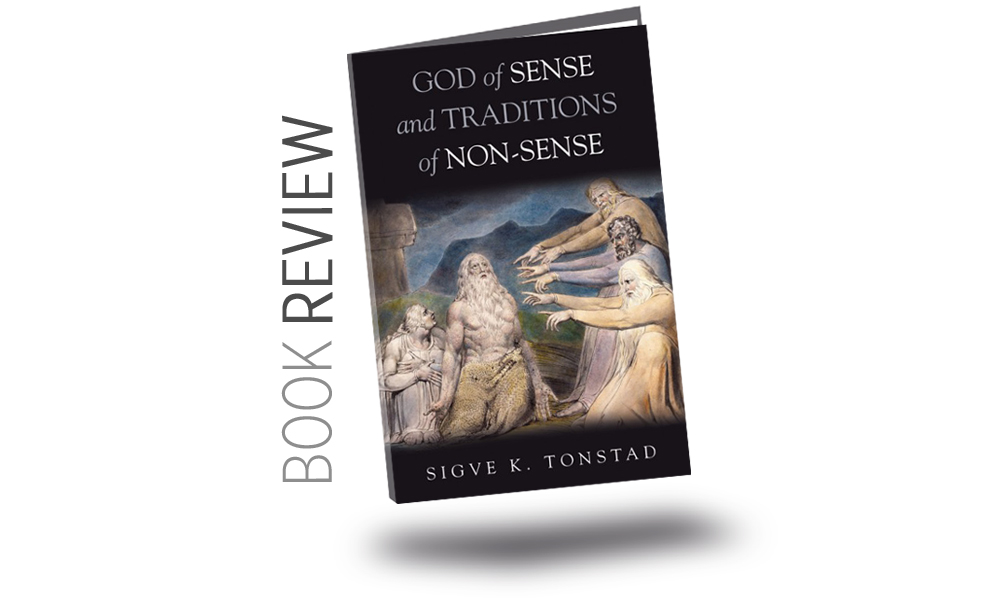 As the title suggests, in his book, God’s Problem: How The Bible Fails to Answer Our Most Important Question – Why We Suffer, Bart Ehrman argues that the Bible has nothing compelling to say about the problem of evil. Well, I just put down a beautifully written four-hundred and fifty page book that compellingly argues the exact opposite.

In God of Sense and Traditions of Non-Sense, Sigve Tonstad argues that the Bible is from beginning to end oriented around the question of why God does not intervene to prevent suffering. And the answer the Bible provides, he argues, is as beautiful as it is compelling. Unfortunately, this answer has been largely buried under theological “traditions of non-sense.”

Tonstad fleshes out aspects of the sensible answer that the Bible provides to the problem of evil by masterfully retelling key Bible stories while weaving in other literary and philosophical material. While I cannot begin to capture the richness and highly nuanced nature of Tonstad’s arguments, I’ll briefly outline four general aspects of the answer he finds in Scripture.

First, Tonstad reviews biblical stories that make it clear that biblical authors didn’t assume that God’s character and will were inscrutable. For example, the story of Abraham debating God about the justice of destroying Sodom and Gomorrah (Gen 18) presupposes that God’s sense of “justice” is congruous with our sense of “justice.” This perspective strongly contrasts with a theological tradition that dates back to Augustine and that holds that God’s morality is altogether different from ours and is therefore inscrutable. For example, theologians like Augustine, Luther and Calvin held that we must affirm that God is loving and altogether good, despite the fact that he predestined the majority of humans to eternally suffer in hell. There is no denying that God’s “love” and “goodness” are inscrutable (if not completely meaningless) in this view, but, according to Tonstad, this simply confirms that this view of God is not biblical and that this tradition is a “tradition of non-sense.”

Another closely related aspect of the sensible answer the Bible provides to the problem of evil concerns freedom. Tonstad does a great job demonstrating that the God of the Bible is a lover of freedom, for freedom is the premise of love, which is the ultimate goal of creation. For this reason, God governs the world not by coercion, but by means of loving influence. This was the uniform view of the early church, but as Tonstad powerfully demonstrates, this changed quite suddenly once the church assumed a role in running the state in the fourth and fifth century, for running a state requires the use of coercive power. It’s no coincidence that Augustine, who was the first to justify Christians using torture to coerce professions of faith, was also the first to defend the view that God coercively controls everything.

On this note, one of my favorite sections of this book was Tonstad’s brilliant analysis of “The Grand Inquisitor” in Theodore Dostoevsky’s The Brothers Karamazov. This is a “poem” that Ivan Karamazov, who is an atheist, tells his brother Aloysha, who is a priest. The setting for this poem is Spain at the height of the Inquisition, when untold numbers of non-Christians and heretics were tortured and executed by the Church. Jesus suddenly appears amidst this horror, and everyone recognizes who he is. But the elderly man who is heading up the Inquisition has him arrested to interrogate him.

In the course of this interrogation it becomes clear that the Church of Christendom, as represented by the Grand Inquisitor, is opposed to Jesus because this Church wants to offer people a different kind of freedom than what Jesus offered. Tonstad summarizes this poem by saying,

Jesus empowers individual choice, freedom of conscience, and personal responsibility. The Church, as Ivan’s poem envisions it, offers humans the freedom not to decide for oneself. In a curious sense, the Church offers to take away from the individual precisely the freedom that Jesus extends to each person (p.330).

Tonstad makes the case that God has always been on the side of empowering people to make morally responsible choices while Satan has always been on the side of trying to control people, thereby giving them the freedom not to have to make morally responsible decisions. And he does an excellent job demonstrating that this battle has been waged not only throughout Church history, but also throughout the biblical narrative.

This brings me to the third aspect of the sensible answer the Bible provides to the problem of evil, according to Tonstad. It is the aspect that is the hardest to accept, but Tonstad correctly argues that it is absolutely indispensible for a proper understanding of Scripture as well as for an adequate theodicy. Throughout the biblical narrative, but especially in the New Testament, biblical authors reflect an awareness that our world is engulfed in a cosmic conflict, headed up by God, on the one side, and Satan, on the other. Tonstad makes an overwhelmingly compelling case that this conflict is a fundamental aspect of the biblical narrative and that this narrative cannot be properly understood if this conflict is neglected.

By contrast, while the Church has always affirmed the reality of Satan, his significance was completely undermined in the “tradition of non-sense” that conceived of God preordaining everything. Of course, theologians within this tradition have always claimed that Satan is significant, for God ordains what Satan does in such a way that Satan remains morally responsible for the evil that God ordained him to bring about. But this traditional perspective simply demonstrates why Tonstad is correct in labeling it a “tradition of non-sense.”

The fourth and final aspect of the biblical answer to the problem of suffering that I’ll discuss concerns the character of God and the deceptiveness of Satan. Tonstad stresses the importance of the fact that the serpent beguiled Adam and Eve by engaging in a character assassination of God (Gen 3:1-5). Rather than being a lover of freedom, the serpent suggests that God inhibits freedom and rules by manipulation. He is a God who can be feared, but never loved, which is why Adam and Eve feel the need to hide from him when he shows up after their rebellion. And, not surprisingly, this is how people have tended to view God or the gods throughout history. According to Tonstad, the entire biblical story, from Genesis to Revelation, should be read as God’s response to the serpent’s accusation.

The centerpiece of God’s response, of course, is Jesus Christ. In Christ, and especially in his self-sacrificial death, God reveals that he is nothing like the fearful manipulative monster that Satan has always deceived people into thinking he was. He is rather a humble God of self-sacrificial love who honors people’s free will to the point of allowing them to crucify him. And in doing this, God exposes Satan to be the deceiver that he is. But, true to his character, even this revelation is not something God forces on anyone. There is enough light for anyone who wants to see the truth, but enough ambiguity so that no one is forced to see the truth.

There is, in my opinion, only one shortcoming of this otherwise superb book. While Tonstad was usually surprisingly good at demonstrating how the biblical stories that he addressed make sense, at certain points I think he could be charged with whitewashing the biblical material. To illustrate, his extensive treatments of Moses and Elijah are full of insights, but Tonstad never addressed the darker side of these individuals. For example, what sense can be made of Moses’ instructions to slaughter all the Midianites except the virgin women, whom his soldiers could keep as spoils of war (Num 31:15-18)? And what are we to make of Elijah’s decision to slaughter the four hundred priests of Baal after he had beaten them in a spiritual contest on Mount Carmel (I Kg 18:40)?

Related to this, Tonstad never addressed the many Old Testament narratives that depict God in ways that don’t make sense and that seem to blatantly contradict the revelation of God in the crucified Christ. For example, what sense can be made of the portrait of Yahweh commanding his people to mercilessly slaughter every man, woman, child, infant and animal in certain regions of Canaan (e.g. Deut 20:14-20)? Or what sense can be made of the portraits of God causing parents to cannibalize their children (Lev 26:28-29; Jer 19:7, 9; Lam 2:20; Ezek 5:9-10) or ruthlessly smashing parents and children together (Jer 13:14)? I think Tonstrad’s work would have been strengthened had he not bypassed this material.

This omission notwithstanding, this is a superb book that is well worth reading. In fact, it is so packed with rich exegetical, literary, philosophical, and sociological insights that this review frankly feels rather paltry. I suppose this is inevitable for any review of a book that is this rich in content.

Greg Boyd is co-founder of Woodland Hills Church in St. Paul, Minnesota where he serves as Senior Pastor. He is an internationally recognized theologian, preacher, teacher, apologist and author. His website, Re|KNEW is where this review first appeared. It is published here with the author's permission. Boyd will also be the keynote speaker at the 2016 Adventist Forum Conference.