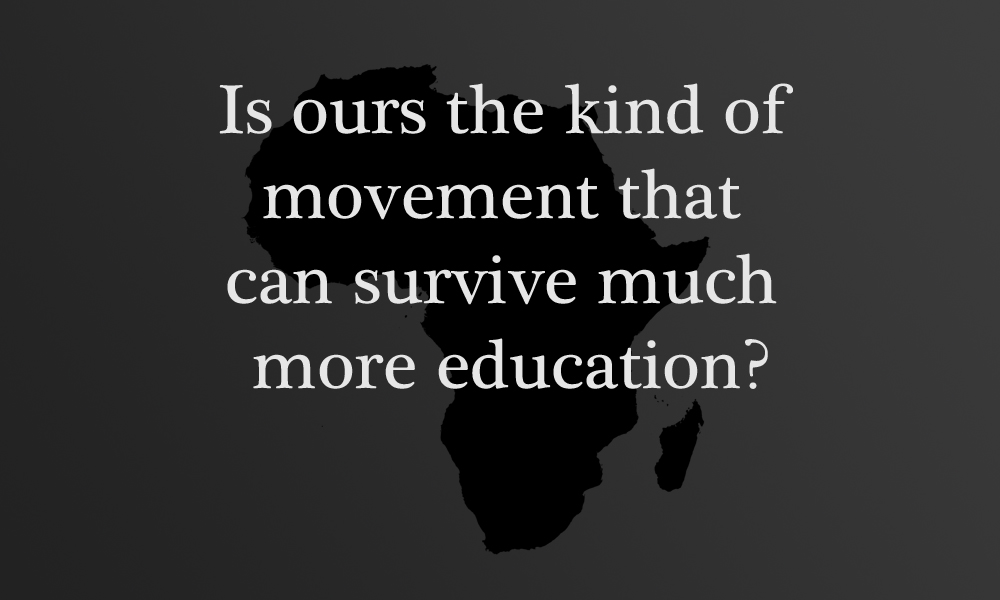 Lately independent Adventist media has been abuzz with stories of a church leader in the Southern African and Indian Ocean Division office whose academic degrees turned out to be unsubstantiable. The responses to this revelation have been, it seems to me, unnecessarily scathing, as though the church has been irreparably damaged by this one man claiming degrees he didn’t have.

I am not an insider, so I’m hesitant to judge. At first glance, it certainly appears to be an honesty issue. Some have said, “It’s too bad he made a mistake and now everyone is blowing it out of proportion.” If what is alleged is true, it’s not a mistake. You don’t go in search of “credentials” like that without knowing precisely what you are doing. If he tried to take credit he didn’t earn and used these credentials to climb into positions of greater trust, it is deception.

(An aside: let’s not tolerate the “I made a mistake” excuse, much beloved by politicians and businessmen when they get caught. A mistake is a misstep of small consequence, like blurting out something you wish you hadn’t, or turning left when you meant to turn right. Setting up a system to write deceptive loans for millions of homeowners may have had consequences you didn’t foresee, but it wasn’t a mistake. Slapping your coworker on the bottom or texting her a picture of your genitalia shows appallingly poor judgment, and you can’t label it a mistake. Nor are making laws that support your campaign contributors at the expense of the rest of us, or starting an unnecessary war in which hundreds of thousands of civilians die, mere mistakes. “Mistake” is a way to sound vaguely apologetic without admitting you were stupid or selfish or both.)

On the other hand, I hesitate to declare this alleged degree-poacher an absolute scoundrel, as some have done. I don’t know the man, but I suspect that through his life he has preached good sermons, prayed sincere prayers, lifted up the fallen when he had a chance, and baptized many. Someone commented that he should return all the compensation he’s received from the church through the years. That seems to me extreme. A lot of us pastors would have to return salary on the grounds of productivity alone, not to mention private reservations we might have about parts of the Adventist message which could, conceivably, also be labeled dishonesty.

Still, it’s an embarrassment. Yet, as Donald Trump has shown, the world has an astonishing willingness to forgive audacity. Danny Shelton came back and Samuel Pipim is coming back, forgiven by those of the faithful who hate to see their heroes fall. I find myself grudgingly impressed by the sheer chutzpah of people who can keep up the pretence even as their story unravels.

I’ve been, like everyone else, thinking of this story mostly in terms of personal integrity, until I came upon a comment from one of my friends that went something like this: “It makes me wonder what is the purpose of education in ministry and church leadership.”

Here is something we need to talk about. Integrity is the immediate discussion. The harder, follow-up discussion starts here: why are leaders seeking these degrees? (SID president Paul Ratsara claims several, as well, though there’s also controversy about them.) What makes these inessential, if not superfluous; degrees so valuable that one would be willing to risk one’s whole reputation to claim one?

The Seventh-day Adventist church has attempted to keep a nearly-flat compensation structure within fields, regardless of the size of congregations. That’s good for me, a pastor who’s in a district of small churches. But human beings are naturally competitive. And if you can’t make more money, you might instead aspire to power and security and recognition. In the Adventist church, that means leaving parish ministry for church administration. Sometimes advanced degrees facilitate promotions up into the church leadership world. And, while there aren’t dramatic differences in pastoral compensation, there are sweet perks for being in an office as opposed to a parish.[1]

In this case, it may also have to do with the desire of the developing world church to be recognized. Education is for learning, but a pile of degrees is for respect. Africa is the fastest growing region of our denomination. Most of what we’re proud of in church growth happens there. Yet who runs our church? Our denominational president is as white as a parsnip. And he does have a Ph.D. Others in Silver Spring boast of D.Min.s and other degrees. Doesn’t it make sense that leaders in Africa, arguably the heart of world Adventism, would find a few more degrees might facilitate their climb up the ladder, too? (In fact, the principal in this story was on his way to Silver Spring when questions were raised.)

I don’t know how one would manage to earn multiple doctoral degrees while working full time. I surely couldn’t do it—but then I’m clearly not world division officer material. But if the SID accusations are true (and I’m not that interested anymore in digging into it to find out for sure) what happened didn’t earn any respect. What it did do was reinforce a stereotype of Africa that we’ve formed from its political history as a place where the powerful get ahead, not necessarily by honest means.

I think there’s a another discussion here, though, that we probably should have. In my lifetime we’ve seen a push for Seventh-day Adventist pastors to get more academic education. When I was a child, many pastors went to work with a bachelor’s degree. Mine was the first generation in which a Master of Divinity degree was common.[2] And an increasing number of pastors are becoming Doctors of Ministry, not to mention church administrators seeking Ph.D.s in leadership.

I know what education means to a physician, an engineer, a research scientist. It’s not nearly as clear that it means the same thing in a profession where instinct and talent are as important—or more important—than degrees.

Here, an admission: Though I have a Doctor of Ministry degree (from an accredited institution), I know pastors with only a high school education who please their congregations more than I do mine. I know pastors who have moved sideways in midlife from another occupation, with no ministerial training, but are unquestionably better at many parts of ministry than I am. I once had a colleague who could barely read who could captivate an audience like I can’t hope to. I know pastors now in top leadership positions who didn’t bother with seminary. These men (still, mostly men) are gifted in ways I won’t ever be, a D.Min. notwithstanding. (I only ask that you don’t tell this to my conference president, though I think he may already have his suspicions about me.)

As we think about those SID vanity degrees, I think it’s legitimate to raise questions about ministerial training in the church generally, particularly in light of our latest theological revanchism. Our denominational president and others seem to be pining for a return to our 19th century church, or some fundamentalist variation upon it. We often hear how scholarly the church pioneers were, and I have no doubt that’s true. But they were autodidacts, for the most part. We credit Ellen White with being so articulate with so little education, and indeed, she was remarkable. But saying that also admits that academic degrees weren’t necessary when our movement started.

And I wonder if we really find ministerial education valuable now. Or, for that matter, whether it’s working for us.

It seems to me that what really matters to most Seventh-day Adventist congregations isn’t education. It’s qualities like warmth, charisma, trustworthiness, availability, communication skills, and just enough (but not too much) polish. I have never had a church ask me, “Can you translate those middle chapters of Daniel from the Aramaic?” No one has even asked if I could read Greek. I have had them ask me whether I visit my members, or how I relate to teens, or what I like to preach about.

Those in the church’s academic ghettos will say that where they attend church (if, in fact, they attend at all) they need an educated pastor. But in our denomination the college and university churches are the minority. Away from them, it’s another Adventist world. We’re still part of a 19th century movement, whose leaders are trying to keep us from going off the historical rails. They don’t want us to become liberal and open-minded, for some good reasons. They’d prefer we were more like the church of a century ago. And many offering-giving church members feel the same way.

Personally, I love education. I’m curious; I’m a reader and a writer. I was the kind of student for whom liberal arts were a great blessing. But given the theological climate across much of the world field, the conference leaders who say, “All our pastors need is a good personality, a wife, and a soul-winning course from Mission College of Evangelism” might have a point. Regions that have hired such pastors, like Michigan, are doing fine. There are other parts of the country where pastoral education has gone up and church attendance has gone down. One can’t draw a conclusion from that—there are many reasons church participation has declined—but neither have better educated pastors halted that slide.

Education is a wonderful thing. But it makes people ask questions. It raises doubts. Church leaders are worried about orthodoxy, as they should be. We’ve waited 175 years for Jesus to return, a delay we aren’t explaining very effectively. Our message is looking threadbare to an educated middle-class here in North America, who used to be our core constituency. Would we be better off, perhaps, abandoning efforts at theological modernization and staying very near to our 19th century roots?

You will have guessed that I’m being intentionally provocative, but I’m nonetheless raising a fundamental question about who we are. Do we want to be what our education is making us? Is it helping us to succeed? We have already decided that we won’t tolerate educated biologists and paleontologists who challenge us. Do we want pastors and scholars who question and reinterpret some of our more troublesome doctrines?

I’m just wondering if we’re the kind of movement that can survive much more education.

[1]As I’ve written elsewhere, pastors in church administration in the NAD get a higher mileage budget, all computer and office needs taken care of, automatic office jobs for spouses, and an enormous amount of free travel. And if you work in a union or above, you can count on getting every cost of living increase, which local conferences rarely keep up with for their workers. I suspect the same is true in other world fields.

[2]I seem to remember some talk of a policy that every pastor must have an M.Div. If so, it’s selectively ignored.