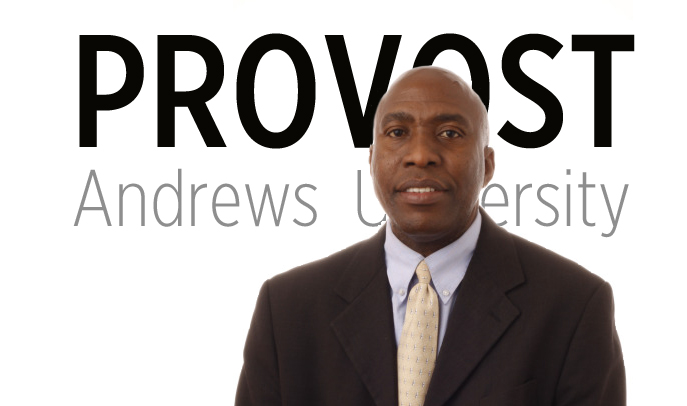 Current Andrews University provost and president-elect Andrea Luxton has written the following letter to announce her replacement in the provost's office:

Christon will replace me as I begin my new role as the next president of Andrews University on July 1, 2016. Prior to becoming provost-elect, Christon has served as dean of the Andrews University School of Graduate Studies & Research since 2010. In addition to that role, he has also served as associate provost, with responsibilities for faculty policy and faculty development, since 2012.

Prior to coming to Andrews University, Christon served as an associate dean and associate professor within the College of Education at Tennessee State University, and also as an acting and interim department head of education administration there. In addition, Christon has worked as an elementary and secondary teacher, and as department head of arts and general studies in Grenada. He holds a bachelor’s degree in theology from Caribbean University College (now University of the Southern Caribbean), and MA, EdS and PhD degrees in education from Andrews University, and has completed postgraduate training at Harvard University’s Institute for Management and Leadership in Education.

The selection of Christon as provost was guided by the work of an internal Provost Search Committee, which I chaired. The committee was made up of Board of Trustees, faculty, staff and student representatives, and began meeting in March 2016. Following a review of applicants, the committee selected three accomplished finalists, including two candidates who are currently part of the Andrews community, and one off-campus candidate who had previously been an Andrews faculty member.

Those finalists met and were interviewed by a variety of campus faculty and staff groups, with recommendations made to the Search Committee, which made its choice and recommendation to the Andrews University Board of Trustees. The Board formally confirmed the selection of Christon as provost-elect in a telephone conference call on Wednesday, May 11, and electronically mailed ratification votes of their decision over the next 24 hours.

As our search committee reviewed the potential candidates for provost, some of the most-used descriptors for Christon referred to his spiritual leadership, vision, collaborative teamwork and his focus on student success and mentoring. Under Christon’s leadership the graduate culture at Andrews has been transformed and he has also introduced a range of initiatives for faculty and students that have been both innovative and forward-thinking and have helped move Andrews University toward a future of strength and success.

Personally, it’s been a privilege to work alongside Christon over the last five years as graduate dean and, more recently, as associate provost. I now look forward to the strength, passion and vision he’ll bring as the next provost of Andrews University.

Christon has this to say about his new appointment:

"I see the role of the provost as giving one’s best advice to the president, and providing academic leadership to help ensure that academic programs and processes are known for their excellence and academic rigor. An Andrews education is a whole-person endeavor that needs to add value to every dimension of students’ lives—body, mind and spirit—within the classrooms, but also where they pray, live and play."

Christon will assume the post of provost on July 1, 2016, when I begin my term as the sixth president of Andrews University. The formal plan to replace the dean of the School of Graduate Studies & Research will be announced at a later date.

Please join me in congratulating Christon Arthur on this new appointment.