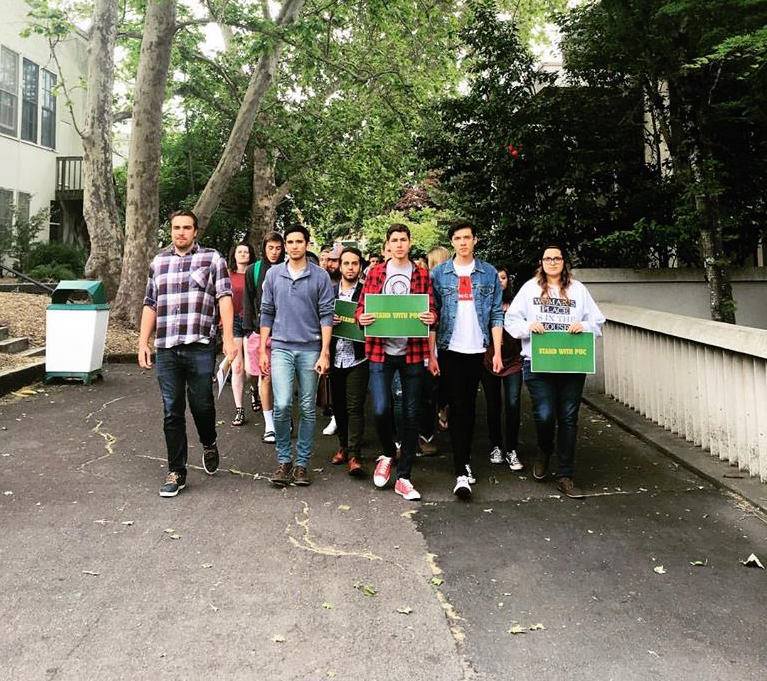 A student demonstration made its way across the campus at Pacific Union College today ending at the President’s Office where President Heather Knight met with the students. She praised them for their peaceful march and prayed with them for the college. The students were responding to the resignations of several faculty members in the Department of Psychology and Social Work and requesting more open communication between the administration and the student body.

Tuesday night, a group of students sent out the following message to peers:

As students of PUC it has come to our attention that Administration has not been transparent about the issues in the Psych/SW Department. We want our voices to be heard in an open dialogue with Administration. Meet at Alice Holst in Stauffer at 11:30 a.m., and we will walk together to Dr. Knight’s office to PEACEFULLY request a Town Hall. Send to 10 friends at PUC.

The student movement adopted the hashtag #FreePUC and corresponding website FreePUC.info. The site listed several objectives that students brought before college administration. J.J. Reynolds (pictured below left in plaid) presented the list to President Knight on behalf of the students. The president set a town hall meeting for 8:00 Thursday evening at the college’s Scales Chapel to answer student questions.

In an image from the Free PUC website, students march on the campus of Pacific Union College.

Meanwhile negotiations continue between representatives for PUC and psychology professor Aubyn Fulton, whose stance on academic freedom set in motion the actions by the other faculty members and students.

Fulton announced on April 28 through a Facebook post that he received notification he would be fired at the end of Spring Quarter. His impending exit follows a string of related faculty departures. Of the 6.5 faculty members who comprised the Psychology and Social Work Department two years ago, four have left or are leaving because of institutional policies and actions perceived to be inconsistent with academic freedom. Fulton will be the fifth.

In January 2014, Monte Butler announced his resignation from the department and his acceptance of a position at  Loma Linda University’s School of Behavioral Health. Bruce Bainum was the next professor to leave the department.

On April 6 of this year, Fiona Bullock resigned as BSW Program Director and Associate Professor of Social Work in protest and stated her support of Fulton. Bullock wrote on her Facebook page “the lack of compatibility between Academic Freedom and my ability to teach the social work values of diversity, compassion, inclusion, and acceptance as outlined by NASW and CSWE is at the heart of it.”

Charlene Bainum also announced her departure in April. In a letter to college administration also posted to Facebook, she said, “This administration’s efforts to silence, control, and then terminate this professor are in direct contradiction to PUC’s mission statement, and make it impossible to maintain the high educational standards that our students expect and deserve. I am obligated to speak out in protest at this grave injustice that has resulted in the dismantling and destruction of the Psychology and Social Work Department.” At the Western Psychology Association meeting in Long Beach last week, professors, alumni, and students gathered to honor Bainum. Many filled Facebook with photos, appreciative comments, and with discussion of Fulton’s situation.

Early in the school year, Fulton got into an academic freedom dispute with President Knight when he invited Ryan Bell, an alum of the college who has become a noted figure in atheist circles after a very public “year without God,” to speak at a colloquium class for departmental majors. The president intervened and uninvited Bell prompting Fulton’s charges of academic freedom violation.

The October squabble led to threats of possible firing of Fulton, but no action was taken. As the calendar year came to an end students of Fulton were requesting his assistance on long-term projects, so he sought guidance from the administration on its plans for his future employment. He did not find the administration’s silence reassuring. And by the beginning of the current spring quarter, he had pretty good information that the president did intend to fire him. According to one of his friends, he went to the administration and asked that some sort of settlement be reached. A lawyer was retained by the college to negotiate with Fulton.

Students and alumni have been discussing the issue at great length on Facebook. PUC Academic Dean Nancy Lecourt has met with students who are majoring in psychology and social work to reassure them of the college’s commitment to them and their educational program. The job postings for the vacant positions were shared with students, and Lecourt said the students provided valuable suggestions for the search for new faculty.

The students who marched on campus expressed support for their professors and their desire to have their voices heard. Student Association President Nic Miller said, "From my perspective the march was about making students' concerns tangible." For Miller, the demonstration signaled a willingness to place dialogue above classes and studies and showed students' attentiveness to the issue. "With that in mind I do think today [was] a success and a stepping stone toward really meaningful dialogue," Miller said.

As negotiations with Fulton continue, the consequences have been heavy on both sides. The college has seen a strong department decimated. For Fulton, who has spent nearly thirty years teaching at Pacific Union College, this is not the way he wanted his career to end.