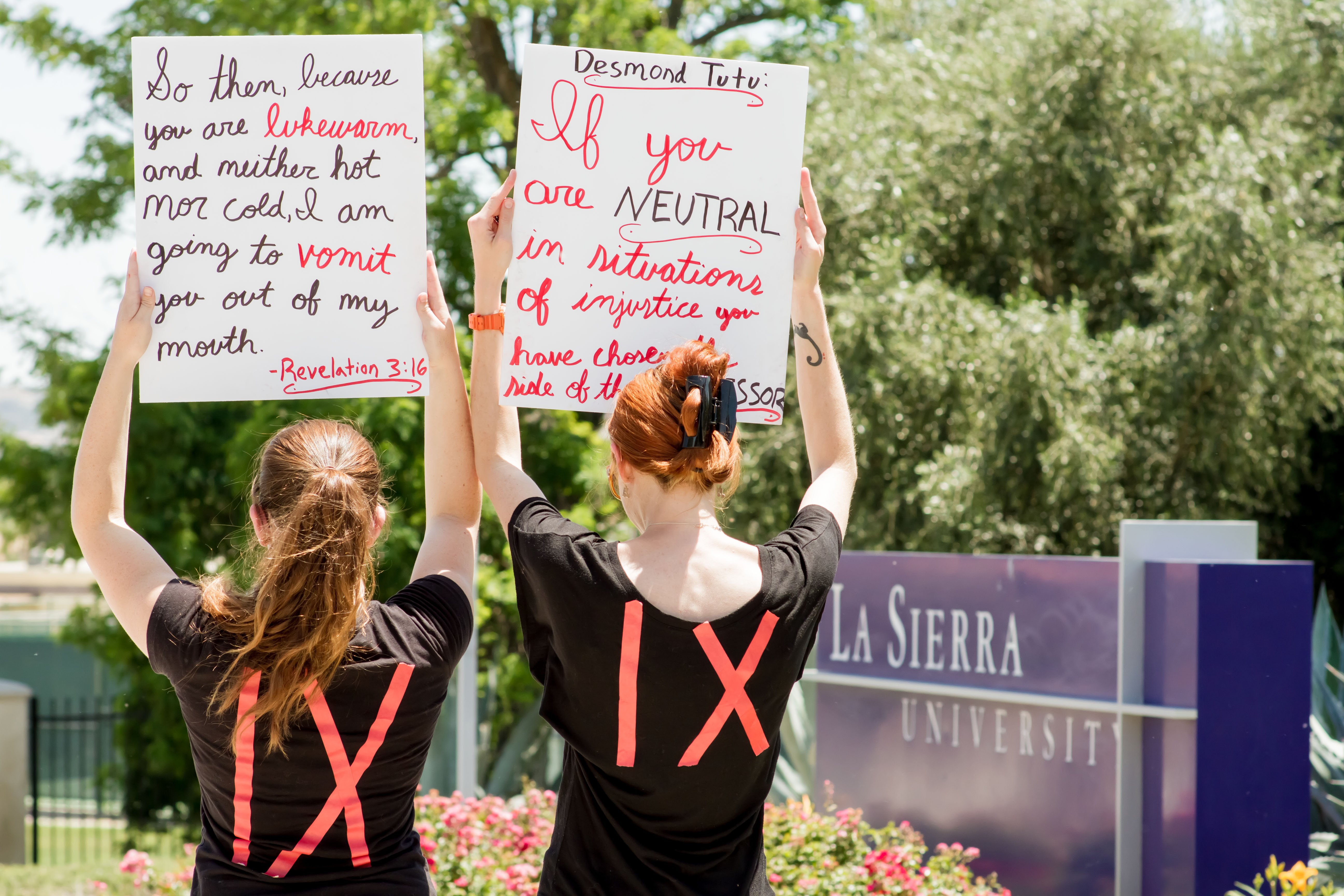 RIVERSIDE - A group of La Sierra University students and alumni demonstrated for three hours today outside the gate of La Sierra University for changes to how La Sierra implements Title IX. Title IX is a federal law in the United States that applies to colleges and universities receiving federal financial assistance from the U.S. Department of Education, including from state and local educational agencies. The Office for Civil Rights (OCR) enforces Title IX claims dealing with sexual harassment and sexual violence. According to its website, "OCR evaluates, investigates, and resolves complaints alleging sex discrimination. OCR also conducts proactive investigations, called compliance reviews, to examine potential systemic violations based on sources of information other than complaints."

Juana Muñoz, one of the demonstrators and a senior Religious Studies major at La Sierra, said she got involved in the event because she knew one of several victims of sexual abuse on campus. "The victim shielded her trust in me," Muñoz said. She kept silent until now because she wanted to respect the victim's ongoing Title IX case on campus, she said.

Muñoz said the demonstration was meant to call the attention of students, community members, and passersby to the website www.unsilenced.us. The website includes several candid stories of unnamed victims of alleged sexual assault on La Sierra's campus who have come forward. So far ten students, past and present, have shared their experiences, several of them reporting frustration with university officials who were slow or dismissive in handling complaints. The website also includes a petition that makes seven very specific demands of La Sierra Administration:

Demand One: The Title IX coordinator position must be increased from part time to full time, as mandated* by the Department of Education, Office for Civil Rights (2015).

Demand Four: Develop, publish, and publicize a Survivor’s Bill of Rights to be provided to each survivor with a hard copy upon reporting.

Before the public demonstration, held at the intersection of Sierra Vista Avenue and Pierce Street between La Sierra University and the La Sierra University Church, the petition had been signed over 440 times. Signatures included current students, alumni and faculty members. Demonstrators say they received hundreds more signatures during the demonstration, as students walked to and from this morning's chapel service held at the University Church.

One LSU alumna, Taryn Davis, said she joined the demonstration because she cares about the university "and because we can do better," she said, referring to how complaints of sexual harassment are dealt with.

Katie Cicchetti, a student at nearby California Baptist University who attended La Sierra Academy, said "I'm out here because I believe in supporting victims or giving voices to those who feel like their voices have been taken by those who aren't enforcing the codes that are in Title IX." Cicchetti said she hopes the demonstration will bring awareness. "I hope it will bring awareness to students that you are safe here and you have rights--legal rights and human rights."

Leonor invited the campus to attend a town hall meeting at 5:00pm this Thursday at the Troesh Conference Center in the Zapara School of Business to allow students. Leonor said he would be moderating the conversation.

Recently, you may have received detailed communications from certain individuals about a Title IX case at La Sierra. Accuracy matters, and it is troubling to see blatant inaccuracies disseminated as if they are facts. However, La Sierra University ethically and legally cannot and will not engage in a point-by-point response about a situation concerning students at this school. The Family Educational Rights and Privacy Act (FERPA) prevents us from doing so, now or in the future.

What we can say:

• The petition and other messages calling for La Sierra University to “reform” sexual misconduct policy are based on outdated information. The university voluntarily updated its Title IX policy last November. You can read it here: https://lasierra.edu/fileadmin/documents/sexual-misconduct/title-IX-poli.... But despite this policy change, there are some who choose to distort our positions by citing our now-defunct policy.

• A decision has now been reached in the appeal of the Title IX case on campus. That decision affirms some but not all of the points raised in the appeal. We expect the process to be completed soon.

• Again, because of confidentiality obligations, we are legally prohibited from providing any additional details about the case, now and in the future. We do want the entire campus family to know, though, that we take seriously the safety and well being of our students, faculty, and staff.  We look forward to continuing to foster candid and constructive dialogue on the prevention of sexual assault and harassment on our campus.

As a learning community, our deeply-held values speak of our commitment to justice and wholeness.  We work diligently to connect students to important causes that they can give their lives to, and we celebrate faculty and student commitments to make the world a better place.  Ending sexual violence and harassment is something we care deeply about. We are proud of our long history of educational work on these issues on our campus and in our community, and we pledge our continued commitment to support these efforts.

Let us, as a campus community, continue to embrace our commitment to justice and equality and to find new meaning in the words of Micah: “to act justly, to love mercy, and to walk humbly with our God.”

This initial news report is part of a larger ongoing story at La Sierra University. We will provide further in-depth coverage of the event as things unfold. Please check back in the coming days for more on this story.

This story initially stated incorrectly that Pastor Sam Leonor spoke in favor of the petition. His chapel remarks were limited to inviting students to attend Thursday's town hall meeting.

*UPDATE: The creators of the petition have added the following note: "As some have pointed out, 'mandated' by the Office of Civil Rights (2015) too strongly expresses what the 'Dear Colleague' guidance letter urges universities to do. Universities receiving federal funding are 'urged to' designate a full-time Title IX coordinator position '[to] minimize the risk of a conflict of interest and in many cases ensure sufficient time is available to perform all the role’s responsibilities. If a recipient designates one employee to coordinate the recipient’s compliance with Title IX and other related laws, it is critical that the employee has the qualifications, training, authority, and time to address all complaints throughout the institution, including those raising Title IX issues.' ('Dear Colleague Letter on Title IX Coordinators,' Department of Education, Office for Civil Rights, April 24, 2015, page 3)."