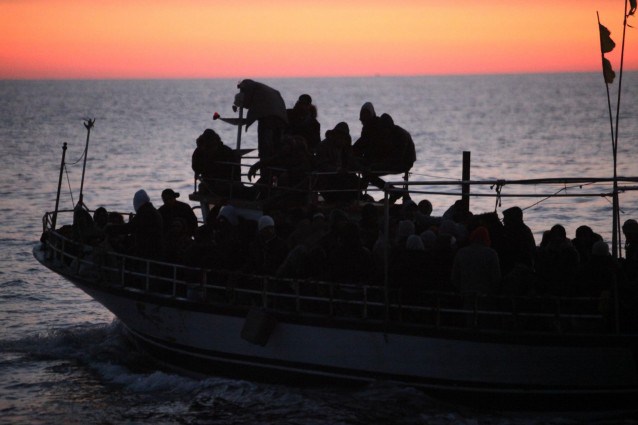 Jury president Meryl Streep gave the 2016 Golden Bear award to the Italian filmmaker Gianfranco Rosi for his documentary film 'Fuocoammare' (Fire at Sea), about the refugee crisis in the Mediterranean, during the 66th Berlin International Film Festival.

Rosi paid tribute to those who risked their lives to escape war and poverty, and to the people of the Italian island of Lampedusa who welcomed them. "Of course now at this moment my deeper thoughts go to all the people that never arrived to Lampudusa on these journeys of hope," Rosi said in his acceptance speech at the glittering awards ceremony. Rosi’s film shows daily life on the small island, mostly through the eyes of a young boy named Samuele who makes slingshots to shoot at birds and cactuses. In the nearby sea the Italian navy searches for overloaded boats full of refugees dying of suffocation and asphyxiation by diesel fumes and brings survivors back to Lampedusa for treatment and transport to refugee centers.

"I want to dedicate this award to the people of Lampedusa who were always extremely open to accept people arriving there," Rosi said. He noted that the flood of refugees in recent headlines actually began some 30 years ago for the island just off the coast of North Africa. Rosi said he had asked Dr. Pietro Bartolo, a physician on Lampedusa who treats refugees and appears in the film, why the island welcomes the tens of thousands of people who land there. "He told me Lampedusa is a place of fishermen, we are fishermen, and fishermen accept always, anything that comes from the sea. So this may be a lesson that we should learn to accept also anything that comes from the sea." Rosi said.

But what are the implications, in this disrupting migrant crisis, for Europe's own political, cultural and religious profile? Let's consider three aspects of it.

This migrant crisis is not only Italian, it's also European. More than a million migrants and refugees crossed into Europe in 2015, sparking a political crisis as countries struggled to cope with the influx, and creating division in the EU over how best to deal with resettling people. The vast majority arrived by sea but some migrants have made their way over land – principally via Turkey and Albania. Winter has not stemmed the flow of people, with 135,711 people reaching Europe by sea since the start of 2016, according to the United Nations High Commissioner for Refugees. The European migrant issue accelerated to crisis in 2015 when a rising number of refugees and migrants made the journey to the European Union(EU) to seek asylum, traveling across the Mediterranean Sea or through Southeast Europe. Of the refugees and migrants arriving in Europe by sea in 2015, 58% were men, 17% women and 25% children.The number of deaths at sea rose to record levels in April 2015, when five boats carrying almost 2,000 migrants to Europe sank in the Mediterranean Sea, with a combined death toll estimated at more than 1,200 people.

The shipwrecks took place in a context of ongoing conflicts and crises in several Asian and African countries, which increased the total number of forcibly displaced people worldwide at the end of 2014 to almost 60 million, the highest level since World War II.Amid an upsurge in the number of sea arrivals in Italy from Libya in 2014, several European Union governments refused to fund the Italian-run rescue option Operation Mare Nostrum, which was replaced by Frontex's Operation Triton in November 2014. In the first six months of 2015, Greece overtook Italy as the first EU country of arrival, becoming, in the summer of 2015, the starting point for a flow of refugees and migrants moving through Balkan countries to northern Europe – mainly Germany and Sweden. Since April 2015, the European Union has struggled to cope with the crisis, increasing funding for border patrol operations in the Mediterranean and devising plans to fight migrant smuggling. The EU launched Operation Sophia and proposed a new quota system to relocate and resettle asylum seekers among member states to alleviate the burden on the external borders of the Union. Individual countries have at times reintroduced border controls within the Schengen Area, and rifts have emerged between countries willing to accept asylum seekers and others trying to discourage their arrival.

But Europe's migrant crisis is not only humanitarian and political. It's also cultural. The foreign-born population residing in the EU in 2014 amounted to 33 million people, or 7% of the total population of the 28 EU countries (above 500 million people). By comparison, the foreign-born population is 1.63% in Japan, 7.7% in Russia, 13% in the United States, 20% in Canada and 27% in Australia. Between 2010 and 2013, around 1.4 million non-EU nationals, excluding asylum seekers and refugees, immigrated into the EU each year using regular means. In other words, there are countries and continents with a higher percentage of migrants than Europe. But today, the “migrants crisis” added to the old difficult integration of legal migrant workers and particularly the recent terrorism alert (Madrid, London, Paris, Brussels), is pushing Europe to enlarge the analysis and assessment of its cultural project and profile.

Europeans, perhaps for the first time in history, are confronted with cultural diversity in extraordinary and unique ways: linguistic plurality, radical ethnic differences, differentiated kinship systems, geographical diversity, parallel religious mind-sets, alternative medicines, etc. Europeans formerly managed to overcome and dismantle diversity by imposing their normative European abstract universalism onto every culture and nation in the world. This can be found in arts as much as in literature, in science as in theology. Such reductive cultural unity would like us to naively believe that polyphony, sociology, philosophy or science just started two or three centuries ago in Europe. And when these cultural differences came nearer, incarnated in the migrant workers Europe welcomed philanthropically, instead of entering in a true dialogue with them Europe just superficially applied this abstract universalism through powerful and sophisticated cultural strategies such as assimilationism and multiculturalism.

This first model of western universalism, coming from the French liberal tradition, bases integration on the idea of equality, as achieved through the full adoption of the rules and values of the dominant society and through the avoidance of any consideration of diversity. This republican assimilationist model promotes the need to respect common legal values and principles that are shared by all in order to foster a cohesive, inclusive society. It is based on the idea of mono-culturality and full adoption, by submission or absorption, to the rules and values of the dominant society. Thus the minority group becomes culturally indistinguishable from the majority.

This second model comes from the Anglo-Saxon pluralistic tradition, present also in countries like Sweden, Netherlands or Belgium. Integration is based on the respect and protection of cultural diversity within a framework of shared belonging. Here the cultural diversity is acknowledged, protected and even promoted. The state doesn’t try to eliminate or stigmatize cultural diversity but rather tries to adequately administrate it by assigning appropriate spaces and moments in which they can be freely manifested and cultivated. Here monoculturality is apparently overcome and gives place to cultural pluralism.

But the general problem is that all this remains a non-communicative and a non-dialogical pluralism. Each culture grows up in its own corner somehow segregated and excluded from the real present history where supremacy remains attributed uniquely to the dominant culture, with the cynical alibi that they have a formal and juridical recognition of other cultural sensibilities. Formal recognition of cultural diversity is just an elementary and rudimental kind of recognition that paradoxically can cohabit and even justify cultural subordination and segregation.

In face of the failure of the assimilationist and multicultural models, as the recent tragic events in Brussels also show, Europe urgently needs to articulate a richer understanding and new strategies to interact and dialogue with its different ethnic and cultural groups that no longer merely come from the outside but are now structurally part of it.

This European humanitarian and cultural crisis is also a religious one, but of a new type. It is not a classical crisis linked to the decline of traditional religiosity or to the presence of some radical religious views. The new challenge is how to allow and facilitate an interactive religious pluralism that includes, on one side, the non-believer and, on the other side, cultural groups that are structurally religious as, for instance, are the majority of Europe’s migrants. Christianity is no longer – culturally or theologically – the unique religion of Europe and it is no longer the only “true” religion. If we fail to recognize this basic cultural shift the “integration” as much as the “reception” of migrants will be partially a failure.

We European Adventists, and Adventist in general, would be mistaken if we consider this to be just a migrant crisis to be solved with some generous ADRA-like philanthropic interventions. Adventism is challenged to become an open, inclusive and flexible religion ready to articulate itself in fidelity to its own history and to the Bible – but also in relation to the outside world, exemplified by the new cultural and religious milieu of the migrants arriving in Europe.

We must resist a monolithic and homogeneous understanding of culture and religion, whether it comes from Europeans or from the migrants themselves. Adventism is not free from these anomalies. And “Fuocoammare”, Gianfranco Rosi's film, reminds us Adventists living in Europe that a noble and healthy cultural-religious model is necessarily relational and inclusive.