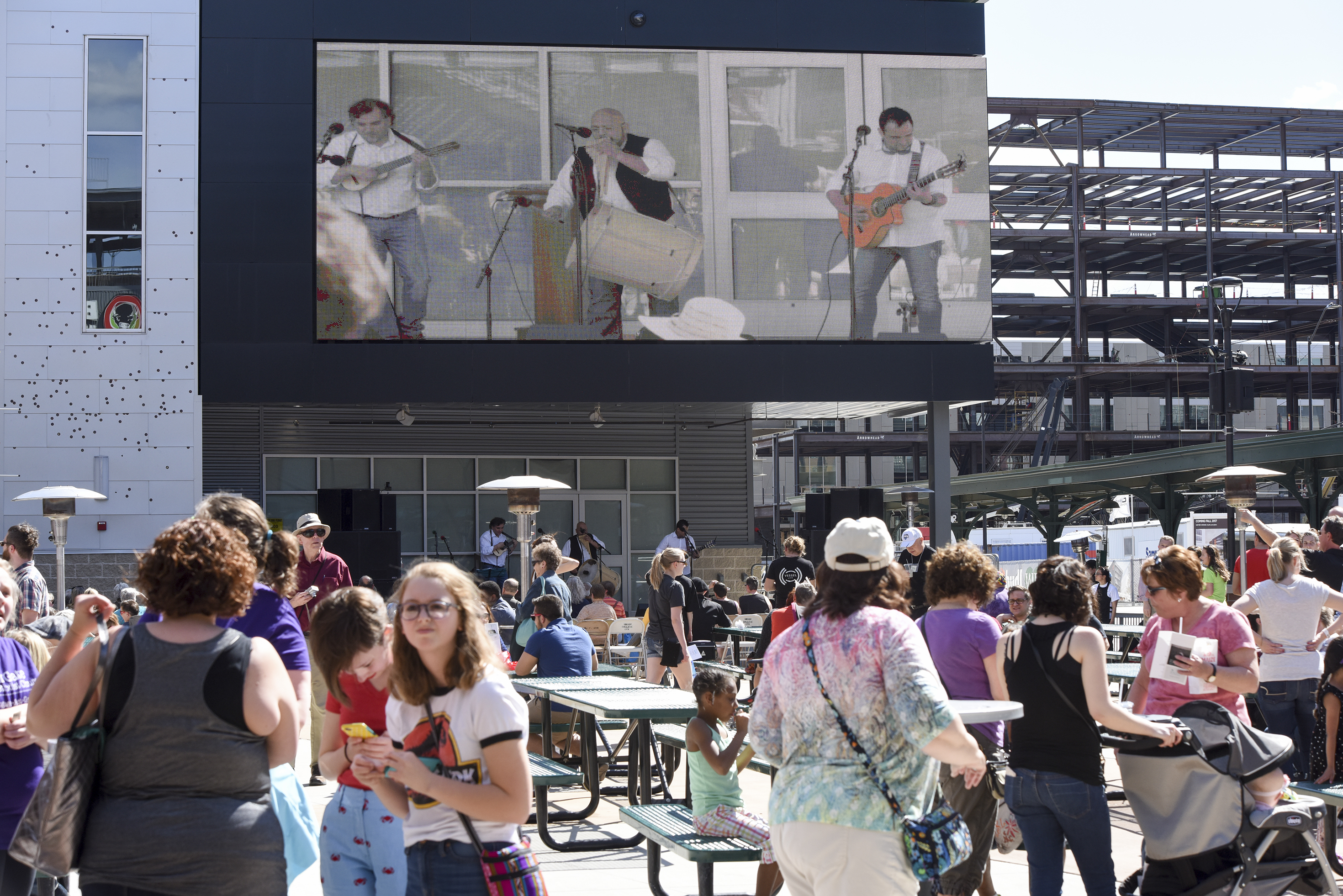 Chris Blake, associate professor of English and Communication at Union College, is chair of Lincoln's Interfaith Peacemaking Coalition. He spoke to Spectrum about the Coalition's big event last Sunday, which attracted lots of local news coverage, featured the city's mayor, and even boasted a long-distance message from the Dalai Lama.

Question: Last Sunday, the Interfaith Peacemaking Coalition celebrated its 30th anniversary by hosting an event for all city residents, inviting them to contribute to a campaign for 10,000 Acts of Peace. How did the event go? Who was there? What was the atmosphere like?

Answer: Drenched in warm sunshine, hundreds of people celebrated peacefully in a musical, festive atmosphere. They listened to music by the Kokyo Taiko Drummers, Union College Octet, Kusi Taki (Andean), and Star City Kochavim (Jewish). Ringing the event stood 18 tables of community organizations (including the Adventist Church’s Good Neighbor Community Center) that do peacemaking all year long. Mayor Chris Beutler read a Lincoln proclamation about a “City of Peace Week.” As former Lincoln mayor Coleen Seng wrote to me afterward, “What a great event! And the people just kept coming!”

Lincoln's 10,000 Acts of Peace campaign is part of a larger project: the One Billion Acts of Peace project supported by 13 Nobel Laureates. The city of Lincoln is the first city in the US to sign up to contribute as a community. Is Lincoln a particularly un-peaceful place? What is an "Act of Peace" anyway?

This world itself is a particularly un-peaceful place, and we are all residents. The Nobel Peace Prize Laureates spent two years coming up with 10 areas of peacemaking focus:

* Human rights for all

* Clean water for everyone

PeaceJam co-founder Ivan Suvanjieff said, “When you see something wrong, and you try to discover the root cause of the problem, and then create a plan to tackle the root of the problem, either alone or with others who also care—that is an Act of Peace.” Keynote speaker Dawn Engle, co-founder of One Billion Acts of Peace, called Lincoln’s 10,000 Acts of Peace “bodaciously ambitious.” She noted, “Governments are paralyzed and polarized, “ and that if everyday, ordinary people become difference makers, “maybe our leaders will follow us.” We are a grassroots movement to make the world a better place, beginning in our own back yard. 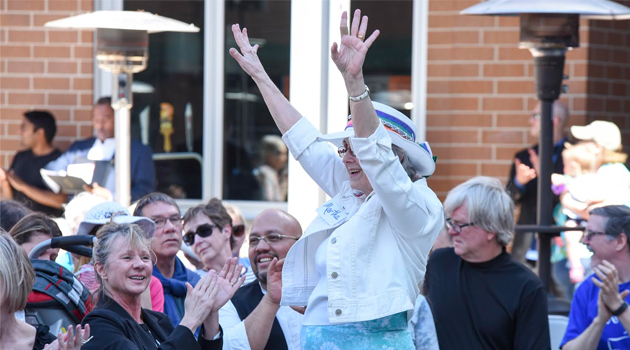 What are some innovative Acts of Peace you have come across?

My wife, Yolanda, together with fellow second-grade teachers at Beattie Elementary, led their 66 students in studying the courage of Ruby Bridges, one child who led the way in U.S. racial integration. Church members purchased livestock through Heifer International. Our Union College Conflict and Peacemaking class conducted a Peace Camp for inner city children. Martha, a Methodist friend (in picture above with arms raised), invited a Muslim neighbor to coffee. The world is healed one person at a time. Thousands of examples can be seen at lincolnpeacemakers.com.

Are there other ways the students and faculty of Union College have been involved in this campaign? 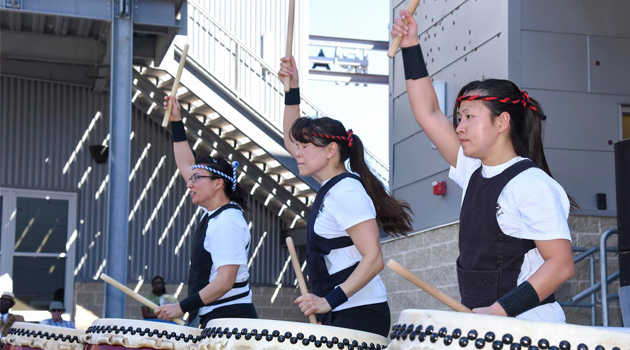 Jesus said: "Blessed are the peacemakers." But why is peacemaking important?

You are chair of the Interfaith Peacemaking Coalition. How long have you been involved? How long had you been planning Sunday's event? I understand you had a message from the Dalai Lama?

Our Coalition, with which I’ve been involved for five years, planned this event for a year. Yes, the Dalai Lama spoke to us. (No biggie, obviously.) In addition, Jody Williams, 1997 Nobel Peace Prize Laureate for her work in eradicating landmines globally, talked to us via Skype on the giant Cube screen. Our event was well publicized beforehand, as shown in this local news article.

To learn even more, people can connect to Lincoln Peacemakers on Facebook. Has the Interfaith Peacemaking Coalition organized anything similar previously?

We have sponsored such speakers as Jim Wallis, Jane Goodall, and Shane Claiborne. One year ago, the Coalition organized its event around the theme of economic discrimination. Keynote speaker Leonard Pitts, Jr., a Pulitzer Prize columnist, spoke to more than 1,000 people on “Eating (Jim) Crow.” Afterward we held five practical workshops to empower economic justice, hope, and healing in our community. The goal of the workshops is to inspire and inform practical application.

This is the first year we have held our event outdoors. We may do it again, although I did say a prayer of thanks for the good weather (84 degrees Fahrenheit) on April 3 in Lincoln, Nebraska. Five days earlier we had snow. Whatever the weather, we were determined to make peace with it, naturally. 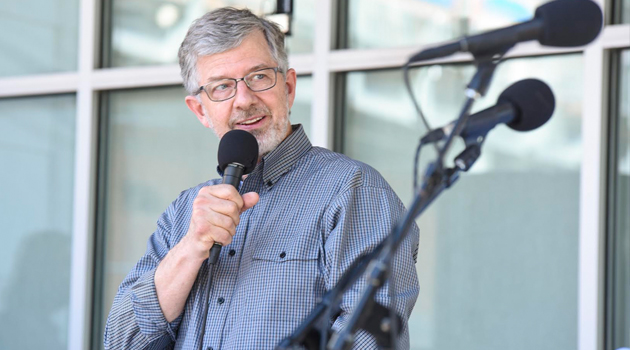 Chris Blake speaking at the event.