One of the most insightful stories from antiquity is found in Plato’s “The Apology” (20c-24e). Here Socrates, at his trial, gives an account of how he developed a reputation for wisdom. It began, he relates, when his friend Chaerephon asked the Oracle of Delphi if there was anyone wiser than Socrates – and was told that no one was. Socrates was puzzled when his friend told him this because his self-assessment was that he possessed no particular wisdom at all.  So, to perhaps disprove the Oracle, he visited and questioned various men of Athens who were reputed to be wise. And the surprising result was that, while these people thought themselves wise, upon examination Socrates could see that they had a false sense of their own wisdom.  A “great abundance of human beings who suppose they know something, but know little or nothing” (23c). And, Socrates discovered, people generally are displeased when this knowledge-gap is pointed out to them. He was consequently executed by the Athenians for “corrupting” their youth.

Not knowing is the minimal, unencumbered definition of ignorance. Unfortunately the word is too often applied in pejorative sentences, like: “You ignorant #%&*@!!”  But, just beyond the simple “not knowing” definition is the question of whether we recognize it in ourselves. Better to know you don’t know than to think you do when you don’t.

To know that you do not know. This is intellectual humility and a foundation upon which wisdom can be built. Or, so suggests Plato, anyway.

Now, at this point I can envision various unsurprising ways a reader might dispute the idea I am expressing here. One would be to think it is simply inaccurate. “Hey,” you might say, “I know lots of things. I have competence. I’m employed, after all. And am good at what I do.” But Socrates has a response:

Finally, then, I went to the manual artisans... I knew that I would discover that they, at least, had knowledge of many noble things. And I was not played false about this: they did have knowledge of things which I did not have knowledge of, and in this way they were wiser than I. But, men of Athens, the good craftsmen also seemed to me to go wrong in the same way as the poets: because he performed his art nobly, each one deemed himself wisest also in the other things, the greatest things.” (22d-e)

What Socrates differentiates here is types of knowledge, and thereby its inverse—ignorance. It is the difference between the Greek words techné (technical know-how) and sophia (wisdom—understanding of universal truths). The mistake is to presume that, because we may have demonstrable techné, we therefore also have sophia.

But, even if you grant this, there is another issue that is more central to my concerns in this essay. A God-believer also has access to another, presumably superior, source of knowledge—revelation. For the Christian this is the Bible. And here the argument might take this form: “It’s one thing to talk about man’s natural ignorance, but I have access to infallible, God-grounded knowledge—the Bible. This superior source totally washes out the ignorance I otherwise would have, replacing it with certainty and fully-trustworthy knowledge.” And, as Adventists, I suggest that we historically have doubled-down by adding Ellen White’s writings (a far larger collection of material, produced closer to our present day), as well as historically accepting the Seventh-day Adventist identity of being the major player in God’s eschatological game-plan. Consequently Adventists especially can feel secure that we, at least, do not suffer from ignorance.

Now, irrespective of whether you personally accept this traditional Adventist perspective, there are some caveats that should be addressed. Primarily, we ought to recognize that any acceptance of any revelatory source is initially a conclusion, not a self-evident truth that requires no proof. We do not spring from our mother’s womb as God-believers. We adopt beliefs, based on a mix of religious/social acculturation, information, reasoning and spiritual experiences. And, since there are large world-populations of differing and inconsistent believers, we should also recognize that not all god-paths result in correct god-knowledge. It is obviously possible to err in our understanding of what God is saying in our chosen revelatory source material—or if the material is even from God.

This is the Interpretation Problem. Even if one assumes an infallible source, the information is assimilated by fallible receivers. In my church experience I find this potential difficulty is too often ignored. Frequently as a simplifying move. There are myriad ways in which we humans can misunderstand and the maze of potentially erroneous paths is distressing. We want and need safety, familiarity, boundaries and trustworthy norms. Following a God-derived guidebook is an obvious and reasonable path to those ends. It is not surprising then, given the bewildering world we must navigate, that we are tempted to simplify/ignore the interpretative problems to arrive at comforting certainty. But we do so at the risk of grounding our beliefs on a foundation that may not be as secure as we think. And we correspondingly may resist explorations of that foundation (such as I presume to do in this article) that risk destabilization and discomfort.

I have no desire to destabilize belief, per se. What I think should be a lifelong engagement—for every believer—is to repair, replace and strengthen our faith foundations. This could mean some discarding if a belief cannot measure up, but it also has the potential to produce a more consistent, defensible world-view. And one of the problems preventing dispassionate belief-examination is an under-appreciation of limited human perspective—our ignorance. Thus the starting point of knowledge, suggests Plato, is to recognize this lack. Not catering to ego – thinking ourselves wise in our own eyes—and not mistakenly misidentifying technical skill, education or even native intelligence – for life-directing wisdom.

This is a human problem—not a failure of Adventism, or any specific religious viewpoint. Human. Beyond any possible hubris it is the confines of our perspective. And, in my remaining but limited space, let me try to begin unpacking this idea and hopefully stimulate you toward further exploration.

We seek to understand what God communicates and the information is made available via inspired, yet human vehicles. We read their words, and they frequently seem to communicate information that is clear and unambiguous. Yet we interpret what we receive via the lens of our very specific experience, context, capability potential, and influences from surrounding authorities. This all usually takes place subliminally. So it is difficult to appreciate the risks of misunderstanding when God is funneling His truths down through our limitations.

One phrase that captures this dilemma well is this: a God’s Eye View. Consider this poorly-drawn (I’m no artist) visual metaphor: 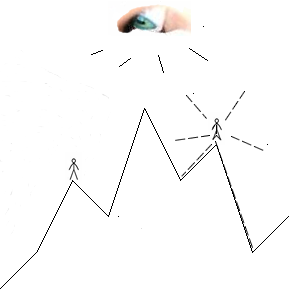 You and I are like the right-hand stick-figure human standing somewhere in the mountains. God is represented by the eye looking down. He “sees” (understands) everything and His vantage point is inaccessible to us. You and I might (metaphorically-speaking) even “see” more than some other human (represented by the left-side figure, standing on a lower peak), but there is much we cannot understand, both because of our specific circumstances (where we’re “standing”) and our inherent limitation as humans (we’re not God). This concept should not be controversial, irrespective of whether you consider yourself religiously conservative or liberal. We have a dual-component problem with our field of “vision”.

But next consider a very common mistake we make, derived from this limitation. We are prone to commit the Fallacy of Composition. This is where we take experiences that we can properly understand and relate to—and inappropriately extrapolate them into universals, as if the broad perspective is nothing more than a sum of the small ones writ large. Some examples:

·         A sand dune is more than just a collection of a zillion grains of sand. It also operates at a macro level, with properties that are very difficult to guess based merely on knowing something about a grain of sand.

·         Similarly, a human body is more than a collection of a zillion cells. It is organized into sub-functions, aggregates of functions and finally consciousness producing a soul. Each level of organization displays properties far exceeding, and fundamentally different from, merely a large collection of cells. Thus, for example, cellular biologists would be unwise to think themselves adequately competent to opine on anatomy and/or medicine.

·         One of the most common financial-comprehension mistakes people make is assuming that a country’s (or world) economy is nothing more than a kind of really big family budget. We take what we understand about personal money management and think we can properly extrapolate those principles to the macro-economic level[1].

These illustrations of the Fallacy of Composition (with a multitude more possible in various contexts) stem from trying to move validly from our tiny specific experience into the fully general realm. Note that it’s not that we always fail to produce reasonable, workable world-views in this way. My point is that we are at risk of oversimplification and misdirection, stemming from an inescapable human limitation.

Now, how might all this relate to Adventism? It seems uncontroversial to me that the Seventh-day Adventist Church is presently struggling to work through a considerable breadth of difference in theological understandings, even to the level of different and incompatible world-views. And such divisions are distressing to a church that has the self-perception of being the world’s present-day repository of “The Truth.”  It’s no wonder then that the undeniable dissonance in our ranks elicits responses like “an enemy has sown tares among the wheat." But, while there are no doubt tares in every wheat field, I suggest that Plato’s story might have a beneficial effect in reminding us of how little we humans really know, and thus how humble we should be in our search for understanding. Such humility, besides being realistic, can also produce a calmer climate where people of good will—yet who disagree about important matters—can actually hear one another, and perhaps grow in understanding if exchanges of viewpoint can occur in safety.

At least, that’s how it appears to me. But then, what do I know?

[1] This problem is frequently exemplified in what is known as the Paradox of Thrift.