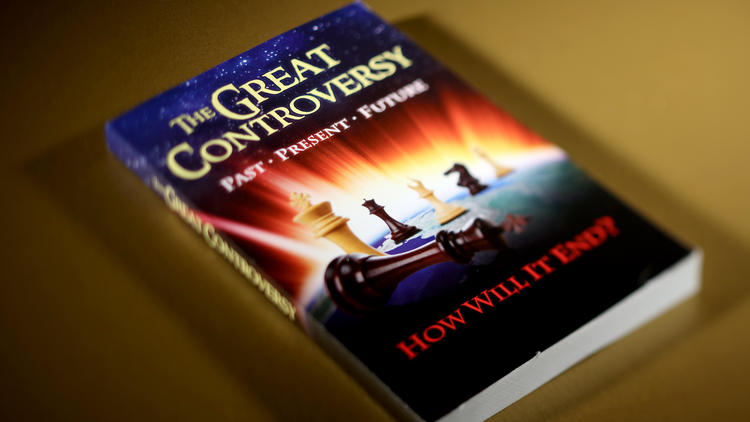 Chicago Residents Flooded with 600,000+ Copies of The Great Controversy. More than 600,000 copies of The Great Controversy have been mailed out–unsolicited–across Chicago. Stacks of them have been spotted near the mailboxes of apartment and condo buildings. According to Dwight Hall, chief executive officer of Michigan-based Remnant Publications Inc., a Christian publisher behind the mailing, individual donors bankrolling the mass mailing have a voice in where to send the book, which aims to help make America a better place and make a difference in the lives of others.  One of the reasons Chicago was selected to receive the "gift" is the city's problem with crime, an issue that faces other big cities as well. Mailings to several other large cities occurred earlier. From the Chicago Tribune, "Great controversy: What to do with religious books sent to Chicagoans."

Florida Church Defaced with 666 Graffiti. The Jupiter Seventh-day Adventst Church in Florida has been defaced with "666," upside-down crosses, and other vulgar graffiti. The main church, its entrance sign, and a storage building were spray-painted. No culprits have been identified. In September of 2015, Florida vandals also painted 666 and other inappropriate messages onto a shrine for Saint Padre Pio of Pietrelcina at the Our Lady Queen of Martyrs church. Locals find such incidents disturbing. From ABC affiliate WPBF, "Jupiter church vandalized with '666,' vulgar graffiti."

Jamaica Churches Will not Hide Criminals. Jamaica Union Conference President Everett Brown says pastors and congregants have been instructed not to cover up crimes, especially against children.  "We have told our pastors that, listen, the time for hiding is over; you have a legal responsibility to do this," Brown stated during a Gleaner Editors' Forum.  For decades, the Christian community has been accused of shielding members involved in criminal acts, with the Catholic Church in particular being accused of covering up instances where senior members have molested children. From Jamaica Gleaner, "No Cover-Up’ - Seventh-Day Adventists Vow To Report Child Molesters And Other Criminals Who Might Be In Their Ranks."

LLUH to Use State Bonds for Financing. Loma Linda University Health has asked to receive monies from a 950-million dollar revenue bonds issued to help finance its plans to buy, construct, improve, or renovate its health facilities in the Inland Empire.The Murrieta City Council voted its approval for the bonds which  will help Loma Linda Medical University Center continue its expansion and improvement of planned medical facilities including its Murrieta facility that opened in April 2011. Most of the bond money will be spent to replace the medical center in Loma Linda but will include future improvements at the Murrieta and Redlands hospitals. From Valley News, "Murrieta City Council gives its approval to Loma Linda University Medical Center’s $950 million bond issue."

Jamaican Adventists Speak Out in Favor of 'Buggery Law'. Seventh-day Adventist clergy in Jamaica have urged policymakers in that country to keep God in the center of deliberations. For the clergy, that means resisting the repealing of a so-called 'buggery law,' adopted from the British constitutions, which criminalizes  anal sex, oral sex and bestiality. Adventist leaders have adovacted a Bible-based approach to policy that they say combats sexual immorality, though they deny disciminating against homosexual individuals, a claim opponents of the buggary law have made. From Jamaica Gleaner, "No To Gays! - Adventists Urge Government To Keep God In Deliberations On Buggery Law."