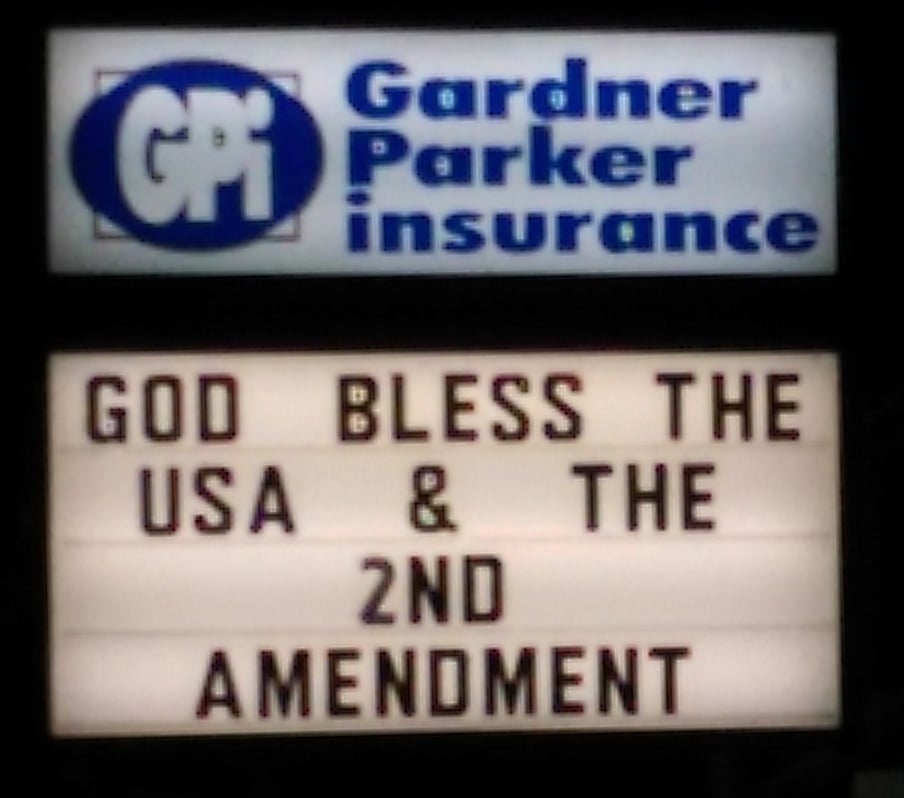 I have enjoyed a relatively peaceful life, at least as far as physical violence is concerned. I’ve not been in a fight since childhood. I’ve never been the victim of a violent crime, thank God, nor even threatened. (I’ve been threatened occasionally over my theology, but not with being beaten up, only with losing my salvation—though I’m reasonably hopeful that those who made the threats haven’t the authority to enforce them.)

On our farm we kept a small-calibre rifle near the garage door that we’d use now and then, such as when an animal came around that we suspected of being rabid. (A word of advice: instead of shooting the skunk in the garage attached to the house, give it every possible opportunity to go outside first. Please.) As for killing things, we’d occasionally butcher a steer or some chickens, which I accepted as part of life though I didn’t particularly enjoy it, and it’s one reason why I am today a vegetarian, at least by one of Ellen White’s definitions of the term[1]. I didn’t think of killing as something fun, even if occasionally necessary.

But I’m not arguing with those who use guns for sport or for any necessary purpose. Here’s what does bother me: those Christians who have cloaked their guns in spiritual significance, who treat them as talismans of their faith, who appear to find satisfaction in parading their firearms about and anticipating self-defense in the name of Jesus.

Some years ago, on another Christian group, I’d written my belief that the sale and ownership of firearms should be regulated and guns registered, that the world was too crowded and too dangerous, with too many people with too little self-control, to leave such dangerous tools floating about without accountability. I got back several responses, all containing varying degrees of abuse. One brother (I assumed it was a man, though posting under a pseudonym) questioned my Christian bona fides and then went on to insult me enthusiastically, with words like idiot and fool and stupid. I remember that he added something like this: “When,” he said (not if) “someone comes to your house at night and shoots you in the head and rapes your wife then shoots her in the gut and murders your children and leaves their bloody bodies in their beds, you’ll wish you had had a gun.” He went on to describe a similarly bloody scene should someone try to take his guns away from him (which hadn’t been suggested), whether it was me (again, not something I’d presume to do) or anyone with an official reason to do so.

Is this really a Christian who ought to be walking about the world with small portable appliances by which he can administer instant death? I wondered. Is this someone who should be allowed to make life-and-death choices at all, much less in a split-second crisis?

Perhaps my peaceful life has left me underdeveloped in the paranoid qualities of character. I know that break-ins and murders happen. I try to be careful where I go at night, and check that my doors are locked. I’ve done two funerals for murder victims in my ministry. Could it happen to me? Sure. But I don’t spend a lot of time worrying about it, much less vividly picturing the horrors. Though I don’t look forward to death, I know that it will come to me sooner or later (more likely to have been hastened by my own fork and spoon than by a gun) and that there’s something much better on the other side.

Yes, violence is sometimes necessary. Bad people have weapons, so I want the police to have them, too. In some situations war is justified. (Not nearly as often, I’m certain, as our politicians try to justify it. President Eisenhower was right about a military industry that drives war-making by every political, financial, and media manipulation that its profiteers can come up with.)

Though I prefer it done by people trained for the job like policemen and soldiers, I admit that there’s a need for self-defense. But as a Christian person I admit that only with shame about the nature of my species. I cannot, no matter how hard I try, make guns a pillar of my faith, like the small business across the street from my church that has on its sign, “God Bless the USA and the 2nd Amendment”. God bless the 2nd amendment? Why? It’s a law not only flawed by poor composition, but even given its most generous possible interpretation, a sickening reminder of what a dangerously evil bunch we are.

Still, I’m fascinated by those Christians who manage it. How, in the face of teachings like “turn the other cheek,” and “love those who hate you, do good to those who spitefully use you,” and “if a man takes your coat, give him your shirt, too,” they can celebrate firearms in the same breath in which they celebrate the cross of Christ.

One New Testament defense of this firearms theology has to do with Jesus’ chasing the moneychangers from the temple. “That proves that it’s sometimes necessary to be violent and angry,” they say, as if that’s the single incident of Jesus’ life most typical of his methods. Perhaps Jesus got angry, though it’s important to note that it wasn’t over any threat to his own person, but because of what had been done in his Father’s name. Can you imagine Jesus stalking through temple with the butt of an assault rifle against his shoulder, muttering “So you think you’re going to crucify me? Go ahead—make my day!”?

Another I’ve heard is that Jesus, as the end drew near, asked his followers to have swords on hand. Yet if Jesus expected his disciples to defend him, why did he stop Peter from doing it in the Garden of Gethsemane? And what could two swords accomplish against the mighty Roman military anyway? At the very least, it would suggest a limited self-defense strategy. I’d be surprised if most Christian gun nuts would settle for two guns, and guns are more deadly than swords. (That’s why I think there’s merit in the explanation that Jesus’ disciples got swords not to do violence but technically to qualify Jesus to fulfill the prophecy of Isaiah 53:12 that he’d be counted as a criminal in his death.)

Of course, if you rely just on the Old Testament, you will find multiple ways to justify violent acts. From there you can make creative arguments not just for self-defense but for genocide and outright murder. But you will have to completely ignore Jesus.

I had a brother in the faith tell me that he’s storing up guns and ammo for The Time of Trouble, when he expects to barricade himself in his house and blast those damned Catholics who are coming to persecute him for his Sabbath-keeping. He will look in vain through the writings of Ellen White, who described The Time of Trouble for us, for any indication that it will be an armed confrontation. She compares it to Jacob’s night wrestling with the angel, and says “His only hope was in the mercy of God; his only defense must be prayer,”[2] and quotes Psalm 121: “He [God] shall deliver thee… His truth shall be thy shield and buckler.… Because thou hast made the Lord, which is my refuge, even the Most High, thy habitation; there shall no evil befall thee…"

This brother is a perfect illustration that theology follows temperament more than temperament is shaped by theology. The firearms theology comes from angry people’s fears, not from the Bible. This sacralizing of guns calls into question not only the authority of Scripture among conservative Christians, but its power to shape hearts and minds.

If you call yourself a Biblical literalist, you might remember that guns aren’t mentioned in Scripture at all, making it doubtful you can craft a Biblical case for raising them to the top rank of your spiritual priorities, as some do. And should you be a constitutional originalist, note those words “well-regulated” in the 2nd amendment, conveniently forgotten by those who want full private access to all weapons all the time. At the very least, you should remember that what constituted a firearm at the time of the writing of the Bill of Rights was a muzzle-loading black powder long gun that took several minutes to recharge and had indifferent accuracy, not an AR-15 that can fire 800 rounds a minute, which if you’re Adam Lanza can be used to kill 26 people in an elementary school, or if you’re Ted Cruz, to fry bacon.

A worldview of easy, if justifiable, violence is entirely understandable from a human vantage point, but from a Christian point of view, it roars the church’s failure to convey what it really means to be a follower of Jesus. So make all the arguments you want to for guns and protection and revenge. But please be honest enough to admit that your arguments are secular, not Biblical. Jesus identified them thus when he said, “If my kingdom were of this world, my servants would fight. But my kingdom is not of this world.” Had Jesus had a militia behind him, he would have escaped the cross, he would not have died for our sins, so he would not have been raised, and we would still be in our in sins (1 Corinthians 15:17).

If you will, hear my saddest prediction: when United States culture completely fails and falls into incivility, which in light of certain political developments I am increasingly open to believing could happen, it is here where the first active fault will open. It will be the angry gun hoarders who will pull the trigger on the dissolution of American society, not because they have guns, but because they are enraged and feel victimized and have convinced themselves that their guns are their salvation. Christians will be among them—may even be leading them. God have mercy on us, because there’s nothing more dangerous than one who thinks he has God on his side and a semi-automatic to back Him up.

[1] “All [Seventh-day Adventists] are vegetarians, many abstaining wholly from the use of flesh food, while others use it in only the most moderate degree.” Letter 99 (Jan. 8), 1894