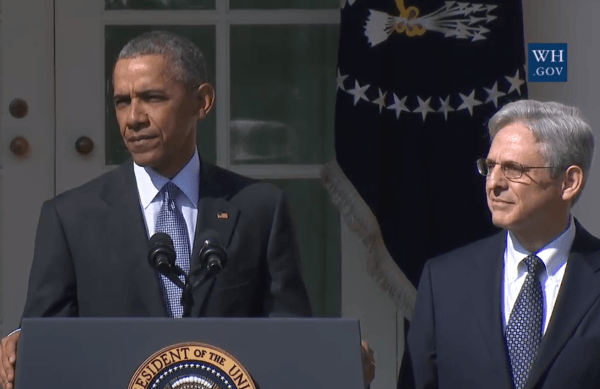 This morning President Obama threw a straight pitch directly into the strike zone when he nominated Judge Merrick Garland to the United States Supreme Court to fill the vacancy left by Justice Antonin Scalia. Garland, currently the chief judge for the United States Court of Appeals for the District of Columbia, was confirmed to that court in 1997 with bipartisan Congressional support and has been well regarded by both Democrats and Republicans.

Judge Garland would follow a traditional pathway to the nation's highest court. He is a  Harvard Law School graduate who served for a number of years in the Clinton administration's Justice Department, and the majority of the U.S. Supreme Court Justices once served or were nominated to the D.C. Circuit including Chief Justice John Roberts, and Justices Ruth Bader Ginsburg, and Clarence Thomas. Justice Elena Kagan was appointed to the D.C. District but was never voted upon in the Senate before she became a professor and then the dean at Harvard Law School. While the D.C. District covers a small geographical area, it does address all federal cases involving governmental entities headquartered in Washington, DC.

Garland has been on the short-list for a judicial appointee since the 1990s, and in 2010 he was considered a potential replacement for the retiring Justice John Paul Stevens.

While Garland is known for fairly moderate rulings, he is historically center-right in criminal law matters. In the days after the April 1995 Oklahoma City bombing, Garland, then serving as a Justice Department official in the Clinton administration, was dispatched to the site and later supervised the prosecutors as they obtained search warrants and met with survivors. The New York Times reports that he followed evidentiary procedures faithfully, such as obtaining subpoenas even when the phone and truck rental company volunteered to hand over evidence, to avoid problems at trial.  See "How Bombing Case Helped Shape Career of a Potential Justice," New York Times, April 28, 2010.

In his capacity within the Clinton administration, Garland also supervised the Unabomber case and the Atlanta Olympics bombing case in 1996 before he was appointed to the D.C. Circuit.

Garland seems to have a balanced view of the rule of law. In 2008 Garland wrote a ruling in the case of Hazaifa Parhat who had been held for six years by the U.S. military at Guantanamo Bay, finding that the prisoner should be released because the government did not have enough evidence that Parhat was, in fact, an "enemy combatant," an accusation that the Bush administration used to deny Parhat access to the civilian courts. Parhat argued that the military's accusation that he was attending a terror camp at the time of the September 11, 2001 attacks was false. In his ruling, Garland found the government's assertions unsubstantial when they relied on other government documents rather than independent evidence of Parhat's alleged terrorist involvement.

"The government suggests that several of the assertions in the intelligence documents are reliable because they are made in at least three different documents," wrote Garland. "We are not persuaded. Lewis Carroll notwithstanding, the fact the government has 'said it thrice' does not make the allegation true. In fact we have no basis for concluding that there are independent sources for the documents' thrice-made assertions."  See  "Court citesnonsense poem in ruling for Gitmo detainee," CNN, June 30, 2008.

In response, the Bush administration indicated it would be working to pass laws that would make it more difficult for Federal judges to hear cases involving the Guantanamo detainees.

Garland's balanced approach to religious discrimination issues and legal procedures is evident in the 2010 case of Payne v. Salazar. Garland wrote the decision in the procedurally complicated case involving Cassandra Payne, a long-term Federal employee of the Department of the Interior who worked Monday through Friday as a tractor operator and was able to attend church and Bible study on the weekends but suffered an allergic reaction to a bee sting that left her unable to work outside. After she was stung, the Department accommodated her at an indoor job but denied her weekends off. She filed an EEOC compliant and her supervisor, in retaliation, gave her an onerous "minute-by-minute" work schedule and she was unable to have breakfast with co-workers and she was denied leave time. An EEOC administrative judge found that she had been discriminated against because of her religion and awarded monetary damages. After the federal employer paid her the ordered damages, the employer refused to provide her modified work following a medical leave for a bad back. Payne sued again for the failure to accommodate her medical condition, and the district court relied on a quirk in federal law to dismiss the case on the grounds that she had only included the back accommodation issue and did not include the religious discrimination case she had already won. Garland found that Payne had a right to trial de novo of whatever claims she brought to court, and that the Court did not need to hear both old complaint and the new complaint.

In Levitan v. Ashcroft (2002), Garland joined the three-judge panel in ruling that a federal prison rule prohibiting Catholic prisoners from consuming a small amount of wine as part of the Communion sacrament violated their First Amendment free exercise rights. The lower court had ruled that the prisoners' direct use of wine was not protected when the supervising chaplain was permitted to consume the wine. The D.C. Circuit found that the lower court erred in holding that it was necessary for a practice to be mandated by the prisoners' religion in order to be protected since it "finds no support in our case law."

Garland's exact rationale for a position against rehearing in the Priests for Life v. HHS case, involving the contraceptive mandate in the Affordable Care Act is not clear as not all justices were required to make their views known on the issue. However, the judges who wrote opinions against a rehearing indicated that the previous decision was not relevant to RFRA as it had been based on a matter of law, not religion, and those opposing indicated that the issues were different enough after the Hobby Lobby decision to warrant reconsideration. Garland's silence on the issue would have been of greater importance if Garland were on the bench in time for the scheduled March 23, 2016 Supreme Court oral arguments in Little Sisters of the Poor Home for the Aged v. Burwell in which the Court will be addressing a similar issue.

Since Scalia's death fell in the midst of the most contentious election cycle in modern history, Senate Republicans have indicated that they will vote down any nominee that President Obama proposes in this election year regardless of who is nominates. The Republican obstructionist strategy is short-sighted. A Hillary Clinton victory against the now presumptive Donald Trump ticket, weak poll numbers in a Clinton v. Trump campaign, and its consequential impact favoring Democrats down the ticket, mean that a Clinton administration would have a greater opportunity to appoint an ideologically liberal justice to the Court to fill the Scalia vacancy. From both a political and practical perspective, Republicans who are willing to see past November should seriously consider Garland's nomination.