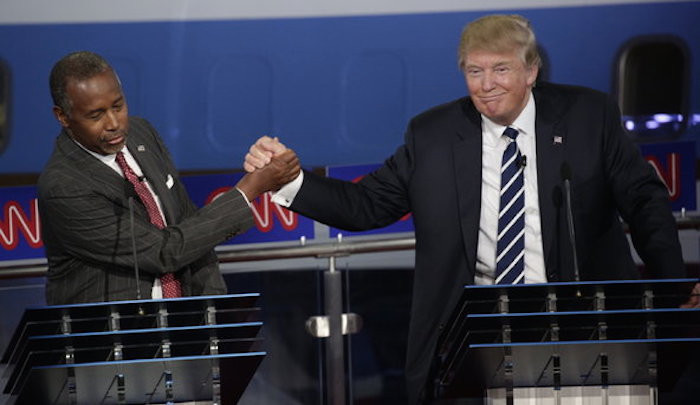 Dr. Ben Carson endorsed Donald Trump this morning one week after ending his own presidential campaign. Carson’s move is seen by many as a play for the White House as a prospective vice presidential running mate to Donald Trump. Trump added fuel to that fire, saying that Carson would play a “big, big part” in Trump’s campaign.

Back in February when the Seventh-day Adventist retired neurosurgeon was still in the Republican primary race, he told Fox Business News that if he were asked to consider being Trump’s running mate, “I certainly would sit down and discuss it with him,” Carson said.

“I would have to have major philosophical alignment with whoever it was. I would have to have guarantees that I could do some substantial things,” he said. In his endorsement of Trump, Carson said the two have "buried the hatchet," likely a reference to Trump's calling Carson's Seventh-day Adventist faith into question. It was just "political stuff," Carson said.

Despite a Carson’s rapidly declining poll numbers following his brief moment atop the GOP field in October, Carson did lead one poll--a Morning Consult survey of likely voters asking whom Trump (assuming he wins the GOP nomination) should choose as running mate. Carson led that poll with 11%. In the poll, Ted Cruz and Marco Rubio took 9% each, and Chris Christie, who also dropped out and endorsed Donald Trump, garnered 8% of the tally, as did Ohio governor John Kasich. The poll might not mean much; 38% of respondents had no opinion or declined to state a preference.

Since announcing a week ago that he was dropping out, Carson has served as national chairman of My Faith Votes, a Christian nonprofit aimed at getting Evangelicals to vote.

Should Trump win the nomination, and should he select Ben Carson to run with him on the Republican ticket, Dr. Carson’s bid for Washington D.C. will be invigorated, thanks to Trump’s coattails.