Spirituality and Religion: Crossroads or Intersection? 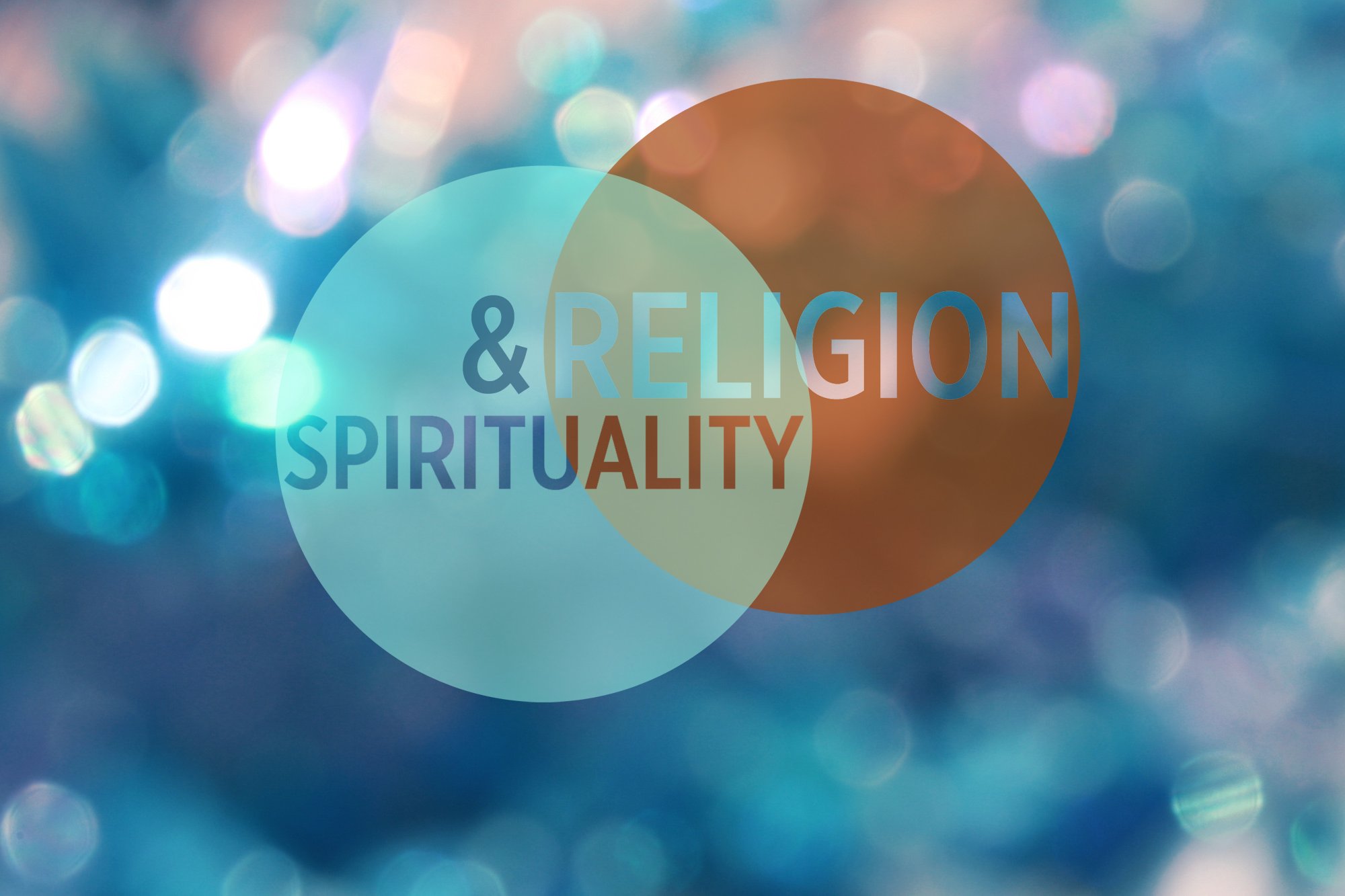 “I’m spiritual but not religious.” You’ve heard it a hundred times, and so have I. To put my cards on the table, I’m not a fan of that statement. Separating out spirituality from religion seems ridiculous to me. As if being “spiritual” is a conscious pursuit that one can so easily divorce from a “religious” context. As if the human exercise of spirituality could have survived through the ages without its cultivation in religion contexts. As if haphazardly selecting from an à la carte menu of spiritualities could possibly provide more depth than a religious set of narratives and practices shaped by millennia.

That is what I’m thinking when I hear someone profess spiritual-but-not-religious.

But I never say all that. The problem is if I respond like this out loud, I just sound defensive, which nobody likes. Although, truth be told, “defensive” is probably not far off. I am, after all, a pastor, so I’m rather invested in religion. Religion is kind of what I do.

But more than that, when I take a breath and actually listen, I think I get what lots of people mean when they make this distinction. Take, for example, this excerpt from the introduction of Diana Butler Bass’s Grounded, in which the author shares a conversation she had with a woman on a cross-country flight.

I used to be religious,” [the woman] explained. “I grew up Catholic, but left the church over the sex-abuse scandal. The church doesn’t make much sense in the world as it is now. But I still believe in God. I’d say I’m a spiritual person.”

Spiritual but not religious? Diana offers. The woman agrees.

“I’ve thought about [joining a different church],” she confessed. “But ‘joining’ an organization strikes me as a strange way to relate to God. And the institutional church is so broken, so hypocritical. It has wounded so many people. I just can’t do that again with any honesty.” She paused, seeming to wonder if she should continue. “But these other things—the Spirit all around, caring and praying for people, working for a better world—they ground me.”1

Okay, that I get. I don’t want to argue with that. If religion is a hierarchical institution that insists on exclusionary practices and fails to prevent hurtful abuses, and if spirituality is an openness to God’s Spirit and a heightened and healing presence in the world, then I get why people talk as if religion and spirituality are at a crossroads—and why people are consistently choosing the latter over the former.

When self-disclosures like this woman’s disarm me, I am able to see that there are indeed significant, distinct territories occupied by each of these two terms. It is valid, for example, to point out various expressions of religiosity that are devoid of Spirit: institutions, of course, but also lifeless beliefs, tone-deaf platitudes, and practices that harm more than help. Conversely, it is understandable why people might try to carve out a spiritual space unconstrained by religion and engage in individual practices of mindfulness, prayer, care for nature, or service to others, to name a few.

Even from this more understanding place, however, I still venture that both cases are unfortunate—religion without Spirit or spirituality without a religious home.

My interest, which arises to be sure from my location as a Seventh-day Adventist pastor and life-long church-goer, lies at the intersection of these two, spirituality and religion. Yes, like a Venn diagram, from fifth grade math. Accepting that spirituality and religion are two distinct sets, which often are in conflict with—if not totally ignorant of—each other, I want to explore where the two things meet and overlap in creative tension.

Definitions
A good place to start might be defining terms. My defensiveness about religion probably has at least something to do with a difference in definitions. Likely, I’m operating in those conversations with a broader use of the word “religion,” where religion encompasses the traditions, practices, and sacred stories of peoples through history—which, in my mind, are basically the bedrock of human spirituality. But that is almost certainly not what many people mean when they say they are not religious, and that's fair enough.

There are myriad valid and helpful ways to define these terms; I happened upon the following useful definitions in an article my wife gave me, written by professor of social work David Hodge.

Spirituality is “a fundamental human drive for transcendent meaning and purpose that involves connectedness with oneself, others, and ultimate reality.”2 To “connectedness” we might add language like being “grounded” or “rooted” or “centered.”

Religion is “a shared set of beliefs and practices that have been developed over time with people who have similar understandings of the sacred or transcendent . . . These beliefs and practices, which are designed to mediate an individual’s relationship with the sacred, are transmitted through community-based structures or organizations.”3

These are helpful, I think. Spirituality has to do with transcendent meaning, connectedness, being grounded, being centered. Religion has to do with communal practices and beliefs, which by their nature require some level of organization and structure.

Religion is probably the more familiar for many of us and the easier to identify. Spirituality is fuzzier, especially when in some circles, the term spirituality is mistakenly confused with labels like New Age, spiritualism, paganism, cults, etc., which are all technically religions.

Hodge offers further help here in clarifying what we mean by spirituality. In his article, he demonstrates for clinical therapists how to conduct an implicit spiritual assessment with a client. The reasons for an implicit assessment include that for some clients, explicit spiritual or religious language is not relevant or relatable to them. However, that does not mean that these clients are devoid of spirituality.4

So, Hodge offers a lengthy list of questions a clinician might incorporate into their general biopsychosocial assessment and ongoing therapy, which may help implicitly to tap into a client’s spirituality. The list includes questions, such as:

When do you feel most fully alive?
What gives you a sense of purpose and meaning in life?
What causes you the greatest despair/suffering?
Whom/What do you put your hope in?
What are your deepest regrets?
When in your life have you experienced forgiveness?
At the deepest levels of your being, what strengthens (or nurtures) you?5

These are productive questions for reflection, no doubt. And Hodge’s advice for therapists is instructive on a couple levels. For one, it may help us religious types be better attuned to the spirituality of those with an allergic reaction to overt religiosity or “organized religion.” But also, I think it helps us push past an opposite tendency we may have to let our religious engagement short-circuit reflection on the more Spirit-oriented questions, questions of spirituality.

Intersections
From this social-science point of view, it is clear that these spirituality questions could be engaged apart from a specific religious tradition. And one might also imagine a form of religiosity that rarely—or superficially—engages them. But for this pastor, these deeply personal questions are begging to be brought into conversation with sacred stories, intentional practices, and diverse community.
So, then, this makes me wonder where else we might look for intersections between spirituality and religion?

While there may be valid expressions of spiritual-but-not-religious and tragically anemic examples of religious-but-not-spiritual, what might an integrated spirituality-in-religion or religious spirituality look like?

Specifically from my own context, where might my sense of meaning and groundedness (spirituality) be nurtured and shaped by Adventist communal practices, traditions, narratives, and beliefs? And also, how might my participation in this particular religious community be animated by a well cultivated spirituality?

These questions challenge me, but also ground me, not only as a professional religionist but also more basically as a person. The search for and exploration of these intersections are a significant source of meaning and purpose for me. I’m grateful for Spectrum’s invitation to contribute bimonthly to this section of the website; my hope is to engage in and further conversations about intersections of the spiritual-religious variety. Among them:

And not because they necessarily have to intersect (they don’t), but more because I’m fascinated by and attracted to—and yes, invested in—these sorts of intersections. On closer self-examination, I realize that it’s not that a split between spiritual and religious doesn’t make sense (it just might in many cases); rather, it’s that I don’t want there to be a split. While there may be legitimate spaces for each to operate on its own, I long for a generative, life-giving intersection of the two.

In Grounded Diana Butler Bass observes that our collective answer to the question “Where is God?” has shifted from “Out/Up there” to “Here,” and hence people are hungry for a spirituality that is not other-worldly, but rather rooted, embodied, and embedded in the world. That I get, too. I resonate with that hunger. And my hope, my longing, is that we unearth and unleash sacred stories like Creation, Incarnation, Sabbath, and Wholeness, and that we learn to tell them in earthy, Spirit-filled ways.

Vaughn Nelson is Pastor for Discipleship and Nurture at the La Sierra University Church in Riverside, California.