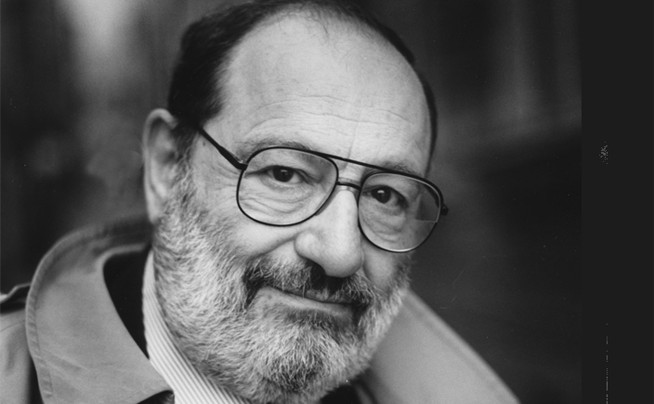 “Jorge, I mean. In that face, deformed by hatred of philosophy, I saw for the first time the portrait of the Antichrist, who does not come from the tribe of Judas, as his heralds have it, or from a far country. The Antichrist can be born from piety itself, from excessive love of God or of the truth, as the heretic is born from the saint and the possessed from the seer. Fear prophets, “Adso”, and those prepared to die for the truth, for as a rule they make many others die with them, often before them, at times instead of them. Jorge (the blind monk responsible for the murders in the abbey) did a diabolical thing because he loved his truth so lewdly that he dared anything in order to destroy falsehood.” - Umberto Eco, The Name of the Rose (p. 598)

Umberto Eco, the influential Italian semiotician, cultural critic, philosopher, essayist and novelist, died at age 84 on Friday, February 19th, 2016. He had been battling with cancer. And on that same day another literary giant also passed away – Harper Lee, whose fiction elucidated contemporary racial injustice in America. As many leading Italian intellectuals have done in past years[1] Eco also was, this fall, scheduled to visit our Italian Adventist Theological Seminary to present his book “Numero Zero”, a novel about the murky world of media politics, conspiracy and murder. But he left us too soon.

Eco had a Roman Catholic upbringing, being educated at one of the Salesian institution's schools, but became in time agnostic and relativistic about religion.He was appointed professor of semiotics at Bologna University in the 1970s, Europe’s oldest university, and from there elaborated a crossroad and multilayer cultural reflexion on our current modern and post-modern societies.

In this essay I will briefly comment on three possible indirect contributions of his work in relation to Adventism.

Eco began his professional career earning a degree in philosophy in 1954, writing a thesis on Thomas Aquinas. He developed, with his mentor Luigi Pareyson at the University of Turin, a philosophical reflexion on language and signification. What is the status and implications of a Sign in a general theory of communication and meaning-making? A Sign is, in general, something that refers through and beyond itself to something else. For medieval philosophers, that he diligently read and studied at that time, the condensed formula for this is: "aliquid stat pro aliquo" (something that stands for something else). Thus signification is understood as a relationship that links something physically present to something else absent (e.g. a red traffic light means to "stop"). But this link – from something at hand and known to something absent and unknown – is neither mechanical nor linear. Instead it opens a space of uncertainty and fluctuation. And it's in this fluid and fragile space between signifier and signified that conveyance of meaning takes place. In other words Eco considered that what is specific to human beings and culture is the complexity of indirect languages that are not characterized by precision or “univocity” (one meaning), but rather by “plurivocity” (multiple meanings) and interpretation.  And his philosophical-cultural reflexion on signification and indirect language is not only academic and speculative but also concrete and linked to the main socio-political events of Italy's current history – through a weekly column ("La Bustinadi Minerva") Umberto Eco wrotefor L'Espresso, an Italian nation-wide magazine.

2. The Text as an open reality

In 1959 Eco published his second book, Sviluppo dell'estetica medievale (The Development of Medieval Aesthetics), on medieval philosophy, and since then his interest focused more specifically on Semiotics. But his semiotic reflexion is nearer to Charles Sanders Peirce than to Ferdinand the Saussure who overlooked the importance of extra-linguistic reality and the importance of the agent (speaker or reader) in the process of signification. Eco started developing what could be called an “interpretative Semiotics” – grounded in understanding the text as an "open" reality. That led him to publish, in 1962, his book “Opera aperta” (translated into English as "The Open Work"). In it, Eco argued that literary texts are fields of meaning, rather than strings of meaning, that they are understood as open, internally dynamic and psychologically engaged fields. Literature which limits one's potential understanding to a single, unequivocal line – the closed text – remains the least rewarding, while texts that are the most active between mind, society and life (open texts) are the liveliest and best. Eco came to these positions through study of language and from semiotics, rather than from psychology or historical analysis, as Wolfgang Iser or Hans Robert Jauss did. The complexity present in the Signification process, as underlined in his first philosophical period is, in this semiotic period paradoxical, because here Eco embraced a typical contemporary understanding of Signification. Signification is not to be “unveiled” or “discovered” in a text as being already there but rather to be created by the reader during the process of reading. From a past specificity, Signification becomes a present experience.

3. The Reader as a non-removable component in the Signification process

Here is Eco's most important hermeneutic contribution. He is a strong defender of the whole “Hermeneutical circle”. Not only is the text central in reading or interpreting, but the reader is also – and the reader is understood as an active subject. “Traditional”, or “pre-modern” hermeneutics, was text-centered and dealt with a fixed meaning (what the text meant as written). Consequently it was obsessed in reaching the author’s intention. “Contemporary or modern hermeneutics” instead is reader-centered and presupposes a fluid and flexible meaning of the text (what the text means today) and the author’s intention is only one ingredient of the final process of interpretation.  The distinction between what the text meant and what it means today marks the shift from traditional to contemporary hermeneutics. The goal of contemporary hermeneutics is to set in motion the so-called “extra linguistic world” – the projection of new worlds of meaning. That is, to take seriously into account the actual situation of the reader.

In this sense Eco's hermeneutical endeavor comes nearer to the “Reader-Response criticism” approach to text reading, which is a school of literary theory that focuses on the reader and his or her experience of a literary work, in contrast to other schools and theories that focus attention primarily on the author or the content and form of the work. The difference resides in the fact that Eco's understanding of the reader is larger than that of reader-response-criticism and is characterized by a consistent dose of socio-politico-cultural analysis. In this sense texts are not only to be read but also to be written.

It is this cultural stance – in favor of the reader as a meaning-making subject – that defines his profile as novelist.  And here, in 1980, came his breakthrough to a far wider audience with the success of his historical mystery novel “The Name of the Rose”. A Gothic murder mystery set in an Italian medieval monastery. The novel combines semiotics, Biblical analysis, medieval studies and literary theory. It was adapted for the big screen by Jean-Jacques Annaud in 1986, starring Sean Connery as Brother William of Baskerville as he investigates a series of suspicious deaths. The complexity, paradox and openness of interpreting that pushes the novel’s characters toward their conclusions (Aristotle second book of his Poetics, on laughing), shows that reading is not a technical aseptic act to get some new information, but a human experience that can transform our fears into joy or our apprehensions into despair and violence.

“Jorge feared the second book of Aristotle (Poetics) because it perhaps really did teach how to distort the face of every truth, so that we would not become slaves of our ghosts. Perhaps the mission of those who love mankind is to make people laugh at the truth, to make the truth laugh, because the only true lies in learning to free ourselves from insane passion for the truth” - Umberto Eco, The Name of the Rose (p. 598)

It is evident that a strong defense of the “Sola Scriptura” principle, in its various forms, as today's Adventist mantra to solve every problem – can be misleading if we naively adopt a mechanical, linear and tautological hermeneutics. Our major strength (Bible) can easily become our Waterloo if we are not humble, wise and relational. A balanced and healthy hermeneutics never excludes complexity, paradox and lightness (capacity to laugh). This is Umberto Eco's legacy we Adventists, particular European Adventists, should never forget.