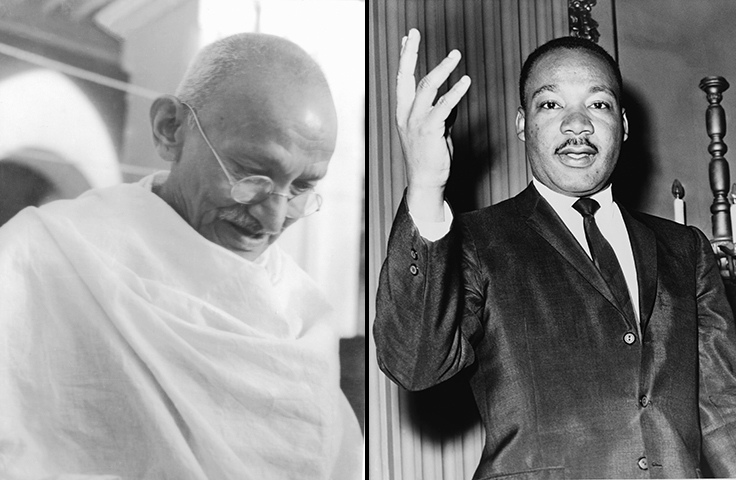 When a Christian studies world religions, it becomes obvious that one can learn lessons to apply on the path to maturity. Even as Gandhi gave credit to the gospels as part of his journey, Martin Luther King, Jr. acknowledged Gandhi as formative in his own understanding. In this month, when the United States pauses to contemplate Black History, this essay will reflect on Gandhi’s ideals which were influential to Martin Luther King, Jr. in the hope to provide reflective guidance in responding to evil today.

Sat, or truth, is a deep inward and honest reckoning. This became the first guiding principle for Gandhi and was a synthesis he derived from many cultures and religions. Gandhi felt that a deep self-assessment was a necessary first step in creating humility essential for viewing others with different eyes. An honest self-analysis should result in a person becoming aware of his own flaws, and lead to a deeper compassion toward the failings of others (Matthew 7:3).

Gandhi advocated more than a propositional truth. Rather, he valued a fundamental orientation that would first of all realize that there often existed a reality currently invisible to a person. This attitudinal adjustment would provide room for a realistic acknowledgement of limited perspective, illustrated well in the parable of several blind men touching an elephant. In this tale each blind man, touching a different part of the beast, adamantly claims to offer the true description of the whole creature. For Gandhi, any claim to truth has to include an assessment of failures and an admission of limitations in perspective. For example, claims for the supremacy of democracy would include the acknowledgement of some unsavory aspects, such as institutional racism and colonialism.

A second principle highlighted by Gandhi is the concept of ahimsa, which is the way of compassionate love over the current default situation of violence. Since nature tends toward violence, one must consciously choose to exit the status quo. A person dedicated to sat (truth) cannot remain violent. After all, an honest self-examination would reveal that one’s own hostility is typically more than righteous indignation, and cause one to consider the likelihood that any hostility indicates the presence of evil inclinations within oneself. That is to say that when one is eager to subdue evil in one’s enemies it must be remembered that one also has evil. Tolstoy said:

“The line of good and evil cuts through the heart of every human being.”

While most will not be involved in physical violence, one can become crippled by addiction to pet hatreds so as to develop marred views of reality. A commonly posted Internet meme says, “we don’t see things as they are, we see them as we are.” After all, the heart is deceitful (Jeremiah 17:9).

Martin Luther King’s sermon gives a compelling endorsement that love of enemy is the most powerful and healthy way to face evil. For him, God’s justice, true justice, didn’t mean punishing enemies. Rather, justice for a follower of Jesus is reconciliation. Today we call it “restorative justice.” This justice restores individuals to themselves and it restores relationships with one another. King wanted the persecuted and the persecutor to find healing. When we live in this justice that seeks restoration, healing, and reconciliation, King said that we live in the “Beloved Community.”

Violent deeds and hostile words inevitably ratchet into a mimetic contagion, where violence begets violence and hostile words become increasingly hurtful. Gandhi made the paradoxical assertion that non-violence was the mightiest weapon and the greatest force at the disposal of mankind, as it will break the seemingly inevitable cycle of hostility and bring true and lasting reconciliation.

A literal English translation of satyagraha might be firmness in devotion to truth. Gandhi felt so convicted of the truth of ahimsa that he searched for creative ways to turn this impulse outward into the community.

Satyagraha requires unflinching courage – the same as what would be required for combatants. For Gandhi, in the rare situation when one’s only choices were violent struggle or passive acquiescence, he would choose the violent response as more courageous. Yet, in nearly all cases he advocates for a creative third way. Thus, satyagraha is more challenging as one searches for loving understanding to be expressed in a manner with the greatest hope for success.

Gandhi’s autobiography, The Story of My Experiments with Truth, recounts his quest to turn a conviction of the truth of non-violent love into something that would affect community – satyagraha. He correctly labels his journey as “an experiment.” Gandhi’s journey was informed by many including Thoreau’s idea of civil disobedience and Tolstoy’s conviction of non-violence.

Indeed, Jesus left directions on how to respond to violence and injustice. For example, the admonition to “turn the other cheek” probably refers to a slave receiving a backhanded slap to the right cheek given by a right-handed person. Turning the cheek to the left forces the hitter to hit the victim as an equal and alerts the hitter to the reality that he is treating another human as a lessor. In this subtle way the victim can confront the aggressor with his abuse of power.1

“When the princes of this world finally understood the real import of the Cross, it was too late to turn back: Jesus had been crucified, and the Gospels had been written. Thus Paul is right to affirm: ‘If the princes of this world had known (the wisdom of God) they would not have crucified the Lord of glory’ 1 Corinthians 2:8 Western theology, in rejecting the idea of Satan tricked by the Cross, has lost a pearl of great price in the sphere of anthropology.

Medieval and modern theories of redemption all look in the direction of God for the causes of the crucifixion: God's honor, God's justice, even God's anger, must be satisfied. These theories don't succeed because they don't seriously look in the direction where the answer must lie: sinful, humanity, human relations, mimetic contagion...They speak much of original sin, but they fail to make the idea concrete. That is why they give an impression of being arbitrary and unjust to human beings, even if they are theologically sound.

In triggering the victim mechanism against Jesus, Satan believed he was protecting his kingdom, defending his possession, not realizing that, in fact, he was doing the very opposite. He did exactly what God had foreseen. Only Satan could have set in motion the process of his own destruction without suspecting anything was wrong.”2

Musings on Creative Responses to Evil

Roundtable conversation at The One Project/Seattle stimulated the question, “Do the 28 Fundamental Beliefs provide answers to all of life’s questions?” Citing the Great Controversy motif, one person implied, yes, they did. A surface reading of cosmic conflict does offer a framework to grapple with some theodicy questions, yet in a world drenched with insidious evil, a spiritual person is faced with numerous choices in crafting a response to this evil.

A student of world religions might also ask, “Do the Seventh-day Adventist 28 Fundamental Beliefs inform with regards to satyagraha?”

How do we respond to evil? Fight? Flight? Look for a third way? Using war language gives an incomplete description of the nature of the cosmic conflict; it is not a battle to be won with force or talking points. Over millennia God has responded with demonstrations and actions as He wisely realized that claims, counterpoint arguments, and violence would not solve the problem of Satan’s accusations that He was exacting, revengeful, and arbitrary.

So, what is the nature of the cosmic conflict? The conflict was not about maintaining a top-down power structure; Satan roams the Earth now seeking whom he can devour. It is a war of words with each side claiming the high ground.

How can God’s response influence one’s choices now in responding to overt and covert evil?

Once we see who Jesus really is and what this says about God, we begin the journey by becoming participants in the cosmic conflict. Counter intuitively, this will likely cause one to disengage from the kingdom of the world with its survival-of-the fittest framework, and live under the reign and rule of the suffering, servant King. Because of Jesus we know it is right to identify with the poor, the sick and the outcasts. We did not receive this conviction from Caesar’s pagan world. The civil rights reform, the end of apartheid in South Africa, and the Czech Velvet Revolution happened because of Jesus. Martin Luther King, Jr., Gandhi, and countless others like them have changed this world only because of Jesus. This is the Kingdom that we are joining when we embrace the Good News.

Amidst life’s conflicts and enemy encounters, let us commit to developing a Christ-like character as we embrace a courageous, wholehearted search for a third way. A Christ-follower can be like an oak tree of righteousness (Isaiah 61:3), committed to a path of demonstration, restoration, and enemy love.