The Great Controversy in the First to Fourth Centuries AD 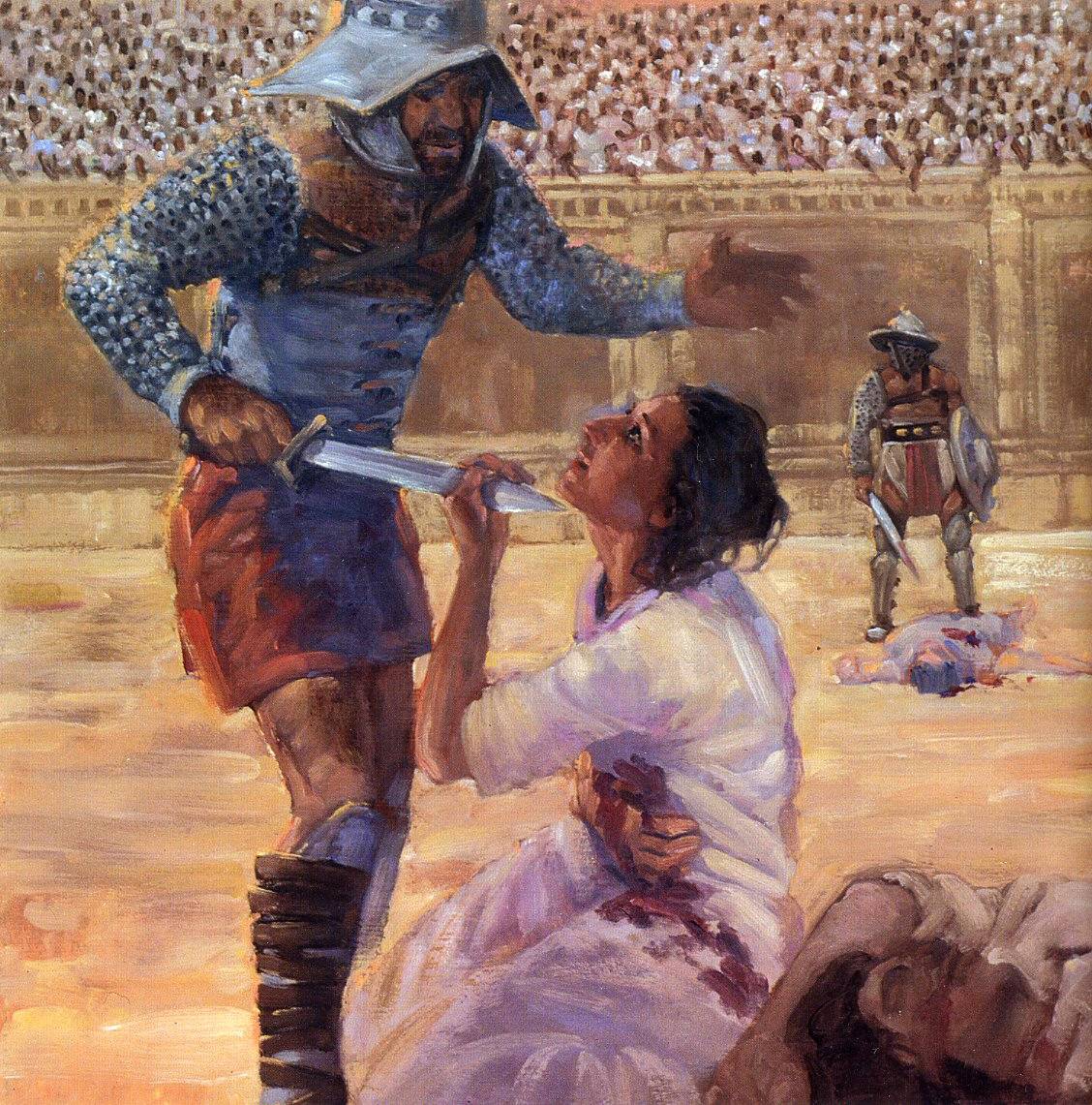 There can be few episodes in earth’s history more illustrative of the Great Controversy’s working out in human affairs than the repeated bloody persecutions of the early Church. The stories of heroic fortitude and commitment shown by the early Christian martyrs inspired the believers of their own time and literally has inspired (and continues to inspire) Christians for two thousand years.

At times, however, we may misunderstand some aspects or implications of the early persecutions. The Church Father Tertullian (c.160–c.254 AD), famously avowed: “The blood of the martyrs is the seed of the Church.” Many Christians have taken his statement as a universal and eternal verity. Among Seventh-day Adventists in Western countries, I have observed a tendency to suggest that we ought to desire persecution, since perhaps then our church growth might be reignited. In my experience, the articulation of such sentiments is usually qualified—when I was a boy what one heard was that perhaps “a bit of persecution” would be good for Adventists in Australasia, Europe or North America—it might shake us out of our complacency and force us to rely on God. Alternatively, we find in Tertullian’s words a consolation for the travails of our persecuted fellow believers around the world: they may be suffering right now, yet not only will they win an eternal crown, but also they are securing the future of the church in their countries in the here and now. So we tell ourselves.

Both of these tendencies are evident in the following statement, from the evangelical blogger, Nathan Pitchford. In 2006 he wrote:

But was Tertullian right? Does his epigram accurately describe the reality of church history?

We know that although the early church was made up largely of peasants, paupers and (as the Romans would have thought) inveterate revolutionaries and dubious oriental sorcerers, nevertheless, somehow this disreputable movement transcended its origins to sweep the Roman world; and it did so despite determined efforts, first by the Sanhedrin in Palestine and Syria, and then by officials of the greatest empire known in the world at the time. However, some of our ideas of the early Church and its place in the Roman Empire are inaccurate. Persecution was as not much a part of the story of early Christians as we often think. Christians didn’t have to face martyrdom frequently, at least not on a widespread scale. The popular image of cruel Roman governors regularly seizing brave Christians off the streets, torturing them, and then feeding them to the lions, is somewhat misleading. In fact, persecution, though often intense when it occurred, was usually episodic, local, and highly inconsistent. As James O’Donnell and Candida Moss have stressed in recent provocative would-be revisionist studies, probably the majority of Christians in the Roman Empire lived peaceful lives, like those of their neighbors, and passed to their rest without being disturbed by the authorities.[2]James Carroll, in his best-selling Constantine’s Sword, agrees: “violent oppression of Christians was relatively rare and sporadic.”[3]

There were persecutions under Nero in AD 64 (marked by what even contemporary Romans regarded as unusual cruelty—but it may have been limited to Rome and its environs) and in 81 (under Domitian, which again may have been geographically limited—the evidence is ambiguous). However, the next imperially directed persecutions (and possibly the first empire-wide campaigns against Christians) were in the 250s, when “the emperor Decius decreed that steps be taken to ensure that everyone in the empire . . . be shown to have sacrificed to the gods on behalf of the welfare of the state”, and then again in the early 300s, when the emperors Diocletian and Galerius launched what seems to have been a systematic attempt to uproot and discourage the practice of Christianity.[4] Even during the worst imperial persecutions, suspect Christians could easily avoid punishment, by performing a token public religious act. Those who refused were celebrated and commemorated in early Christian literature and art, but many quietly conformed in public, kept worshipping and taking the sacraments in secret, and resumed open Christianity when the persecutory laws were relaxed, which they invariably were.

O’Donnell, Moss and others go too far in claiming that suppression and persecution were largely irrelevant and had no lasting impact. After all, if “large-scale persecution of Christians by the Roman state was rare”, there were rather more ‘locally inspired’ bouts of persecution, which produced their share of martyrs. One of the best-known persecutions, in the province of Bithynia-Pontus by Pliny the Younger during the reign of Trajan (c.112), was one such episode of provincial oppression: but Christians were still killed! The number of deaths due to persecution is the reason why, by the second century, before the persecutions of Decius, Diocletian and Galerius, martyrology had become “a distinctive Christian literary genre.’[5] Furthermore, recent critics such as O’Donnell and Carroll demonstrate paucity of insight. As Martin Goodman argues, although Christians were subject ‘only to brief outbursts of organized, empire-wide persecution by the state . . . these episodes inflicted deep trauma.’[6]

Nevertheless, under the Roman Empire, most Christians, in most places, most of the time, did not have to choose between martyrdom and apostasy. Can it be said, then, that martyrdom was the cause of the church’s growth?

There is another point, too: there is little reason to think that the suffering of the martyrs—their heroic self-sacrificial witness—did move ancient people to convert to their faith. Having carefully analyzed such testimony as we have from third-century sources, Edwards concludes “that the strength of the church was lessened periodically by deaths and defections during persecution and that, when peace came, a number of the lapsed did not live long enough to complete the lengthy penances [that were typically] imposed [by the church] as a condition of their return.”[7] The fact that, by the second century and thereafter, “the church was large enough … to survive repeated massacres and lynchings,” as well as “the abuse … and the … ridicule” of sophisticated Latin satirists, truly testifies to the “patience of the saints”, or many of them—if they had not been willing to maintain their faith in the face of persecution, then of course the movement would have died out. Yet it is a mistake to attribute its growth to persecution. As Edwards notes, in fact, Tertullian’s epigram is the only ‘ancient testimony … that pagans were converted by the fortitude of martyrs.’[8]

In sum, while in the first century the blood of martyrs does seem to have been something like the seed of the church in the first century, allowing it to survive the sanctions of the Sanhedrin and Emperor Claudius, and the bloody persecutions of Nero and Domitian, this was not the case in the second century and after. Nor is this a coincidence, I think. The first century was the period when extraordinary miracles were still worked, as related in Acts. I believe God was more interventionist at this time than in any other era of Christian history, because He needed to be—the early believers were few in number and lacking resources; without direct divine assistance, the movement could have failed before it had begun. Just as the age of miracles largely passed with the death of the disciples, however, so God began to let us take responsibility for our own fate.

Consequently, if the blood of the martyrs was the seed of the church, it was because God directly intervened and worked miracles to make it so—not because that is the normal, mundane function or effect of persecution. As an historian of religious violence, as I survey the history of Catholic persecution of Protestants (and Protestant oppressions of Catholics) in early modern Europe, the Japanese persecution of Christians from the seventeenth through nineteenth centuries, and Muslim persecution of Christians across the Middle East and North Africa across many centuries, I am struck by how extremely effective persecution has been in disrupting evangelism and witnessing.

If we assume that the Seventh-day Adventist Church will flourish today where it is oppressed we are making an unwarranted assumption, one that can trivialize the sufferings of our persecuted brothers and sisters. Rather, we should, as scripture commands, “Continue to remember those in prison as if you were together with them in prison, and those who are mistreated as if you yourselves were suffering” (Heb. 13:3). We know that these victims of the Great Controversy will be honored in heaven; but on earth their sufferings may ultimately bear no fruit. It is a grim truth. And for that reason we should honor them and, in prayer, take our stand beside them, asking God to give them the strength to be faithful.

[7]Mark Edwards, ‘The Beginnings of Christianization’, in The Cambridge Companion to the Age of Constantine (Cambridge, 2006), 138.

David Trim is Director of the General Conference Office of Archives Statistics and Research.