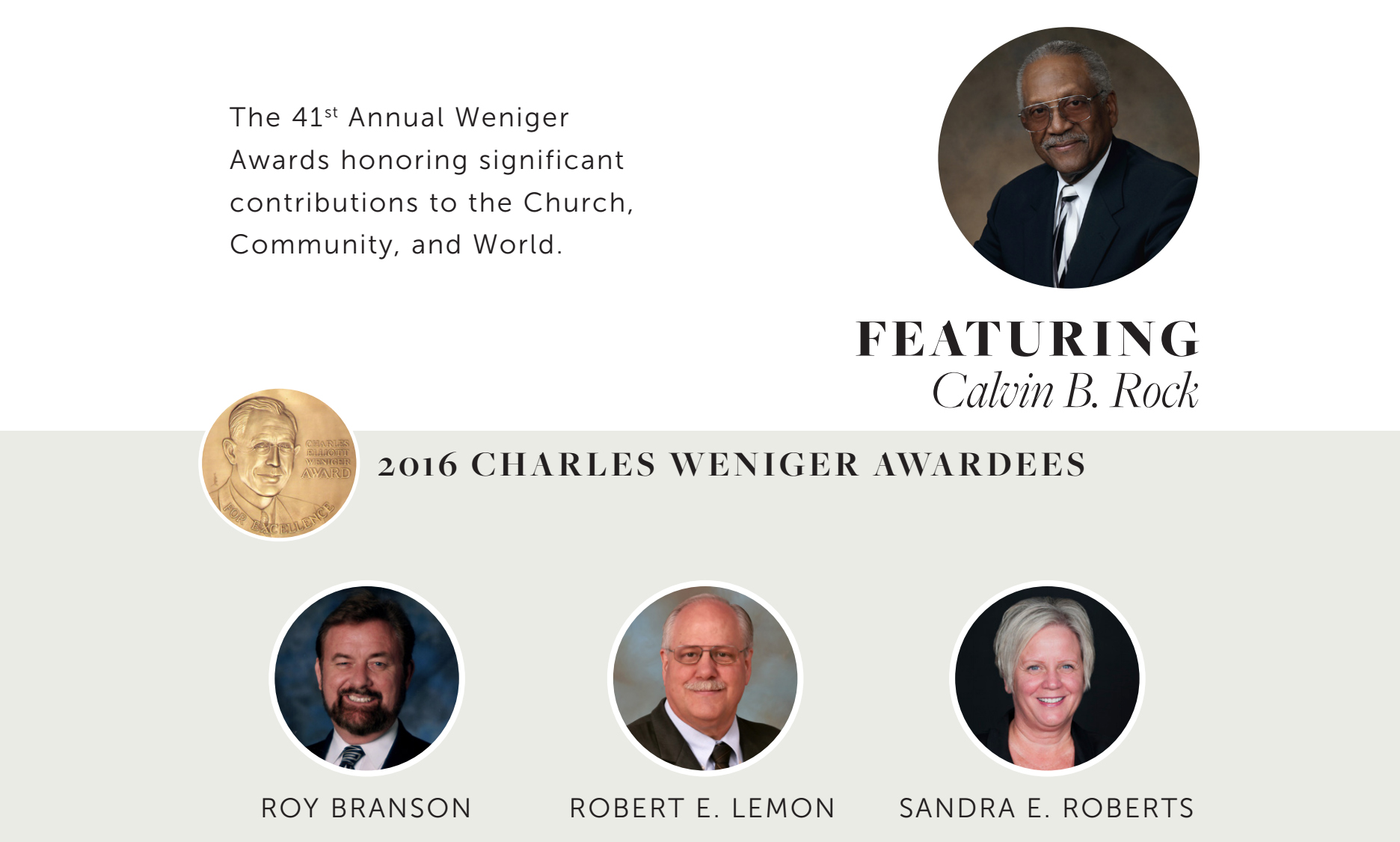 These annual awards by the Weniger Society are the Adventist “Oscars”. The recipients represent the best in Adventism and reflect the values of Charles E. Weniger, who during his life was the Dean of the Seventh-day Adventist Seminary where he inspired his students by example and expectation to strive for excellence. The Society began its awards program in 1974, and has now honored 166 individuals.

Roy Branson was a revolutionary of the imagination, according to Donna Carlson, his long time friend who accepted the award for him, given his untimely passing away in July 2015.

Branson inspired and mentored a generation of ethicists at the Seventh-day Adventist Seminary, Andrews University. He was one of the first Adventists to pursue graduate work on that topic, and immediately after receiving a Ph.D. in religious ethics from Harvard University in 1968, went back to the Seminary where his creative teaching caught the imagination of many students. Advocating for social justice was another passion that marked his life. As a graduate student he marched in the Civil Rights Movement in Selma, Alabama. More recently he joined the fight against the big tobacco companies. During the ten years that he spent at Columbia Union College (now Washington Adventist University), he started the Center for Law and Public Policy. Branson edited Spectrum, the journal of Adventist Forum for over twenty years. It was there that he helped give voice to new ways of looking at traditional Adventist ideas refreshing the concept of Sabbath, for instance, by talking about it as a gift from God rather than dwelling on the switch from Sabbath to Sunday. He also became an advocate for an independent church press. He spent the last eight years of his life at Loma Linda University, where he was associate dean of the School of Religion, a professor of religion and director of the Christian Center for Bioethics. The son of missionaries, Branson grew up in Beirut, Lebanon where his father was the founder of Middle East College and his grandfather was president of the General Conference.

Robert Lemon accepted his award, “on behalf of all the thousands of church treasurers, financial administrators, and auditors around the world — from the General Conference level up to the local church level — who work tirelessly in the service of the Lord,” he said. “It is these individuals, mostly unnoticed and unrecognized, who deserve the recognition.”

Lemon was elected treasurer of the Seventh-day Adventist world church in 2002, based on his extensive experience in various treasury functions around the world. Born in Kongolo, Zaire to missionary parents, mission has always been his passion.

He also brought a commitment to transparency to his work, as well as humbleness noting that we often think that it is our gifts that make possible the work of God when really God gives us the opportunity to give so that we can be part of what He accomplishes.

Sandra Roberts said that the award presented to her was really for all the people that God had used to form and shape her ministry. She talked about leadership being a team venture and that she felt she was just one more person with a baton in her hand carrying out the mission of the church. Roberts was elected president of Southeastern California Conference in October 2013, after serving as the executive secretary of the conference for nine years. Her career there also included four years as the associate youth director, and five years as an associate pastor of the Corona church. She has also worked as a chaplain at Loma Linda elementary and junior high school, as the general manager of Pine Springs Ranch, and a religion teacher at Modesto academy. She earned a Doctor of Ministry degree, with emphasis in leadership development and spirituality, from the Claremont School of Theology and a Master of Arts degree in religious education from Andrews University. The daughter of missionaries, Roberts is a world traveler. Her goal is to visit at least one new country every year. Her list of countries visited numbers more than 80.

Calvin Rock, a 1982 Weniger Laureate and former vice president of the General Conference, gave the Clinton Emmerson Annual Address at the Awards Ceremony. He discussed the varieties of administrative personalities and approaches within the General Conference during the time that he served there.