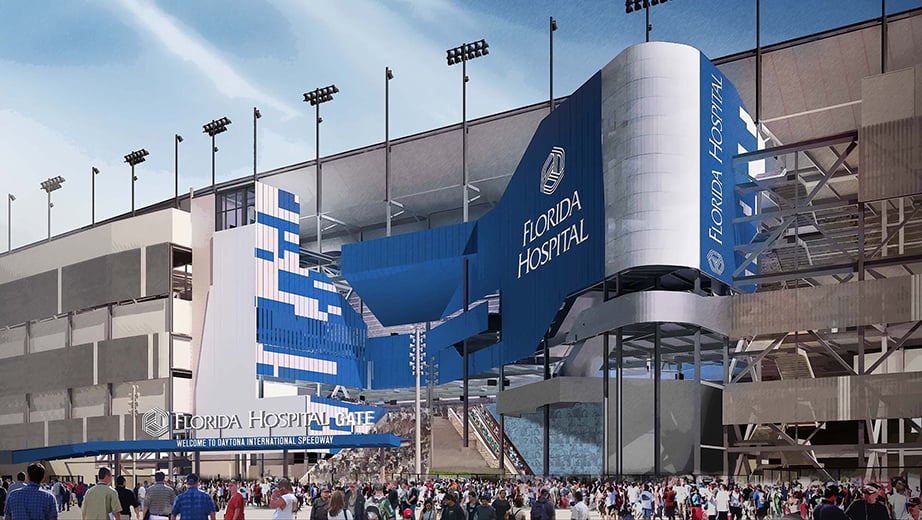 Florida Hospital, part of the Adventist Health System/Sunbelt healthcare network, will greet auto racing fans today at the Daytona 500, which kicks off the 2016 NASCAR season.

Florida Hospital has entered a 12-year partnership with the Daytona International Speedway in Daytona Beach, Florida. As part of the deal, Florida Hospital Volusia-Flagler replaces Halifax, the area’s largest public hospital, as exclusive healthcare provider for the speedway. During the Daytona 500 and other races at the venue, Florida Hospital will provide medical equipment and personnel for all the speedway’s motorsport events, managing the on-site care center and providing ambulance transport as needed.

As one of five founding partners in Daytona International’s $400 million DAYTONA Rising renovation project, which transformed the speedway into the world’s first motorsports stadium, Florida Hospital designed one of the stadium’s entrances (known as “fan injectors”), and with it, 20,000 square feet of themed engagement space. The Florida Hospital Gate, a.k.a. the CREATION Health fan injector, welcomes race fans near turn one of the racetrack with a large waterfall and a nature-inspired walkway.

A CREATION Health corridor inside the stadium features a C.S. Lewis quotation: “You are never too old to set another goal or to dream a new dream.”

When entering the CREATION Health injector, fans see an overhead tree canopy that transforms concrete and steel into a forest-like environment (think Rainforest Cafe feel, but without the thunderstorms and loud animals). The overhead canopy spans each of the four seasons and includes a starry night sky.

Daytona International Speedway held a free open house last Wednesday during which the public was able to tour the newly-renovated facility for the first time. 2010 Daytona 500 winner and Florida Hospital brand ambassador Jamie McMurray greeted fans in the CREATION Health “neighborhood” inside the stadium.

"Health care is changing and we hope to inspire visitors to live happier, healthier lives," said Rob Fulbright, chief executive officer of the five Florida Hospitals in Volusia and Flagler counties. "With this injector, and as the official healthcare provider of Daytona International Speedway, this partnership enables us to extend our healing ministry of Christ beyond the walls of our hospital and meet the community where they live, work and play."

Florida Hospital will also be a founding partner of One Daytona, an $800 million, 300,000 square foot project that will feature retail, dining and entertainment including a Bass Pro Shops outdoor gear store, a 12-screen Cobb Theatres movie complex, two hotels and 300 apartment units. International Speedway Corporation owns the 300-acre property, and plans to open One Daytona in 2017.

The foray into auto racing comes at a time of significant expansion for Florida Hospital. The not-for-profit health system operates facilities on 22 campuses throughout Florida. In January, Florida Hospital Orlando celebrated the grand opening of a 332-bed hospital for women. This month marked the ribbon cutting of a 97,000-square-foot, three-story facility in Winter Garden that will provide emergency care, outpatient surgery, lab and imaging services, endoscopy, and primary and specialty care. Florida Hospital also unveiled a new 80-bed tower in Kissimmee and plans to expand its emergency department in Altamonte.

Along with the growth has come increased scrutiny of Florida Hospital’s tax-exempt status. In a four-part series for the Orlando Sentinel, reporter Beth Kassab took a close look at the lucrative tax breaks afforded to Florida Hospital and Orlando Health, Florida’s two biggest not-for-profit health systems. Kassab examined how much Florida Hospital saves by not paying taxes, and what it provides to its surrounding communities in exchange.

“...many nonprofit hospitals look more like for-profit corporate behemoths than charities,” she wrote. “Consider that the local Adventist Health operation, which owns Florida Hospital, trades $4.5 billion in securities mostly through bonds, hedge funds and money market funds, according to its most recent tax form.”

Kassab asked whether Florida ought to consider hospital tax reform as other states have done.

Back at the speedway, Florida Hospital will have other things to think about today. The Daytona 500 features 200 laps of a 2.5 mile course for a total of 500 miles of racing at speeds approaching 200 mph. Film star Gerard Butler will instruct drivers to start their engines at 1:19 pm ET, and Baseball Hall of Fame inductee Ken Griffey Jr. will wave the green starting flag at 1:31 pm. The race is the first event in the NASCAR Sprint Cup Series.

Florida Hospital will have a substantial presence trackside and in the stadium as the racing season begins at Daytona International Speedway.