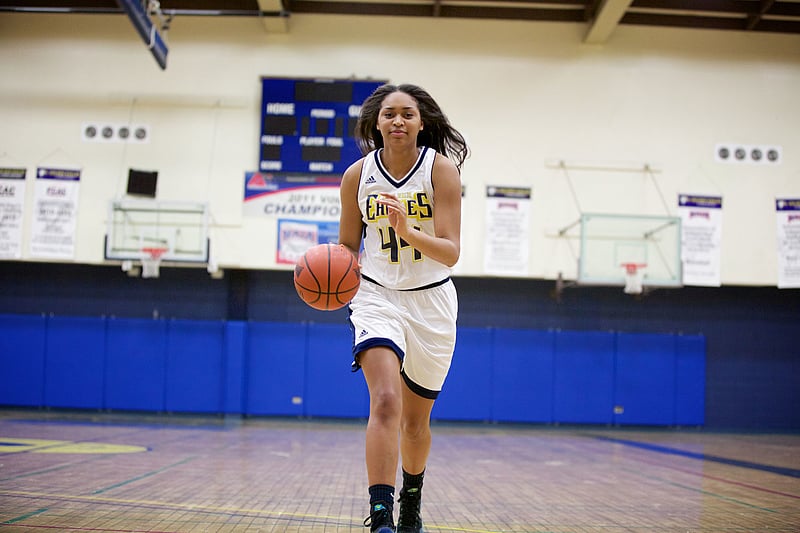 For most ambitious basketball-playing high school seniors, scholarship offers from top-tier universities would be a dream come true.

But for Alexis Davis, the golden opportunities with Princeton and Rider universities in New Jersey, the University of North Carolina, Howard University in Washington D.C. and others had one major drawback – their basketball teams played games on the Sabbath which she and her family had faithfully observed all of her life. Davis declined the offers.

Davis is now a freshman business management major and legal studies minor at La Sierra University as well as a member of the Golden Eagles women’s basketball team. A high-achieving high school graduate with a 3.8 grade point average, Davis has received sports and leadership scholarships and is the recipient of La Sierra’s $15,000 Presidential Scholar award.

At 6’3”, the 18-year-old serves as a valuable center forward for the Golden Eagles. La Sierra University is a member of the National Association of Intercollegiate Athletics and its teams participate in the California Pacific Conference. On the court, Davis loves to drive to the basket, her skill at dribbling evident as she controls the ball like it is a part of her. Her talents helped the team gain the advantage in a Jan. 17 conference opener against long-time rival Pacific Union College during which Davis scored 11 points.

“It’s nice to be at a place where basketball is a ministry. Sometimes you’re the only Bible they [non-Christian competing teams] will ever see. When you’re kind and respectful is shows a lot,” she said.

Brianne Carroll, new head coach of the women’s basketball team, said student-athletes have a unique opportunity to extend La Sierra’s strong spiritual emphasis to others. “It’s important that others see Christ through our team, whether it be in the way we react to a bad call on the court, or winning or losing with grace,” she said. “I want spectators to come up to us after a game and say, ‘your school seems different in a positive way, what’s La Sierra University all about?’ That opens the door to discussing our beliefs and I believe it’s a great way to witness.”

Regular church attendance was important to Davis’ parents, William and Paula Davis as they raised Davis and her brother, Justin. The family drove an hour to Capitol Hill Seventh-day Adventist Church in Washington D.C. every Saturday morning from their home in Stafford, Va. “My family always wanted me to be involved in Sabbath School, church choir and plays,” said Davis.

Davis’ values, work ethic and faith are also rooted in her upbringing. “My dad played a huge role in my development as a player by encouraging me to glorify God through playing, and spent almost all the free time he had helping me improve my game,” she said.

Davis played basketball in the Amateur Athletic Union in her area from the age of 13. Her coach was familiar with Adventist beliefs through an Adventist friend, and tried to accommodate Davis. “My teammates were also very understanding of my beliefs and always asked me questions about Adventism,” she said. “I felt like God placed me on that team so that I could witness to them and show them the type of Savior he truly is.”

The AAU is comprised of top players from schools in the region. The organization attracts the attention of university basketball recruiters and coaches who fill courtside seats during games to identify and evaluate potential recruits. The universities that offered Davis scholarships first attended games for about two years to watch her play. “If they like what they see, they contact the coach, then the university sends letters or makes phone calls [to the players],” Davis said.

A couple of the universities that were interested in recruiting Davis agreed to accommodate her Sabbath beliefs. But such an arrangement might have caused tension among her teammates. “ I had no doubt that there would be plenty of peer pressure from my potential teammates, classmates, and coaching staff to play on the Sabbath if they needed me,” she said. “If I chose to go to those schools, I wouldn't want to let my team down by not playing, and I wouldn't want to slip into any habits of playing on the Sabbath after spending my entire life observing it.”

“It was kind of discouraging. I felt like [basketball] was something I should be doing in college,” said Davis.

For Davis, remaining faithful to her beliefs brings rewards that exceed immediate opportunities and desires. “When you have that type of relationship with God, you realize He’s not taking things away from you, but allowing you to receive blessings when you listen to him,” said Davis.

“I’m extremely happy with my decision to play for La Sierra, and if I had to go back and do it all over again, I would make the same decision every time. I’ve already found a family through this basketball team and made memories here that will last a lifetime.”