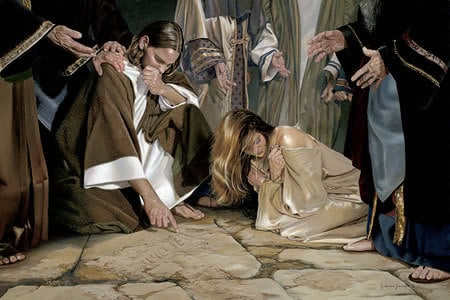 Jesus was growing in popularity. His list of accomplishments and feats was already the stuff of legend. He had already turned water into wine and cleansed the temple. He clandestinely explained new birth to a Pharisee and caused a commotion through one woman in Samaria. He had already healed the son of a nobleman and a man at Bethesda’s gate. He fed 5000 and walked on water. By the time we read John 8, Jesus has amassed a huge following, and in so doing has become a problem for the Pharisees.

To address this problem, the Pharisees devise a trap. They bring a woman who had been caught in adultery (in the very act they say) and ask Jesus for his counsel. But they make it clear that they already know what the answer should be. According to the law, they say, such people should be stoned. This is a dangerous question for Jesus. If He lets her go, they’ll accuse Him of disrespecting the Law of Moses. If He advocates stoning her, He risks losing His audience. Christ solves the conundrum by ignoring it. Instead of addressing the sin of the woman, he addresses the sins of the audience. “He who is without sin among you, let him be the first to throw a stone at her.” As so many other times in the Gospels, Christ respects and yet expands the old law. He has not said that she should not be stoned. Instead he has created a higher standard for those who would mete out punishment. Only those who are spotless, and therefore in the best position to judge, may execute judgment. Because no one qualifies, the query ends and the trap is foiled. Interestingly enough, Jesus is the only one who could stone her, and yet he chooses to extend grace.

There seem to be two lessons here. The first is the most apparent and comes from the conclusion of the story. Too often as Christians we forget that we are not much different from those whom we despise as “sinners.” We still struggle with sin in our relationship with Christ. We too find ourselves far from God at times, wondering like the Prodigal Son if we will ever make it home. We are as much in need of God’s grace today as we were before we came to know the Lord. Yet we look down on those who live sinful lives (in our opinion) and seem to be enjoying themselves. We forget that there was time when we enjoyed our sins. We forget that sometimes we still do. Christ’s admonition to the Pharisees that day reminds us that we should be careful who we judge and how we adjudicate punishment. We may find ourselves on the receiving end as easily as anyone else.

But there is another lesson here that interests me as a lawyer and as someone who studies the intersection of religion and politics. The Pharisees claim that this woman was caught in the very act of adultery. If this is true then there is a legal problem. Leviticus 20:10, which the Pharisees reference as the law in this case, clearly states that in cases of adultery, both the man and the woman are to be stoned. Where is the man who was involved in this situation? Why has he not been brought? Did they let the man go in their rush to bring a woman to Jesus to be stoned? It seems that in their zeal to uphold the law (or their way of life – after all this is done just as much to trap Jesus and ruin his ministry as it is to see justice done) they have actually violated it. I was reminded of this element of the story as I reflected on religious liberty and its misuse by those who would impose their religious mores on others. God’s law is based on freedom. Human beings cannot be forced to accept God and His laws. Those who would restrict civil marriage from homosexuals in the name of a Christian definition of marriage are making the same mistakes these Pharisees made. In their zeal to see their beliefs lived out in the lives of others, they violate the foundation of the very principles they seek to uphold. God does not compel anyone to follow Him. Instead, He stands at the door and knocks. (Rev 3:20) After there was no one left to accuse her Jesus said to the woman, “I do not condemn you, either. Go. From now on sin no more.” We would do well to follow Jesus’ example and extend grace to those who have sinned, as opposed to attempting to control whether they sin in the future.